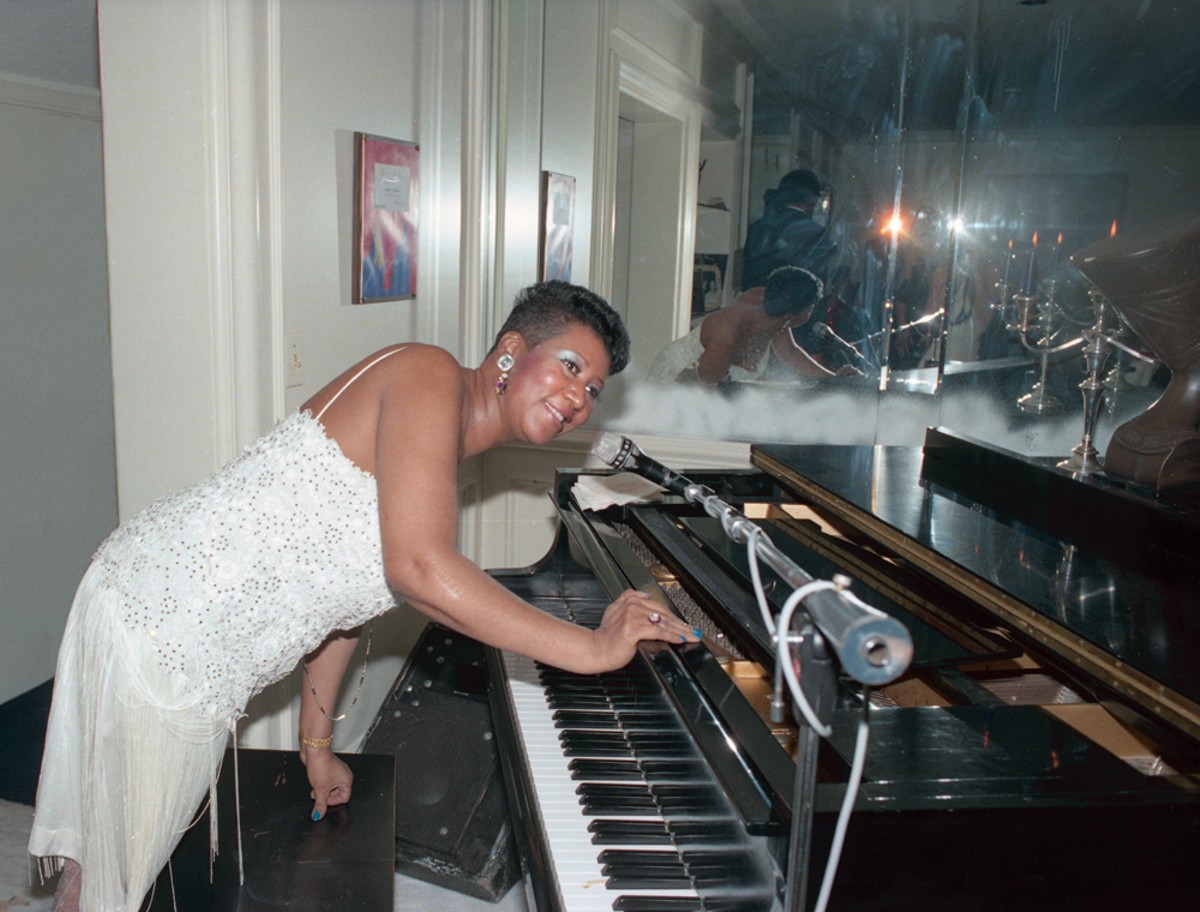 Aretha Franklin entertaining at her home during one of her Christmas parties. Courtesy of Linda Solomon

Sabrina Vonne' Owens doesn't remember the exact moment she was introduced to photojournalist Linda Solomon, but she estimates it was when her son LaRon, now an adult, was around 5 years old.

"She just seems to have always been there, quietly and unobtrusively in the background, capturing images of my family," Owens writes in the afterword of Solomon's latest book, The Queen Next Door: Aretha Franklin, an Intimate Portrait. Owens is Franklin's niece, who notably delivered a stirring eulogy at the Queen of Soul's internationally televised celebration of life last year at the Greater Grace Temple in Detroit.

Owens describes Solomon as a family friend, confidant, and trusted member of the press with a bright spirit and smile, adding that she is "humbled" Solomon had devoted so much of her life to documenting the life of her family. In turn, Solomon credits Franklin for giving her a chance at exclusive stories when she was at the start of her career. She also says "everyone in Detroit has an Aretha story." But few stories are like Solomon's.

A year before meeting Solomon, Franklin had returned to Detroit after years of international touring, living in New York and Los Angeles to tend to her ailing father, C.L., a celebrated minister and civil rights activist who spent years in a coma after he was shot during an attempted robbery. When Solomon first encountered Franklin, it was 1983. Solomon was a 29-year-old budding columnist and celebrity photographer for The Detroit News waiting outside of the local ABC affiliate studio to snap a single photo of Franklin, who was set to perform in front of a 75-person audience as part of a local talk show, Kelly & Company. Solomon says that Franklin arrived in her own Cadillac limousine, wearing a black turban and large square-framed glasses, and when asked if she could snap a photo for her column, Franklin agreed.

"So I said, 'would you mind if I take two photos of you performing in front of a small audience, she said, 'sure.' And that's all I did," Solomon says. "And I maintained that stance throughout our life as friends. If she trusted you, you were there for life. She gave me unprecedented access but she was so private and I'm so blessed that my career would cross paths with her during the most exciting years, the years when she didn't leave Detroit."

Solomon likens the collection to an album Franklin might keep on her coffee table, and credits her editor Annie Martin at Wayne State University Press, who was tasked with sorting through her massive archive to create a visual story. Martin, in turn, tasked Solomon with writing the story, which she does by annotating photos with context, memories, and hidden details not captured on film.

Both photos from that day in 1983 are featured in the first formal pages of The Queen Next Door, which is structured chronologically through 2007 and picks back up in 2018, after Franklin's death and is punctuated by events in Franklin's life, both big and small, where Franklin is often pictured with a cigarette between her fingers. They show benefit concerts, award shows, backstages at concerts, rehearsals, intimate family gatherings, lavish parties, and quiet moments, like Franklin escaping the lavish party to listen to her Sade records in her bedroom.

"She liked that first column," Solomon says of Franklin, who soon after called The Detroit News offices looking to reach Solomon to inquire about a photo assignment. The request was for Solomon to attend a private reception at the Manoogian Mansion following Franklin's benefit concert in support of her ailing father.

The book, Solomon says, is a tribute to both her and Franklin's family, which, over time, became one. Solomon's mother joined her in 1993 when she covered Franklin's one-night-only duets concert, where the Queen of Soul famously took to the stage as a ballerina. In 2018, Solomon was selected to photograph the family's private memorial ceremony for Franklin.

She says that Franklin's devotion to her family is unparalleled. "I have photographed celebrities for years, and the only time you see celebrities with their families is at the Oscars — they never bring their families around. They just don't," she says. "But Aretha didn't go anywhere without her brother, her sister-in-law, her nieces. It was fabulous to see that she involved them in every exciting moment of her life."

One of Solomon's favorite captures of Franklin, included in the book, is one from 1986 in which she can be seen wearing a shimmering sequin shift dress and nylons without shoes, slinking into the corner of a gray sectional couch with her finger pressed into her ear while backstage at the Premier Center in Sterling Heights. Franklin was awaiting the results of the American Music Awards, during which she won both categories she was nominated in, Favorite Soul/R&B Female Artist and Favorite Soul/R&B Video Artist. The video of Franklin accepting both awards lives online. She dedicates her win to her late father and fans that joined her on the "Freeway of Love," but Solomon's photo captured something else entirely: apensive and vulnerable moment seen by very few. Solomon says it came down to trust.

"She trusted me," she says. "She let me photograph her without makeup. You know, when she did her first concert with the DSO, I was standing next to her onstage and she let me shoot her without makeup and she didn't say I need photo approval or anything like that. So I think this book will show Aretha as the lady next door, which she has often said. Her famous quote is, 'I'm the lady next door when I'm not on stage.' And it's very, very special to see her in her authentic self as a natural woman because she could be her authentic self in Detroit."