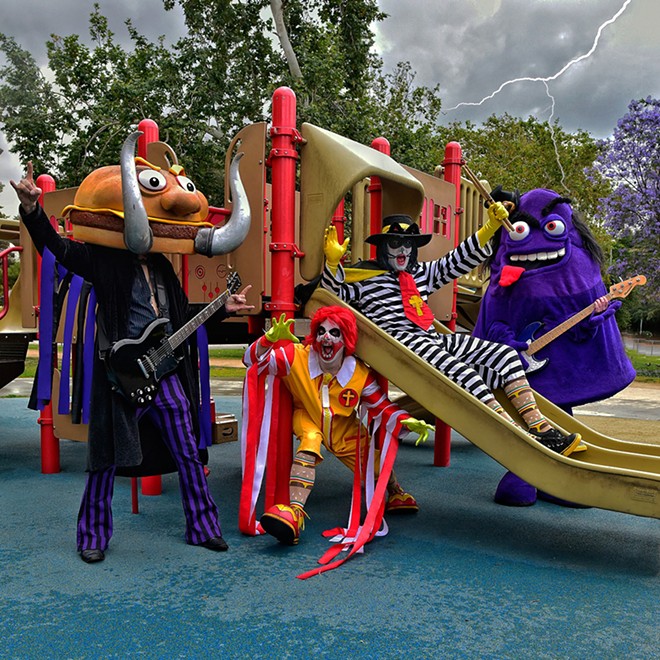 He’s the man in charge of Mac Sabbath, the world’s greatest drive-through metal band that’s made up of twisted dopplegangers of McDonaldland inhabitants led by a creepy clown who’s got a problem with fast food and sings about it via Black Sabbath songs.

An instant sensation after Black Sabbath posted its video for “Frying Pan,” a reworking of “Iron Man” on Facebook and Twitter on New Year’s Day 2015, Mac Sabbath burst out of Southern California and has been wreaking its fries-meet-heavy-rock havoc around the world since then.

Odd, who’s the spokesman for the band — the members remain anonymous — was recruited as manager in part because he has his own “theatrical horror rock band,” Rosemary’s Billygoat, and in part because he’s an admitted weirdo.

“When you’re a weirdo you hold certain things near and dear,” Odd says in a recent phone interview. “Black Sabbath invented heavy metal, punk rock, goth, everything that’s cool if you’re a weirdo. If you look at 1970 when ‘Paranoid’ came out, there was nothing that fast, like a modern punk rock song. In the late ’60s, there was nothing as creepy and ominous as Black Sabbath. They’ve really influenced everything you love if you’re a counterculture weirdo. And there’s no bigger weirdo than Ronald.”

Ronald would be Ronald Osbourne, the twisted genius behind Mac Sabbath, who bears a striking resemblance to a certain clown from the fast-food chain that shall not be named — for copyright infringement purposes — and shares his last name with Black Sabbath’s star, Ozzy.

He’s joined in Mac Sabbath by cheeseburger-headed guitarist Slayer Mac Cheeze, gumdrop-shaped bassist Grimalice (who may or may not be related to Grimace), and drummer Catburgler, a particularly twisted cross between the Hamburgler and the Catman from Kiss.

“A lot of people look at it and think it’s pro-fast food culture thing,” Odd says. “In the same way they look at Black Sabbath and they’re doing a commercial for evil at large. Then you break down the lyrics and they were making a warning about evil. This is a warning about fast food and the evils it will do to your soul.”

In Odd’s telling of the story, he was recruited by Osbourne — Ronald, not Ozzy — while eating at a burger joint in a Chatsworth, California, and taken to a band performance underneath another fast-food eatery in the San Fernando Valley.

The band began playing shows around California. Then came the social media posts from Black Sabbath.

“That’s what really made it happen,” Odd says. “You’ve got to give it up to Black Sabbath, not just for influencing the band, but for promoting the band. It wouldn’t have gotten to this level if they didn’t get the joke and support it.”

The Black Sabbath post landed the band an invitation to play England’s Download Festival, along with Kiss, Judas Priest, and Motley Crue. Returning to the U.S., Mac Sabbath got out of California and has extensively toured the United States, continuing to connect with fans around the country.

Why has that occurred, Mr. Odd?

“There’s something that happened with these characters and Black Sabbath,” he says. “I guess it’s the way they work together so well. They’re both so psychedelic and ’70s and creepy at the same time. There’s something about the nature of people who like Black Sabbath that relates to the cheeseburger culture as well — for reasons that don’t need to be enumerated.”

Mac Sabbath is all over YouTube. But the band has yet to make a studio album.

“There’s a possibility (of a studio record), but that seems to be a difficult thing to achieve,” Odd says.

So, for now, Mac Sabbath exists only on stage, where it brings its thundering chaos with Grimlice shredding and Osbourne being Osbourne.

“It lasts a little over an hour,” Odd says. “It depends on Ronald. He’s not very predictable. There’s a good eight to 12 songs depending on what happens.”

So, Ronald gets a little out of control?

“The problem is that he is in control,” Odd says. “It’d be nice if I could control him at all. You’re talking about a disturbed clown who maintains he’s traveled in the time-space continuum from the ’70s to warn us about the evils of fast food and to get us back to the ’70s when music and food was still genuine. So you have a person — I don’t know if person is the right word — you’re looking at an entity who is constantly battling technology. There’s always a backlash. Sometimes, it’s hilarious. Sometimes it’s not so hilarious.”

What it ultimately is is good, clean, loud rocking fun for the whole family — at least that’s how Odd sees it.

“One of the most amazing things about it is it looks like this big scary, gnarly thing with these laser-eyed skull clowns and this heavy creepy music, this absolute heavy metal evil thing,” he says. “When you break it all down after it’s over, everything he’s doing is a kid friendly, family thing. There’s no R-rated stuff in there. No sex or drugs or anything of that stuff. Ronald doesn’t work blue. It’s an entertaining thing the family could enjoy.”