OUT COME THE FREAKS

From all accounts, Detroit expatriates Was (Not Was) delivered one helluva show in Los Angeles last Thursday night, February 14th. It was the first show "the Was brothers," Don and David, have performed in the city of Angels in quite a few years, this one to kick off the hype for their brand-new album Boo!, which hits the streets on April 8th. Most of the old Was (Not Was) crew, including original lead singers Sweet Pea Atkinson, Sir Harry Bowens and Donald Ray Mitchell, was on board for the show, which took place at downtown's elegant Orpheum Theatre.

But the real news was the special guest stars who showed up for the show in the form of Kris Kristofferson and legendary Beach Boys architect and tortured genius Brian Wilson. The pairings did make some sense; Don Was produced Kristofferson's 2006 album, This Old Road, and was the executive producer and director of the late '90s documentary on Wilson, I Just Wasn't Made for These Times. Was also produced the soundtrack for that film, which featured Was (Not Was) backing Wilson up on his Beach Boys classics.

Nevertheless, jaws dropped when Kristofferson sauntered out to deliver such hits as "Sunday Morning Coming Down" and "The Silver Tongued Devil" with the band, and they nearly hit the floor when Wilson appeared to sing "California Girls," "God Only Knows" and -- best of all -- "Row, Row, Row Your Boat." (The band threw a similar guest star-filled L.A. show at the Mayan Theater in 1991, featuring such superstars as Elton John and Iggy Pop, to promote their then-new album). The evening culminated with an encore version of Kristofferson's classic "Me and Bobby McGee," which, according to those in attendance, was close to a free-for-all, with everyone onstage. Wrote L.A. Times critic Ann Powers (who also quoted past MT scribe and CREEM website editor Brian J. Bowe in her piece): "Don Was declared it time for an encore, and the band and all guests (including the wonderful Jill Sobule, who opened) joined in on a Tex-Mex version of Kristofferson's "Me and Bobby McGee." Wilson did a knee-slapping dance stage left; Bowens and Kristofferson shared a mike. It was chaos. Good chaos. The kind that happens in that mythical Detroit, the one Was (Not Was) still brings to town."

Here's hoping that Don had the foresight to videotape that encore... and we'll be able to see it soon on his wasmopolitan website. You can read Powers' entire review here. 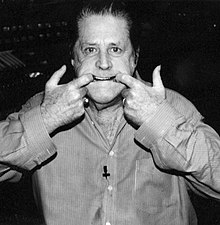 Mr. Wilson: just not made for these times...