One of the major musical pre-Christmas events takes place this weekend in nearby Ann Arbor and Ypsilanti. Mittenfest II, a two-day, three-venue holiday benefit music festival, is described by organizer/promoter Brandon Zwagerman as “an ode to the winter season, our hand-shaped peninsula, the local music community, and non-profit youth writing center called 826michigan.” Things kick off on Friday, Dec. 21st at the Blind Pig, where Starling Electric, Canada, the Decks and Lightning Love will take the stage, with between-set music provided by DJ Jason Gibner.

But that’s not all. As the night progresses, a pied piper will lead a procession from the Corner Brewery to Ypsi’s Elbow Room, where even more acts are slated to play, including Charlie Slick, Deastro (one of the most talked about local artists of the moment), the Mighty Narwhale, Champions of Breakfast and Chris Bathgate. Will Yates of the Pop Project and Zoos of Berlin will be spinning between sets. All proceeds ($7 to $10 at the Blind Pig; $5 at the Corner Brewery and Elbow Room) will go to benefit 826michigan, a non-profit organization dedicated to supporting students, ages 6 to 18, with their creative and expository writing skills, and to helping teachers inspire their students to write.

Great cause. Fine way to stay warm (excluding that pied piper trip outside) on a cold pre-holiday weekend in the Mitten State. 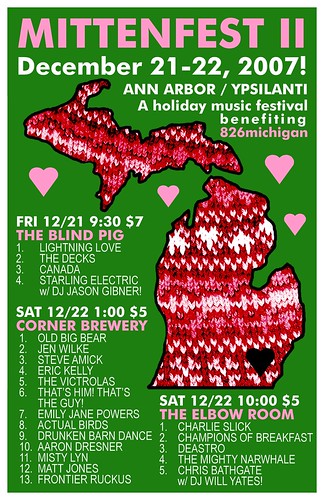