Dozier co-wrote some of Motown’s biggest hits like ‘Baby Love’ and ‘Stop! In the Name of Love’ 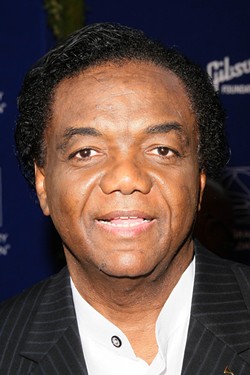 s_bukley/Shutterstock
Lamont Dozier at the Grammy Foundation's Starry Night Gala in Los Angeles in 2008.
Stop in the name of love: Motown songwriter and producer Lamont Dozier has died.

The New York Times reports he died on Monday in Arizona. His death was confirmed by his son, Lamont Dozier Jr. in an Instagram post Tuesday morning. He was 81 years old, and the cause of death is unclear.

Dozier was one-third of Motown’s Holland-Dozier-Holland team who wrote and produced some of the label’s most popular jams. “Baby Love,” “Stop! In the Name of Love,” and “How Sweet It Is (To Be Loved By You)” all have the trio’s genius songwriting behind them.

Dozier passed away the same day Detroit’s Motown Museum unveiled several upgrades and plans to reopen following a year-long closure due to flooding and construction.

Holland-Dozier-Holland, which included brothers Brian and Eddie Holland, was on a roll in the 1960s, writing back-to-back Motown hits. The Supremes, Marvin Gaye, and the Four Tops have Dozier and the Holland brothers to thank for producing some of their most well-known songs.

Together they penned 10 No. 1 songs for Diana Ross and the Supremes, including “Where Did Our Love Go” and “You Can’t Hurry Love.” They even wrote the Supremes’ first hit in 1963, “When The Lovelight Starts Shining Through His Eyes.”

The group split from Motown over legal disputes concerning royalties in 1968.

Branching out, Dozier would go on to help produce Aretha Franklin’s Sweet Passion album and co-write Phil Collins' “Two Hearts” from the 1988 film Buster. The track won both a Grammy and Golden Globe and was nominated for an Oscar.

Dozier was born in Detroit on June 16, 1941. How sweet it is for our ears to have been graced by his songwriting over the years.

After living in Japan and traveling across Asia, Randiah Camille Green realized Detroit will always be home. And when she says Detroit, she's talking about the hood, not the suburbs. She has bylines in Planet Detroit News , Bridge Detroit , BLAC magazine, and Model D . Her favorite pastimes are meditating...
More
Scroll to read more Music News articles
Join the Metro Times Press Club