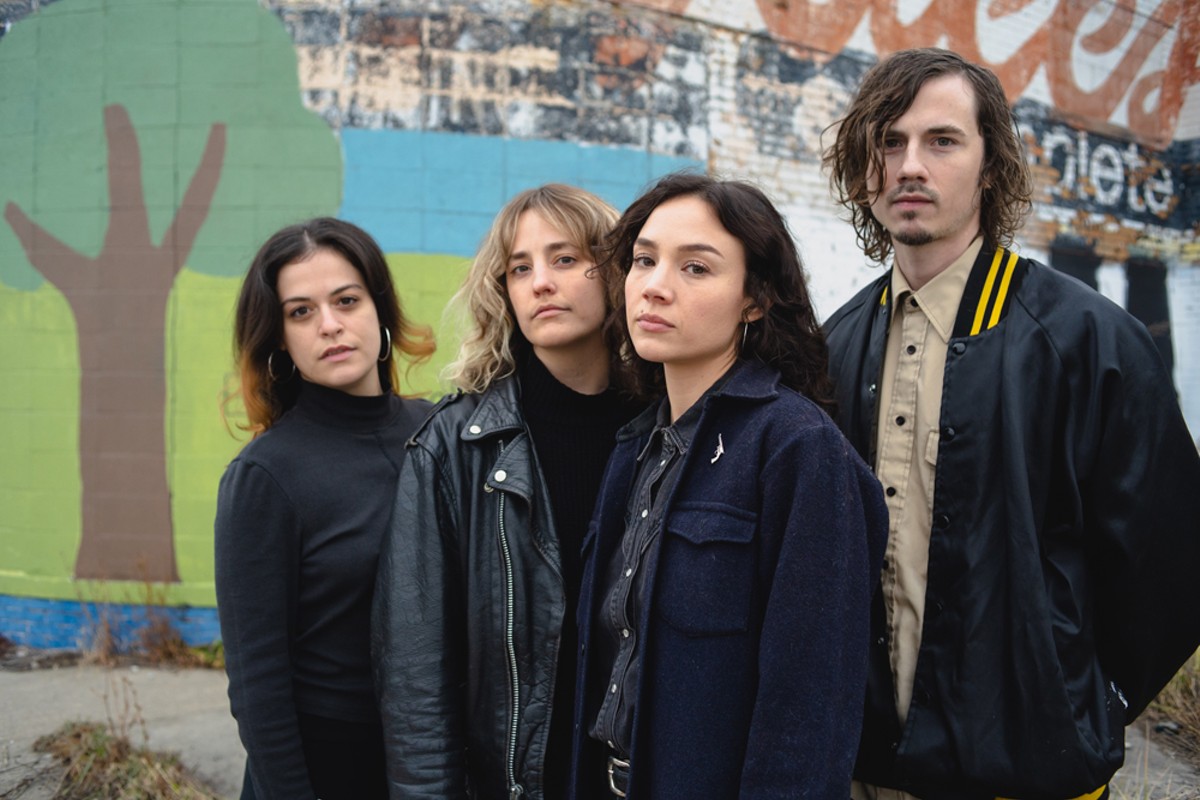 Just 10 minutes into our conversation at the Hamtramck bar Bumbo's, three-quarters of the band Monica Plaza is crying.

After discussing whether or not members Tia Fletcher, Jen David, Holly Johnson, and Donnie Gretsch had interesting stories or meaning behind their birth names (David was named after Jeff Bridges' love interest in the 1984 John Carpenter romantic sci-fi flick Starman, and Gretsch was almost born Sydney), and what inspired the band name (a perfectly stuck-in-the-'90s strip mall Fletcher used to drive by when she lived in Los Angeles), the waterworks begin.

"I've definitely cried during practice," Fletcher says. "We have a great dynamic. Everyone is playing very emotionally."

Johnson and Gretsch also admit to getting emotional at rehearsal every now and then.

A self-described melancholic romantic, Fletcher co-owns Bumbo's, writes the music for and sings in Monica Plaza, and describes the project, which formed in May 2019, as being a "lifesaver."

"Within this year, I went from feeling, like, really weak and afraid to feeling really strong and brave enough to be vulnerable," she says. "I've had just like a really transformative year, and I had all this stuff stored up that I didn't tell anyone about and that's why I really had a catalog of stuff. The only way I could express any of this was by writing all these songs to myself," she says. "And I think you guys are my support system," Fletcher says, waving away tears. "I had this [band], which was like a total lifesaver. It gave me value and gave me an outlet."

You won't find any Monica Plaza tunes online, but the band has its sights set on recording a full-length record this year, which, in terms of actual material, is basically in the books already. David describes the band's output so far as a cross between "a David Lynch soundtrack and Mazzy Star." In an unreleased demo of a song tentatively titled "Easy Wanting," Monica Plaza mirrors the devastating weight of the Smiths' "Please, Please, Please, Let Me Get What I Want," calling to mind slow dancing with someone while your gaze fixes on the person you once loved, and still love, who too, is dancing with someone else. In other words, a sonic punch in the gut.

The band started with Fletcher and Gretsch, whom Fletcher met and enlisted through Bumbo's. David is best known locally for, well, a bunch of things. She owns Third Wave Music in Midtown, frequently hosts karaoke nights around town (during which she performs a stunning array of tunes from Dolly Parton to Eminem), and she plays with her husband in Jenny & Jackie. David says she and Johnson, known for membership in Detroit's Double Winter as bassist and vocalist, were in search of a project that would allow them to focus on less front-facing musicality.

"I had never played bass before in a band or ever," David says. "The only way you can really learn an instrument, for me at least, is to start a project with it."

For Johnson, Monica Plaza allowed her to return to one of her first loves: drums, though she's had to learn to "soften" her "thrashy shoegaze" ways once explored by her membership in Real Ghosts. And for Gretsch, this is his first formal band.

For the band, the project has been about risk. Fletcher admits to still being nervous performing as she likens Monica Plaza material to reading her "diary," but says it feels good.

"It's just another challenge of my bravery, in a way," she says. "I guess we all set personal goals for our own growth. And one thing for me is to always try to get over something that I'm afraid of."

"We all had something that we wanted to accomplish and fear to overcome, and we're all doing it," Fletcher says. "It's really cool."