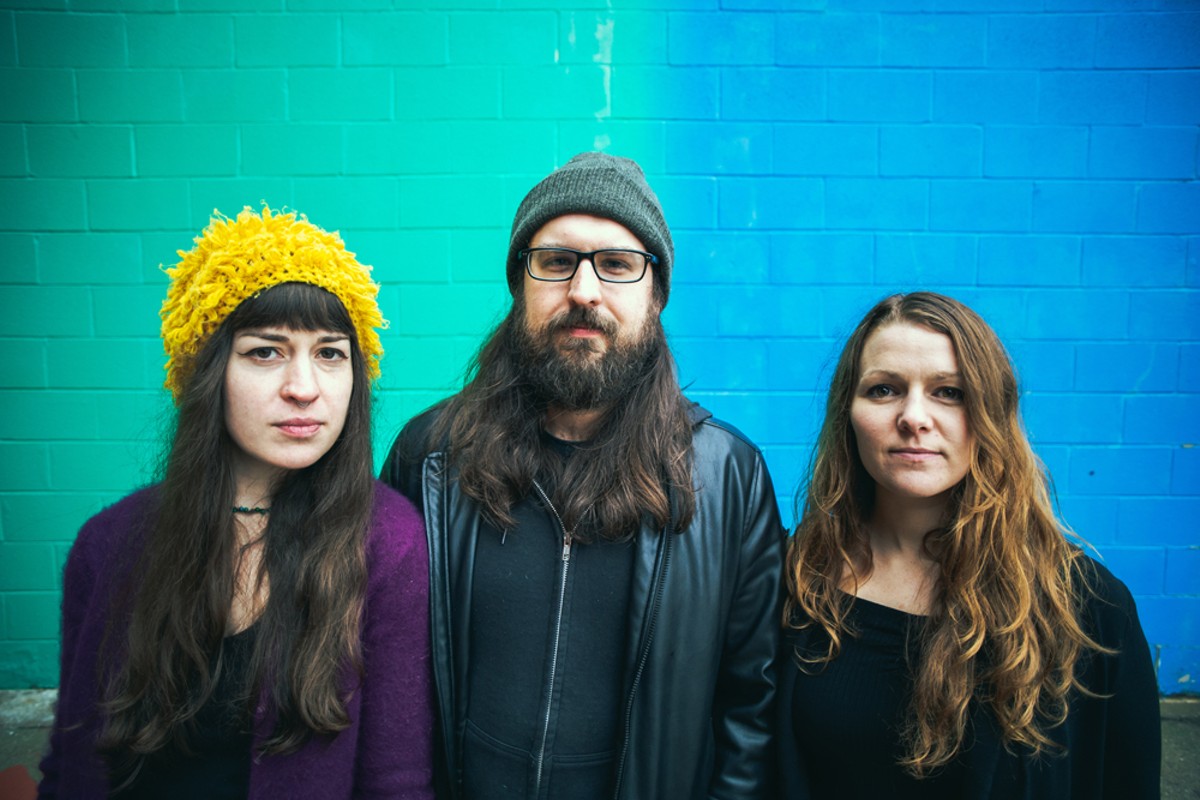 Sometimes your band doesn't have a drummer, but you book your first show anyway. Necessity breeds invention, or in this case, discovery. That's what brought guitarist Kely Markley and bassist Nadine Chronopoulos to their drummer, Matt Densmore, the final and integral piece of the sonic puzzle that is Milk Bath.

Markley and Chronopoulos started jamming together in early 2018. Both have been musicians for some time, but neither was regularly playing when they met. "We saw this as a need," Markley says. "Nadine was hungry to play, I was hungry to play." Densmore, too, hadn't played in a band for several years before Milk Bath. The timing was right.

After a year, their first show loomed and they finished five songs in less than a month. Two made it onto a demo they recorded live at Outer Limits Lounge, which is home base for the band for many reasons: Chronopoulos bartends there, the majority of the band's shows have been played there, and its first album will be on the house record label. Before that's released, however, they have another recording in the works: a 7-inch out on Third Man Records, recorded by Warren Defever and sure to be as fierce as the demos.

The demos include "Spy," a song about the imagined lost art of face-to-face espionage, and "Φωτι," which translates to "Fire" and borrows lyrics — sung in Greek — written by Chronopoulos' uncle to cover the Bob Marley song "Burning and Looting."

"His lyrics talk about how there's no way of living free, nobody is fighting for anything, and we're just scared," Chronopoulos says. The two tracks immediately seem conceptually connected. "All of our songs have some sort of connection politically, 'cause we're angry," Markley says.

"As someone who doesn't write the lyrics, as much as the songs have these similar themes, I feel like we're not a political band," Densmore says. "We're just a band, but in today's world, how do you not write about that stuff?"

"It's the situation we live in," Chronopoulos adds. "With the music, we tend to be aggressive, but most of the time, the songs are written very mellow and sweet. And because of this feeling we have, they end up becoming hell."

Though the music is decidedly rock, the band is not afraid to follow their songs through different styles, which results in a sense of freedom. As Chronopoulos puts it, "Why not do something that's not supposed to happen there?"

To illustrate, Markley tells a story. "We came off stage in Fort Wayne and this guy just got up in my face and said, 'What are you? What kind of music are you playing?' I'm like, 'You just heard us. What the fuck kind of question is that?'" She laughs. "I said, 'I don't know.' He goes, 'You're punk as fuck.'"

"But it's not!" Chronopoulos says.

"But it's not," Markley agrees.

Densmore points out that they're not trying to be the fastest or heaviest. "The fact that he had to ask, 'What are you?' before he said we were punk, clearly he knows we're not in that category," Markley adds.

But he still felt the need to label them. This need to explain things is a persistent one, but Chronopoulos doesn't see its value: "What's going to happen if you don't know what [something] is?"

Milk Bath defies explanation, demanding to be experienced instead. Don't be like that guy in Fort Wayne. Watch, listen, and revel in the mystery. Meaning is there, but it doesn't need to be stated up front. It's an expression, a mood, a guttural scream released in the twilight of our fucked-up modernity. Let yourself feel that, and you might learn a thing or two.