The band promises both nights will have completely different set lists 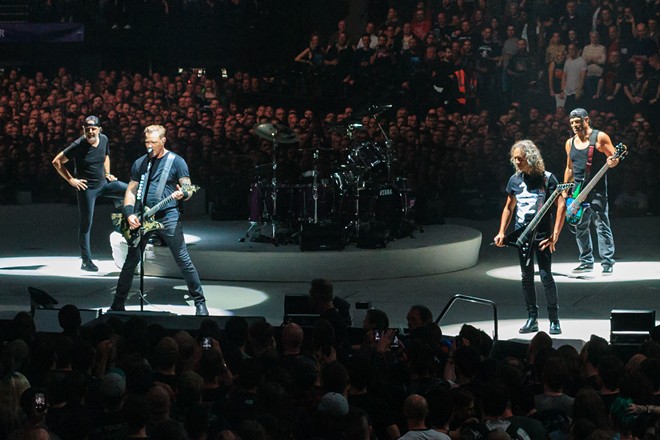 The heavy metal stalwarts in Metallica have a new album, 72 Seasons, slated for release in April, and on Monday they announced a world tour to support it with a stop in the Motor City.

The “M72” tour is a mini-festival of sorts, with the band playing two shows in each city, and promising not to play the same set list twice. Detroit’s shows are scheduled for Friday, Nov. 10 and Sunday, Nov. 12 at Ford Field.

The dates will feature an “in-the-round” stage set-up surrounded on all sides by fans. In a post on metallica.com, the band also says, “Most of the shows (sorry, not all — we tried!) will be on Fridays and Sundays, so we’ll be sure to have lots of extracurricular events for you to hang with fellow Metallica fans at before the shows kick-off and on the Saturday night in between.”

Michigan’s rock ’n’ roll revivalists Greta Van Fleet will also join the band on the tour, but not for the Detroit dates. Pantera and Mammoth WVH have been announced as the support acts for the first night in the D and Five Finger Death Punch and Ice Nine Kills on the second.

Tickets for access to both nights go on sale at 10 a.m. on Friday through Ticketmaster. Tickets for individual nights will be available starting on Jan. 20.

A portion of proceeds from tickets go to the Metallica’s All Within My Hands foundation, which supports grants for career and technical education programs in the U.S., aid for people experiencing food insecurity, and disaster relief efforts worldwide.

You can listen to the first single from 72 Seasons, “Lux Aeterna,” below.