Men at Work frontman Colin Hay is still at work

The ‘Business as Usual’ hitmaker performs in Royal Oak 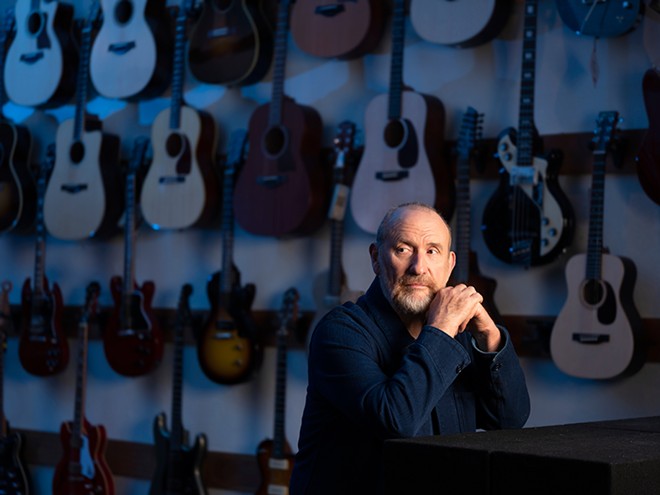 Look at any summer tour schedule, and you'll find plenty of bands and solo artists that are essentially living off of their past. They fill big amphitheaters (and even stadiums) even though they haven't had a hit in decades. Some have even stopped making new albums because they've found their audiences just want to hear the songs they know. The fans come out to the concerts to hear those tunes live and relive the time those songs formed part of the soundtrack of their lives.

That's all fine and good. But Colin Hay is not one of those artists. This singer-guitarist, who enjoyed huge popularity during the 1980s fronting the Australian band Men At Work, finds that not only are his fans not overly interested in those hits of yesteryear, they want to hear new music from Hay to go with songs from the 14 solo albums he's released since Men At Work broke up in January 1986.

"I'm very lucky in that way. I'm very grateful for the fact that that is the case," Hay says in an early March interview from his home near Los Angeles. "I think it would be a bit glum if they were just coming along for a couple of songs. "

The demand for fresh music is one reason Hay remains focused on writing and recording new songs. He has just released his latest album or original material, Now and the Evermore, which arrives roughly a year after Hay put out an album of cover songs, I Just Don't Know What to Do with Myself.

Hay was well along with the Now and the Evermore album in 2020, and in fact planned to release the album that fall. But the pandemic hit, and sent Hay home to Topanga Canyon that spring, where he did what songwriters do. He kept writing songs, eventually recording more than 20 tracks, of which 10 were chosen for the album.

"We ended up with this bunch of 10, for various reasons," Hay says. "But it seemed to be just kind of a mood that was created with this particular batch of songs that I liked."

He adds, "It's always a little strange talking about your own work in a way, but I think there is a lot of beauty in the record. When I listen to it, there's pain involved with that beauty as well, but that's the way things are in this world. But I love the way it turned out in that sense."

After finishing Now and the Evermore, Hay was still at home waiting for venues to reopen so he could return to touring. One day, he was in his home studio and thinking about Gerry Marsden, the frontman of Gerry and the Pacemakers, who had recently passed away. Hay started strumming and singing that group's hit song "Don't Let the Sun Catch You Crying." Liking how it sounded, Hay recorded the song and sent the file to a long-time collaborator, Chad Fischer.

"I thought it sounded nice with just an electric guitar and a voice," Hay says. "I sent it to him and said 'What do you think of this?' And he said 'Oh, I love it.' And he orchestrated some stuff, put some stuff on it and sent it back."

Soon Hay was recording his guitar-and-vocal versions of other songs that connected him to moments in his life and sending them to Fischer, who added orchestration and other parts. It became apparent they were making a covers album.

In the end, Hay and Fischer chose 10 covers, including the aforementioned Kinks classic "Waterloo Sunset," a pair of Beatles songs ("Norwegian Wood" and "Across the Universe"), the Jimmy Webb song "Wichita Lineman" (which Glen Campbell made famous), and of course "Don't Let the Sun Catch You Crying" and the title track, a Burt Bacharach/Hal David song that Dusty Springfield turned into a hit. Touring to promote the two albums won't be all that keeps Hay busy in 2022. Shortly after he finishes the current solo trek, he'll join Ringo Starr for this year's Ringo Starr and His All Starr Band tour. (Hay wrote the title song of Starr's most recent album, "What's My Name," and the Beatles drummer plays on the song "Now and the Evermore.")

Then later this year, Hay will team up with Rick Springfield and John Waite for a tour in which he'll sing and play guitar for his new version of Men At Work.

That Australia-based band enjoyed major success, beginning with the 1981 debut album, Business as Usual. It spawned the No. 1 hit singles "Down Under" and "Who Can It Be Now?" and the album itself spent 15 weeks atop the Billboard 200 album chart. That debut was followed by another hit album, Cargo, in 1983, which included two more hit singles, "Overkill" and "It's a Mistake."

But the band ran into internal issues after that, and broke up after releasing a third album, Two Hearts, which failed to come anywhere close to the success of the first two albums.

Hay still enjoys the Men At Work material, too.

"It's really exciting and the audience really loves it. It's because of the fact that that music has got some kind of timeless quality to it," Hay says. "It just feels like it always did whenever I play those songs."