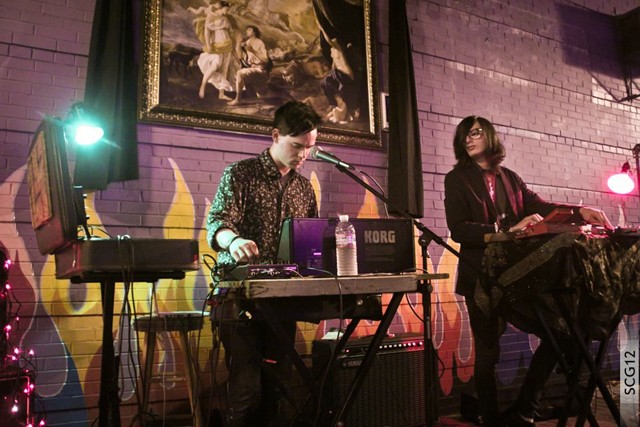 It's a change from his last band: Keyboardist Michael Mars shares in the spotlight with with slide guitarist Stefan Carr.

When Marco Polio & the New Vaccines burst onto the Detroit music scene a half-decade ago, they confused and confounded as much as they excited and enthralled. When we wrote about the band back in March, we said that it "cranks up the crazy to an entirely new high." That description wasn't unfair. The core duo of vocalist and looping maestro Steve Puwalski and guitarist, programmer and keyboardist Michael Mars created an insane noise that referenced Suicide, Kraftwerk, Devo, Eno and Zappa, among many others.

Mars was always the quiet, mysterious one, hanging behind his shelves of keyboards and other electronic toys and just looking very cool. Puwalski, an incredible frontman, would fly all over the stage and often into the crowd, literally pulling audience members into the show. So what happens when the pair parts ways, at least temporarily, and Mars fronts an all-new project called Michael Mars & the God Particle, with the focus almost entirely on him?

Here's the thing: While there are musical similarities between Michael Mars & the God Particle and Marco Polio & the New Vaccines, the aesthetic is rather different. It isn't, however, any less compelling. Mars generally stands alongside his new bandmate, slide guitarist Stefan Carr, both still, when before he would stand alone while Puwalski went seven shades of apeshit at the very front of the stage or completely off it. While a MP&TNV show felt like a kind of musical cult meeting, like a love-in with Charlie Manson, a God Particle show feels like we're observers in a musical laboratory. As Mars points out, this project has as much to do with scientific research as art.

"The God Particle is very, very mad scientist, kind of science-fiction based," Mars says. "We're very proud to come on stage and display all of our awesome, dark-sounding gizmos and lights. It's like avant-garde, mysterious space pop. Noise-based pop, with a dream feel to it."

Mars and Carr met through work. "He's a friend and we both work at the School of Rock," the frontman says. "He came down to my basement one day and we found that the slide guitar works really well with what I do. That's kind of how the Particle came to be."

On stage, the pairing works extremely well. With the two standing side-by-side, they look as much like a DJ duo, like Orbital, as like a band. Mars is keen to get as much input as possible from Carr, though he admits that the project is basically his. "I don't want to sound like a megalomaniac, but I write a lot," he says. "We work from each other, but this to me is my synth-folk project because I'm writing lyrics, writing songs. That's a big difference between this and Marco Polio. This project is me creating the character, writing the lyrics to the songs and coming up with the concept. Stefan is my very good friend, and he's a very big part of the band. He helped make up for my lack of musical knowledge, I guess. He's more musical than I am, and I'm more creative and experimental, so it merges well."

For his part, Carr wasn't aware of Marco Polio & the New Vaccines until shortly before it stopped for its rest, and he describes his partner's old project as, "Simple, dance-y, noisy fun." He does know that he's a very different sort of collaborator for Mars than Puwalski.

"I try to do whatever Michael's not doing, I guess," Carr says, "trying to keep things big and full. I like the juxtaposition of the lap steel and guitar with all of Michael's synthesizers. It keeps things organic."

Something that Mars has to deal with during every show is the knowledge that everybody is looking at him now. He has no flamboyant performer to entertain the masses while he plays. "That's the sort of thing I deal with every time I play," Mars says. "In the Polio days, I sat back, wrote the music and let him express himself on stage. He went in with his energy and that was a big vibe for me. With this thing, I have to create my own way, my own ideas and universes. This is my first shot, as far as being a performer, to express myself more personally. We're not quite as energetic as the Polio, but we're more in tune with music, creating melodies and sounds, and focusing on myself more as a songwriter. Before, I would work from Steve a lot. This project is all about me."

With great power comes great responsibility, and Mars seems to embrace the performer role a little more with each passing show. The evolution in itself is entertaining to behold.

"I am a quiet person," Mars says. "I keep to myself, and I'm even described as sort of gloomy sometimes. In Marco Polio, I didn't really have much to say. Steve spoke for me in many ways, and I spoke for him musically. It's definitely a different experience when you come to see my band, though it's still evolving, developing and growing. As a person, I'm trying to throw myself out there, to be a bit more abrasive with the crowds and people in general. It's a very personal thing."

The God Particle has yet to record, though the band has played an impressive 45 shows in two-and-a-half months. The show this weekend will be one of the last this year, before the pair slows down and looks to get into the studio.

No matter what though, this is a project that will continue to evolve. While there are new toys out there to be invented or discovered, the God Particle can grow.

"Recently, I bought a theremin at a little music shop for $30, and I've actually dedicated most of my time lately not to playing keyboards and guitar but learning to play the theremin," Mars says, referring to the otherworldly sounding electronic instrument heard on the Beach Boys' "Good Vibrations" and a zillion low-budget sci-fi flicks. "It's not the best, but it's still playable. There's a lot that goes to it — hand motions and gestures, frequencies and modulations. It all mixes together and anyone could make noise and learn how to play one. We're also getting into making our own instruments. Stefan took a toy gun and made it into an oscillator. We're really getting into having our own instruments."

Like Marco Polio, the God Particle will play just about anywhere. Mars insists that the desire to play off the beaten path is vital. "We play any show that we can, whether it be a friend's house, out in front of our favorite store, or even street performing," he says. "With this band, we've played outside of Noir Leather already, we've street performed many times, and it's what helped us become this band. It's no-holds-barred. I've played many different places. Some shady places too. We've had some fun shows like that. That's just a part of being a musician, I guess. Getting yourself out there."

The God Particle is certainly doing that. In closing, though, we had to ask if Marco Polio & the New Vaccines is finished forever?

"Me and Steve still live together actually," Mars says. "I wouldn't say it's totally dead. He's got his band Pupils, and we're both doing our own things right now. I still have all the music and equipment, and I think when the time is right we'll come back. I guess the best way I could describe it is that Marco Polio & the New Vaccines is taking a nap right now. I don't believe it's over, personally."

Send comments to him at [email protected]