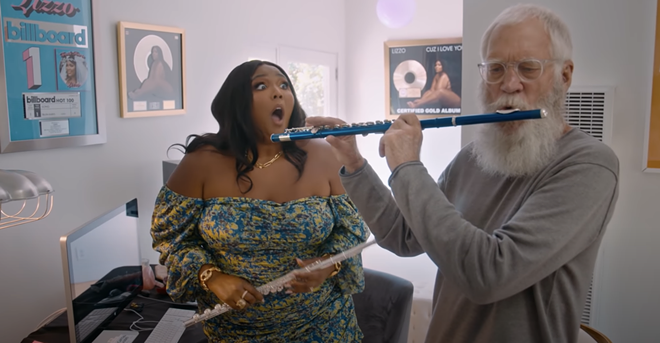 Six years after making her network television debut on Late Night with David Letterman as a virtually unknown hip-hop artist, Lizzo has found herself, once again, sharing screentime with the talk show legend — this time during a global pandemic with three Grammy awards under her belt.

For the third season of Letterman's Netflix series My Next Guest Needs No Introduction, which premiered Wednesday with guests Dave Chapelle and Kim Kardashian West, Letterman, 73, also pays a visit to Lizzo's home studio in Los Angeles. There, they discuss everything from her Detroit roots, fat-shaming, her father's death, her crystal collection, life-changing experiences in Minneapolis, the mysticism of Prince, and psilocybin mushrooms.

When asked why her family left her native home of Detroit for Houston, Lizzo laughs nervously.

“For a better life,” she said. “To get out of Detroit. I love Detroit so much. My family still lives there. But you gotta leave when you say you're gonna leave. Because Detroit is one of those places that can keep you for a long time.”


The pair got a bit hands-on, too when Lizzo attempted to record a hip-hop track with Letterman, hailing him as "Day-Z," and again when she introduced him to her flute collection. Eager to get his mouth on one as a beginner, Lizzo let him give her aptly named flute, Blue Ivy, a whirl. To Lizzo's surprise, he doesn't totally suck.

“No one can really do this!” Lizzo said.

At one point, when discussing Lizzo's success in college-grade master classes while on her path to becoming a symphonic flutist (which was derailed when she dropped out follower her father's death), Letterman drops this hilarious old white guy nugget: “Just to make sure we have this on the record, you were smoking the hoes.”

The episode veers toward discussing Lizzo's body image, activism, and how the Black Lives Matter movement is more than a “hashtag” or a moment — it's a chance for change.

“I can't help but be optimistic and hopeful,” she said.

My Next Guest Needs No Introduction with David Letterman is currently on Netflix.