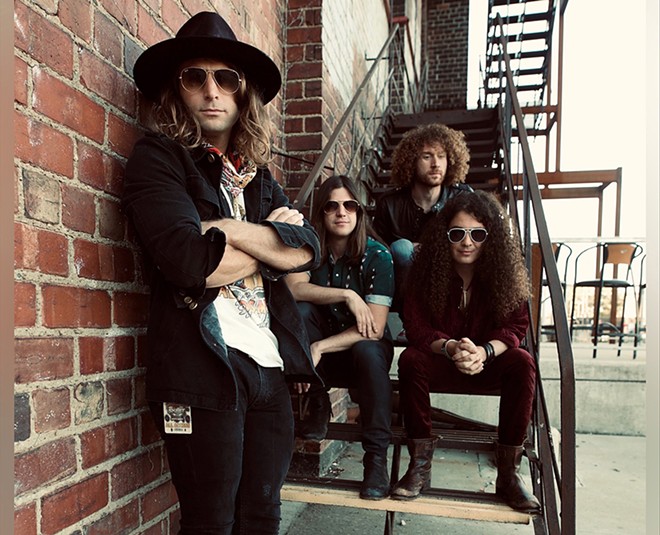 For Dirty Honey, the COVID pandemic came at a particularly inconvenient point. The group, in 2019, released a self-titled EP that included a history-making single, “When I’m Gone.”

With that song, Dirty Honey became the first-ever unsigned, independent band to have a Billboard Mainstream Rock Songs No. 1 single. The band was heading into a busy 2020 expecting to stay on the road building on the momentum of that hit song while also hitting the studio to record their debut full-length album.

The pandemic stopped those plans in their tracks.

“Touring is obviously our bread and butter, especially being a relatively unknown artist,” Dirty Honey singer Marc LaBelle observes in a phone interview. “You want to get out there and make the effort to make new fans. So when COVID happened, it was obviously deflating for everybody. But we knew we’d get back.”

The pandemic also changed Dirty Honey’s plans for recording the full-length debut album – in both good and less-good ways. Initially, the band planned to record the album in Australia during a short break between tours, but the pandemic meant the trip down under couldn’t happen. Delaying recording for a few months, though, gave the group more time to refine existing songs and lyrics and write a few new tunes. LaBelle feels the self-titled album is better as a result.

“That definitely was the one shining light out of COVID, that we got to make the record and take the time to make it as good as it could be,” LaBelle says.

Of course, the pandemic also meant LaBelle and his bandmates, guitarist John Notto, bassist Justin Smolian and drummer Corey Coverstone, couldn’t get together in a studio with producer Nick DiDia. Instead, they set up shop at L.A.’s Henson Studios and had to work with DiDia over zoom video calls.

“It was a challenge. None of us wanted to do it like with our producer, obviously, being in Australia and coming in over Zoom to the studio,” LaBelle says. “But the way we had it set up was really flawless. The fluidity of the workflow really surprised all of us. We were really happy with it. But I would never want to do it that way again. I’m looking forward to getting into a great studio with a great producer and seeing what that is like. We really haven’t done it that way before. The first EP was done in more of a home studio setup than anything else

“We’re all really looking forward to having everybody (recording) in a room together,” he adds. “We had a great engineer with us (for the self-titled full-length album), but there’s something extra that’s just missing when you do it that way.”

And it seems that Dirty Honey re-emerged from the pandemic in good shape. LaBelle noted that Dirty Honey’s first headlining show following the break was sold out, while the full-length album debuted at No. 2 upon its release in April 2020. The singles “The Wire” and “Another Last Time” each cracked the top 20 on Billboard magazine’s Mainstream Rock chart.

Now Dirty Honey is finishing 2022 with a run of headlining shows, having earlier in the year co-headlined the Young Guns tour with Mammoth WVH (the band fronted by Wolfgang Van Halen, son of the late guitar great Eddie Van Halen). The tour was a signal that the kind of meat-and-potatoes guitar rock that bands like the Black Crowes, Aerosmith, Led Zeppelin, and many others made a mainstay of the music scene from the 1970s through the early 2000s is making a comeback.

“It really feels like now it’s happening, and I’m feeling good about the future and the state of rock and roll, actually, for once,” LaBelle says.

Dirty Honey has yet to start work on a second album, but the band might entertain debuting new material on the tour.

“Like from even before anybody really cared about what we were doing that was always one of my favorite things to do, like if we were playing like a cover gig in L.A., we’d start slipping in some originals to see how they stand up against ‘Black Dog’ or something, or another classic song,” LaBelle says. “There’s usually a good sense of excitement when you’re about to play something people have never heard before. It usually goes over pretty cool, and I love, if you’re well rehearsed and you can really focus in on peoples’ faces and see if they genuinely appreciate what they’re hearing for the first time, it’s always an interesting dynamic.”

“It kind of got to a point for me really where I was like there is no other option (than music). There’s nothing else I want to do. This is all I have and this is the only thing I’m good at.”

The fall tour is the latest step on a journey that began for LaBelle when he moved to Los Angeles in 2012 thinking it would be the ideal place to find like-minded musicians to join him in a band. He had a college background in film production and he found jobs in that field working on Sons of Anarchy and The New Girl, among other shows. But starting a band was always his goal.

“I had a decent little thing going, but ultimately, I very quickly learned I wasn’t chasing my dream, and every moment I spent on set, it just felt like I was wasting my life doing something I ultimately didn’t want to do,” LaBelle says.

“It kind of got to a point for me really where I was like there is no other option (than music),” he adds. “There’s nothing else I want to do. This is all I have and this is the only thing I’m good at. So my decision making was really made for me.”

The challenge was the Los Angeles music scene at the time was packed with hipster acts playing keyboard-oriented music, and LaBelle wasn’t finding musicians who wanted to start a guitar rock band and would be committed to doing the touring and other work needed to make a group a success.

LaBelle’s lengthy search finally began to bear fruit in 2017 when he met Notto, who co-wrote “When I’m Gone” with him. Smolian joined next, followed by Coverstone. Dirty Honey was up and running, starting out playing gigs around Los Angeles, Santa Monica, and Ventura, while avoiding what LaBelle saw as a dead scene around the fabled Sunset Strip.

The group’s sound came together quickly, and when “When I’m Gone” struck gold on the mainstream rock chart, Dirty Honey’s career really accelerated.

The full-length album delivers on the promise of the EP. Songs like “The Wire,” “No Warning,” and “California Dreamin’” come with sharp guitar hooks, appealing vocal melodies, and the kind of heft and steady energy bands like the Black Crowes, Aerosmith, and Rival Sons built into their music. LaBelle says the members of Dirty Honey have found common ground musically even though they each have different approaches to music and strong personalities.

“I think that’s an ingredient for any quote-unquote classic band, and by classic, I mean unique,” he says. “You couldn’t get four more unique personalities than the ones in Van Halen. And that goes for AC/DC and Led Zeppelin and Aerosmith and the Rolling Stones. There’s a reason I know everybody’s name in all of those bands. They are unique individuals that really are essential to the sound of each of those bands. And that’s when magic happens. Any band that we love had that ingredient.”