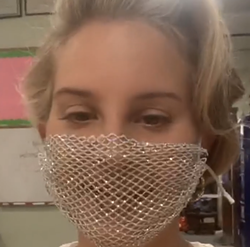 Screengrab/Instagram
Lana Del Rey sporting a mesh face mask at a book event in October that she now claims was lined with plastic.
Lana F****** Del Rey — glamorous pioneer of sensual “sadcore,” dater of a c*p, third-wave white feminist, and, as of late, a problematic manic pixie dream dame — is not meshing with recent accusations that the “Born to Die” singer should be canceled.

On Sunday, The Michigan Daily published an article titled “Lana Del Rey wore a mesh mask. What now?” in which the author analyzed cancel culture and whether the singer's past transgressions — namely wearing a sparkling mesh mask during a book signing event in support of her debut collection of poetry, Violet Bent Backwards Over the Grass last month — is enough to evict the 35-year-old singer from our playlists.

“Now, Del Rey stands before the chopping block, and her legions of fans watch in fear and anticipation to see if her 'head will roll' next,” Madeleine Virginia Gannon writes. “Does a mesh mask disqualify her from our love? It seems such an insignificant misstep for an idol who the world has cherished for so long. But the pandemic has killed hundreds of thousands of people — a number so large, it seems unfathomable.”

The article was shared on The Michigan Daily's Twitter on Monday and, lo and behold, Lady Lana weighed in to praise the article and to defend #MeshMaskGate.

“Great article. The mask had plastic on the inside. They’re commonly sewn in by stylists these days,” the singer commented on Twitter. “I don’t generally respond to articles because I don’t care. But there ya go. Same goes for everyone’s masks in my video. I’m lucky enough to have a team of people who can do that.”


Great article. The mask had plastic on the inside. They’re commonly sewn in by stylists these days. I don’t generally respond to articles because I don’t care. But there ya go. Same goes for everyone’s masks in my video. I’m lucky enough to have a team of people who can do that


The video in question raised concerns that Del Rey was not taking the pandemic seriously and used the event to make a fashion statement, and, potentially, a political one. If true — that the mask is indeed lined with plastic — its construction is wildly impressive, as the plastic does not show through the mesh, nor hold in the moisture that might cause fogging, like a face shield.

“I love you sis but please wear a real mask, it gives a bad message :( ,” one Instagram user wrote.

“Girl, that's not a mask. You make good music but poor decisions.”

Another fan said it best: “Honestly what the fuck are you doing?”


Gannon poses many questions as to whether the singer should succumb to the fate assigned to the many celebs who have made seemingly innocent, albeit tone-deaf, missteps online and IRL, suggesting the public shaming of Lady Lana is nothing but a “cowardly retreat” in which Del Rey is “ostracized in daylight while the world continues to indulge in her music as a guilty pleasure.” But Gannon also addresses the many internet “whispers” that suggest that the mesh mask was the final straw for those calling for Del Rey's exile.

In May, Del Rey posted a lengthy note on Instagram in which she addressed those who criticize her for writing music and poetry that glamorizes abusive relationships. In the note, she directly called out several successful performers — all of whom happened to be women of color — for being able to score No. 1 songs about “being sexy, wearing no clothes, fucking, cheating, etc.” Meanwhile, Del Rey says she has often been “crucified” for writing about “challenging relationships.”

“I'm just fed up with female writers and alt singers saying that I glamorize abuse when in reality I'm just a glamorous person just singing about the realities of what we are all now seeing are all very prevalent emotionally-abusive relationships all over the world,” she wrote. “I'm not not a feminist — but there has to be a place in feminism for women who look and act like me.”

Other whispers include fan-fed suspicion that Del Rey voted for President Donald Trump. In one recent Twitter exchange, the singer weighed in to tell a fan who suspected she voted for Trump to go “fuxk” herself. It could be that Del Rey's recent relationship with a reality television cop fueled suspicions that the singer supports conservative views, however, the two amicably ended their relationship in March citing scheduling conflicts.

The breakup preceded this summer's ongoing Black Lives Matter marches to protest racial injustice at the hands of cops. In June, Del Rey attended a BLM march with friends sporting a non-mesh mask, according to a caption-less Instagram post. But, much like her defense of the mesh mask and her lyrical content, not everyone is buying into her #aesthetic sincerity.

“Look- another performance from Lana Del Rey! Accept she didn’t sing this time... damn. Just a photo opp. Grabbed a couple friends, put on some ™️sponsored gear, and went down to the movement for just long enough to get those shots in for her brand,” a commenter wrote. “Nice one @lanadelrey but I saw the posts where you threw Women of Color (and particularly Black Women) under the bus - and you don’t seem to really care about anyone but white people on any other given day- so I’ll pass on watching any more of your performances from now on.”