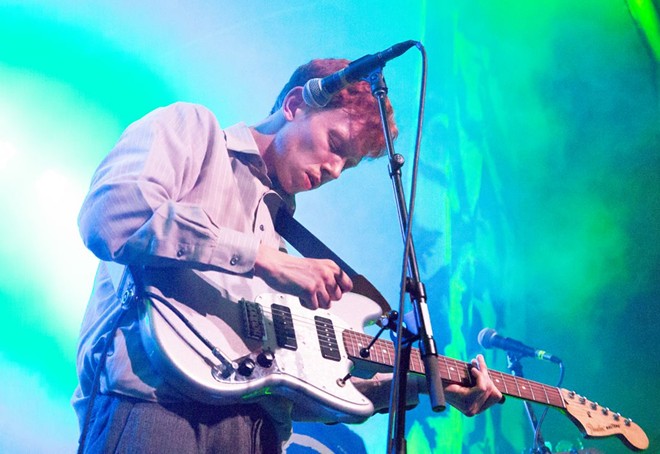 The moody London band, the project of 23-year-old Archy Marshall, played to a sold-out crowd at St. Andrew's Hall on Saturday, April 28.

It was clear from the beginning that Marshall was in charge, commanding his six-piece band and the crowd from the front of the stage. The crowd was packed into the venue like sardines but still electric, screaming and dancing from the moment King Krule took the stage.

"This is our first time in Detroit, let's have some fun," Marshall told the crowd in his thick accent before launching into a dark and surfy song.

King Krule dabbles in dark and stormy seventh chords, informed by jazz but not limited by it. Once the band began to play the room transformed into a darker and seedier environment. A thick layer of reverb on the vocals and the instruments — plus the occasional vape cloud — flooded the air. The closer you were to the stage the more it felt like being under water.

Very few would characterize King Krule as a rock band but from their opening song to their encore it was clear that St. Andrew's, recently voted Best Rock Club, was hosting a rock show. The band's songs were louder, faster and heavier live. The jazz chords, the crooning, and the wailing saxophone that King Krule is known for were all there but live they were louder and edgier — imagine their records The Ooz and 6 Feet Beneath the Moon set at twice the volume.

Marshall sang with more grit than his studio recording on songs like "Dum Surfer" and "Rock Bottom," often screaming into the microphone. Lyrics were barked as much as they were sung and the crowd fed off of Marshall's energy, moshing during the faster songs. It felt a lot like a punk show.

More impressive was King Krule's ability to slow things down and dig into deep grooves. The influence of dark wave, dub reggae, and hip-hop could all be heard in these more tender moments but the audience never stopped moving. Even during the darkest musical moments in the set an underlying groove was always there.

At the end of the set the audience cheered loudly with a familiar and very loud "ONE-MORE-SONG!" chant. The stage stayed empty for nearly five minutes — was he really not coming back out with a sold-out crowd demanding an encore?

Finally, Marshall obliged, returning to the stage to another round of cheers to play "Easy Easy," one of his best-known songs.

As the song finished and the night wrapped up, it was clear that Detroit had gotten an honest glimpse of a true young talent on the rise.

Anthony Spak is an editorial intern with the Metro Times and a recent graduate of Oakland University’s journalism program. Follow him on Twitter.