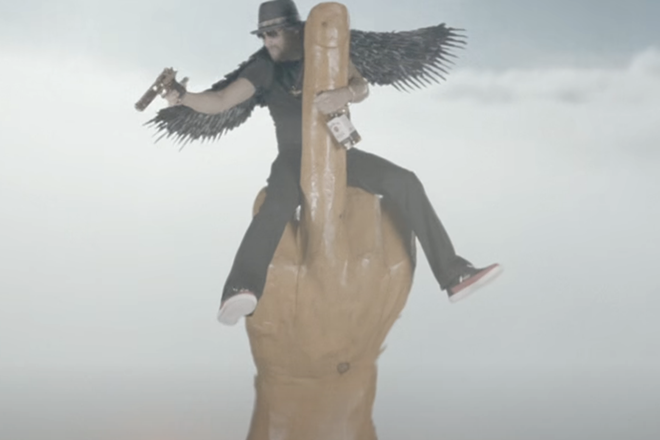 Like the bullshit cowboy he has claimed to be since 1998, Kid Rock beats many a dead horse in his latest "song" and companion video in which the aging bigot recycles tired imagery, Fox News verbiage, and sports a pair of eagle's wings whilst straddling a phallic middle finger "Kid Rock-it" on a trip to Mars.

Kid Rock, aka Robert Richie, aka the Romeo, Michigan-bred, deep-fried Nashville transplant/human cigarette whose past is splattered with sexism, homophobia, transphobia, right-wing apologist rhetoric, the Confederate Flag, a fake political bid, and a whole lot of Trump love, teased new music Thursday with cover art of the statue of liberty wearing a face mask and delivered a steaming hot pile of ... well, he delivered on Friday.

The single, "Don't Tell Me How To Live," taps Canadian rock band Monster Truck (and their 2015 track of the same name) and, if we're being honest, looks and sounds like a joke song, like something we might see on a Saturday Night Live digital short featuring Pete Davidson. While Kid Rock, 50, is selective on when he chooses to take himself seriously (which directly correlates with his level of public intoxication), the single has everything we have come to expect from a Kid Rock song which, at this point, is almost sad.

"Fuck all you hoes," Rock shouts at the top of the track. "Detroit 'til I die motherfucker!"

Detroit had once been kind to the rap-rocker, but after Kid Rock went on a vile, misogynistic drunken rant against Oprah at his Nashville restaurant, the city he touts as his home (it's not) turned against him. Little Caesars Arena operators severed ties with the "Bawitdaba" singer in 2019 and, this year, announced a replacement for the now-closed Kid Rock's Made In Detroit bar and restaurant located within the arena. Rock, of course, opened LCA with a six night-run where he teased a run for U.S. Senate. The opening was met with protests and he never ran for Senator. But boy, did he sell a lot of fake campaign merch.

Anyway, as with any of Rock's releases since Trump took office (and after he lost a second term in 2020), it's clear that he's continuing to double down on his war against the media (except for Fox News) and social media (except when using it to promote his work) and millennial snowflakes is more important than making music worth listening to.

"A nation of pussies is our next generation/ and these minions and their agendas/ every opinion has a millennial offended," he rants. "But this Amendment one it rings true/ And if you don't dissent, bitch, then see number two," he threatens, while holding a shotgun against an American flag.

The video finds Rock telling us to kiss his ass and suck his dick sideways while wearing a white fur coat, a nod to his Devil Without a Cause days along with basketball shorts, tube socks, chains, and a fedora looking every bit like a Jan. 6 insurrectionist crossed with someone who tries to sell you counterfeit DVDs out of the trunk of his car in a 7-11 parking lot.

Perhaps the most bizarre visual is the part in the video when Rock decides to join the space race, a reference to fellow rich idiots Jeff Bezos and Elon Musk, by straddling a middle finger "Kid Rock-it." As the rocket shoots into the air, Rock shoots a gold gun while gripping a bottle of booze, his eagle wings flapping behind him. We assume that someone like Rock, who, celebrated Pride month this year by calling his fans an antigay slur during an impromptu performance at a bar in Tennessee (and later, tweeted "If Kid Rock using the word f***** offends you, good chance you are one") must have a pretty unhealthy relationship with sexuality, which is why we are here to let him know that his Kid Rock-it looks like a dick.

The self-proclaimed "high-risk hillbilly" then goes on to compare himself to people Millie and Vannili, Bruce Springsteen, James Dean, and a "little less pretty" Brad Pitt, adding that he "slings more dick" than the Academy Award-winning actor.

While we sit here and laugh in disgust at Rock and his total disregard for hair care, his cult, er, fans are eating this up.

And, yes, there are a lot of comments praising the track and its message, many of which include the hashtag #Trump2024.

If you need a good laugh or a healthy puke or if you feel like reporting the video on your choice of social media channels, go for it, because ain't nobody going to tell you how to live.