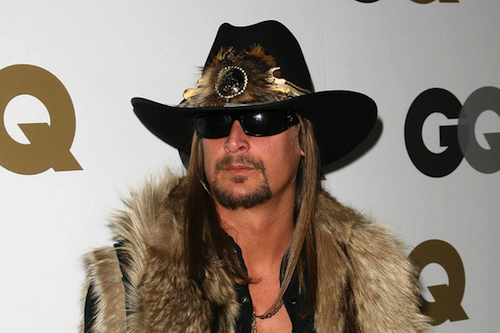 Of course, Ritchie has every right to stand in front of a crowd and burp up any stupid comment he likes. That’s his right as an American citizen. It’s a right we defend.

But it’s legitimate to call out Ritchie a little bit, particularly when you consider how Kid Rock got his start.

For instance, let's roll back the clock six years and read what onetime MT music editor Brian Smith had to say about Ritchie:

Here’s a rich white kid who stepped into inner-city Detroit, copped its music wholesale from its rappers — without proper credit — made DJ shtick (oh, the irony!) of it, and then later paraded around, hair-tossing and burping up song-after-gratuitous-song of self-congratulatory horseshit.


Or take Smith’s reporting from a dozen years ago, when he reported that Detroit rapper Champtown, aka Brian Harmon, said, “We gave Kid Rock his ghetto pass.” Smith called Kid Rock a cultural sponge “who swooped in on Detroit ghettos, appropriated black music and its aesthetic, and raced straight past Go to Park Place.”

To return to Smith’s article from 2010, he wrote: “The rich kid from rural Michigan got all trailer on us and then we saw him on stage in front of a Confederate flag, like he’s all down with Skynyrd now. After Rock ditched the lame rock-rap and slipped into white trashin’, we knew it was an easy route to big bank deposits.”

That’s the most recent iteration of Kid Rock, who’ll stand in front of the stars and bars while declaring his love for black folks and accepting an award from the NAACP. Yes, it’s enough to give you whiplash, but we suppose no more than cozying up to War on Drugs Republican politicians when your body of work includes such immortal lines as “Playin’ shows, fuckin’ hos, got the dope in my veins and up my nose.”

Through it all, the strangely charmed life of Bob Ritchie has gone on. But to have gained your street credibility from inner-city black rappers, to have appropriated their style for profit, and to have declared your love for black people, and then to turn around and single out a sincere African-American for a solemn act of silent protest?

It reminds us of a defunct local music venue. You know the one: It hoped to attract plenty of white kids with EDM, a form of music that, in its actual heyday, was black and political. That venue ran into some serious trouble after retweeting a comment blaming President Obama, liberals, and Black Lives Matter for a Dallas shooting that killed several police. The club claimed it had been hacked, but quietly closed shortly thereafter, apparently a victim of the furor.

Why does Ritchie get to go on expressing contempt for the people who gave him his start? Probably because the coke-snorting suburban hillbillies who lap up his redneck schtick and his Robitussin-flavored whiskey couldn’t care less about black people. He’s crossed over, and, thanks to his canny donations to various charities, he knows it’s now safe for him to act out the low-rent Ted Nugent fantasies he’s probably always harbored.

Hey, nobody said celebrities had to be decent people, or couldn’t be hypocrites.

But as a friend of ours lamented on social networking in connection with the Fenway affront: “Oh, Bobby, Bobby, Bobby: You really don't need to jump on every lowest common denominator bandwagon that drunkenly lurches past you.”