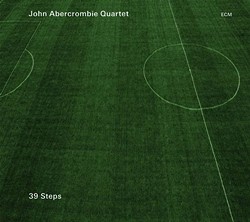 There is no obvious theme to the exquisite new album by jazz guitarist John Abercrombie, but there are four references to film director Alfred Hitchcock — including the title itself, 39 Steps, and the corresponding title track. Three other compositions, “Spellbound,” “Vertigo” and “Shadow of a Doubt” are also Hitchcock films titles. Abercrombie has been with ECM Records since his debut in 1974 with the classic, groundbreaking albumTimeless. With this history, his music has helped define the ethereal and explorative sound of the European label ECM (Edition of Contemporary Music), founded in Munich in 1969. Music-wise, the album’s nature is intimate, cerebral and even-tempered. The band members are pleasantly in sync with one another, creating a soft, if not somewhat muted, collective sound. Pianist Marc Copland and Abercrombie have played together, on and off, for more than 40 years, but this is Abercrombie’s first ECM album since the ’80s on which he plays with a pianist. While it can prove challenging having two chord instruments in a small combo, this group makes it work; the quartet is rounded out by New York-based double bassist Drew Gress and veteran drummer Joey Baron. Of the 10 tracks, six are John Abercrombie originals, two are by Marc Copland, one is a group effort and then there’s a cover of “Melancholy Baby.” Album opener “Vertigo” features pianist Marc Copland playing broken chordal figures and arpeggios that seem to be cascading downward. Abercrombie’s inventive use of certain modes and chords is also very atmospheric. On Copland’s “Spellbound,” Abercrombie’s guitar is spellbinding and silky; he soulfully plays the main theme using octaves and channels a hint of the great Wes Montgomery. The album’s lush textures and muted colors are a perfect soundtrack for fall and winter listening.