Plus: New music from Detroit rapper Chasey The Illest 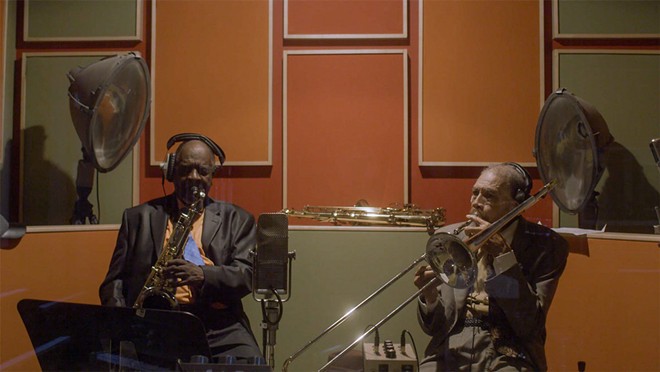 Long live jazz: The Jazz Is Dead series highlights Tribe Records on its latest installment. Ali Shaheed Muhammad (A Tribe Called Quest) and Adrian Younge started the series to bring jazz legends to the forefront and highlight their deep contributions to the genre and popular music. Volume 16 of the series features new recordings from Phil Ranelin and Wendell Harrison, founders of the immeasurably influential record label and magazine Tribe. As of this writing, three tracks have been released for streaming, featuring Ranelin on trombone with Harrison on tenor sax and bass clarinet. Younge and Shaheed Muhammad contribute keys/organ and bass guitar, respectively. Tribe has finally gotten the recognition it deserves recently, with reissues and box sets hitting record stores over the past few years. However, the label has always represented even more than virtuosic jazz performances, serving as an early blueprint for community-driven arts organization, promotion and distribution. This release is the perfect passing of the inter-generational torch, while highlighting the undeniable thumbprint Detroit has left on jazz over the last century. Vinyl, digital, and other merch is available for pre-order via Jazz Is Dead’s Bandcamp page, releasing on Jan. 27. —Joe Zimmer

Dee Jay Dancing: This monthly residency at Spot Lite sees selectors Scott Zacharias and Ryan Spencer reach into their infinite well of dance music knowledge and pull out forgotten gems and rare grooves to move your body to. During a month where most club-goers are feeling the fatigue from holiday and year-end parties, plus the stress of starting a new year, a set from Scott and Ryan is the perfect way to start anew. Both artists have individually become regarded for their exploratory, genre-agnostic approach to DJing, often riding the fine line between minimal, chill-out tracks and bass-driven dance floor heaters. Dee Jay Dancing happens every third Wednesday, and I can’t envision a better duo to coax me out of the house on a weeknight. Cover is free, and I recommend following both Ryan and Scott on Instagram (@ryan___spencer and @scott_zacharias, respectively) for any updates, plus future shows; these are some folks you’ll want to keep up with. —Joe Zimmer

DSO x the Queen of Soul: On Wednesday, Jan. 4, the Detroit Symphony Orchestra debuted its live accompaniment of the film Respect, which tells the story of Aretha Franklin and her rise from local church choir singer to one of the most powerful musical talents that the world has ever known. Though the film was released in 2021, the story is just as moving as ever (trigger warning: sexual violence, racism, drug use, etc.), and it takes the viewer through the highs and lows of Franklin’s life and career, examining the relationships with family, romantic partners, and collaborators that shaped her personally and professionally. The Detroit Symphony Orchestra, led by Anthony Parnther, traversed the music of the Queen of Soul’s life with poise and precision, going so far as to represent different iterations of a song as it was being crafted during a studio session scene. It was a remarkable thing to witness, and in May the DSO will be joined by vocalists Tamika Lawrence, Coco Smith, and Blaine Krauss for Respect: A Tribute to Aretha Franklin, which will surely be a sight to see (and hear) as well. —Broccoli

Still ill: Detroit rapper Chasey the Illest has been quietly at work over the past few years, emerging only to drop small snippets and one-off singles that have built-up anticipation for his long awaited full-length projects. A major highlight of this creative moment for the rapper has been his “Untitled” series, which finds him collaborating with Super Official Studios to create unique, captivating visual stories to accompany his wordplay, giving deeper meaning to the words that he writes as he also showcases his ability as a performer and on-screen talent. “Untitled 006” is the latest drop, and it certainly does not disappoint. The video features a bootleg beat originally produced by Vano 3000 that samples Samuel T. Herring and BADBADNOTGOOD, and the visuals are set within a disheveled but once beautiful abandoned building, which is juxtaposed by Chasey the Illest in crisp outfits as he seemingly plays a game of chess against himself. As always, the real star of the show is Chasey’s impressive lyricism and dynamic wordplay, with a punch and delivery that sets him apart in both style and caliber from many of his contemporaries in Detroit hip-hop. Be on the lookout for more from this promising young artist in the city, and if you see him out, tell him to drop the next album already! —Broccoli