‘I’m a musician above everything else’ A phone interview is scheduled with Rodney Whitaker, the native Detroiter hailed as one of the greatest jazz double bass artists on the planet, for a Saturday morning.

Don’t want to call too early. Musician’s hours, you know.

“I’ve been up since eight!” Whitaker counters from his mid-Michigan home. “I was in Florida for a couple of days teaching master classes, so I got up this morning, did some writing for the method book I’m working on, then practiced for a couple of hours.”

It’s important to maximize one’s time when you’re a performing, touring, and recording artist who’s played with everybody from Wynton Marsalis to Dizzy Gillespie and who also happens to be the Distinguished Professor of Jazz Bass and Director of Jazz Studies at the Michigan State University College of Music.

“It’s a challenge,” he admits. “I have a regular weekly schedule and only a certain amount of weeks per semester I can go and do other work. But it would be the same if I was a doctor, lawyer, or any other profession. I’m a musician above everything else, and you have to put in the time and hard work in anything you do.”

Whitaker’s road work takes him home this month for a two-night, three-show gig at Detroit’s fabled jazz club Cliff Bell’s next Wednesday and Thursday nights in support of his new release Oasis: The Music of Gregg Hill, coming out this month on the Origin Records label.

Oasis is Whitaker’s third album collaboration with Hill, the Lansing-based composer who has published 145 original jazz compositions. “We recorded the first one (Common Ground) pre-pandemic, and the second one (Outrospection) during the pandemic,” Whitaker says.

“Gregg is a great friend of mine, lives here in the Lansing community, and he’s a very philanthropic person who supports a lot of artists here. But he’s also a beautiful human being, just a kind, gentle person, and we talk about music all the time. He had so many tunes he wanted to get out, and as he began to get his music recorded I said, ‘Hey, I want to be a part of some of these collaborations!’”

“They’re a great co-op label,” he says of Origin. “You own your product and they do all the distribution and promotion. I had done projects with all the artists who record for their label, and when I approached them with my Ellington record (2019’s All Too Soon: The Music of Duke Ellington) they were pretty excited. All the records I’ve done for them have really done well in terms of sales, publicity, and radio play. And you need to own your product in this modern day. That’s the way it should be. Content is everything.”

Whitaker says he tries to perform at Cliff Bell’s at least twice a year in recent years since one of his former students, Noah Jackson, was named curator and creative director there. “I just want to support what he’s doing,” he says. 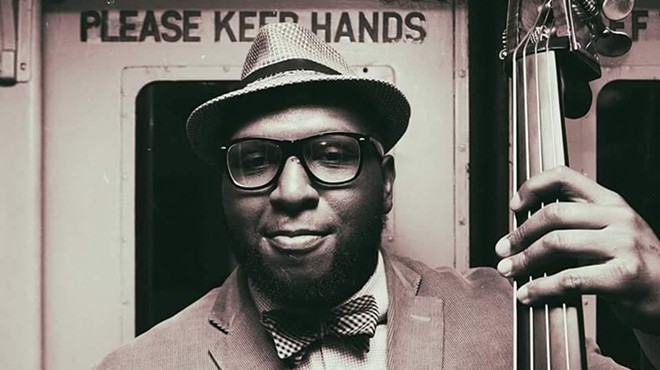 “But I always tell people, there’s no audience like a Detroit audience,” Whitaker says, a note of pride in his voice. “Those crowds know whether you can play or not. You can’t come into Detroit with no BS. They don’t tolerate it. Detroit has a BS filter. Like Stanley Clarke used to say about New Yorkers, ‘They can smell the sulfur before you strike the match.’”

For this record release engagement Whitaker will be accompanied at Cliff Bell’s, as he was on Oasis, by his daughter, Rockelle Fortin, on vocals. “Rockelle (a musical variation on “Raquel,” a favorite movie actress of his youth) and I have been playing together since she was 18,” Whitaker says, “and she will tell you she’s in her late 20s now.”

Fortin’s distinctive vocal gifts are particularly evident on the haunting, reflective Oasis track “Interlude.” “You know, just like you’ve got to learn parenting, you’ve got to learn how to work with your family,” Whitaker reflects. “Because sometimes they take what you say very personally. So you’ve got to respect them like you respect your other musicians. I enjoy working with her. She’s got a great voice and comes prepared all the time. And she wrote the lyrics to all the tunes. She’s become quite the lyricist.”

And he’s become quite the educator, helping transform MSU’s jazz curriculum into one of the preeminent programs in the nation under his leadership. “We won a national competition last year,” he says, “the alumni are doing well, and the program continues to grow. Probably 60% of our students are from out of state, as far away as California, Florida, and the East Coast. Michigan State has invested a lot in our program, and we’re probably ranking in the Top 10.”

Teaching jazz, as you might imagine, “is very difficult, because you have to think outside the box,” Whitaker believes. “You have to work on communication all the time. You can’t assume students know what you mean. When I teach I’ll go over material even if we talked about it last week. Nobody wants to admit they don’t know.”

To help present and future students remember, Whitaker is putting together his method book, a textbook that compiles everything he’s learned and taught over his career.

“For the last 20 years I’ve kept a course pack, which is a collection of all the things I’ve taught my students about the bass,” he explains. “What I’ve started working on is putting that all together in a book to be published by next summer. Ron Carter got a method book. Rufus Reid got a method book. So I’m just trying to follow their lead. I think that’s how you leave a legacy.

“One of my mentors always said to me, ‘You don’t have anything to complain about. You have people paying you money to do your hobby.’ So all is well.”