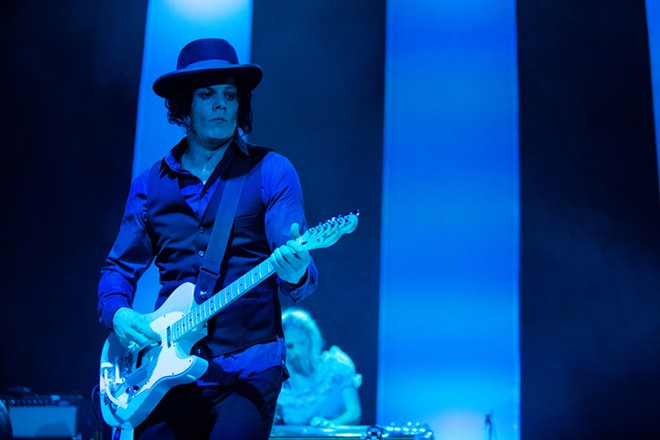 Rock star Jack White released a statement on Instagram over the weekend to clarify that a reference to heroin use in a recent interview was just a joke.

The whole mess started with an article published over the weekend in The Irish Times about Help Us Stranger, the first record from his band the Raconteurs in more than a decade. In the story, White said the record was delayed because his bandmate Brendan Benson quit drinking and White started using heroin:

“Well, when Brendan gave up alcohol, I started doing heroin, so that delayed things,” deadpans White. “It’s funny, I’m a big believer that things happen that are supposed to happen — not in any sort of religious or mystical way, but in a ‘human nature’ kind of way. Why didn’t we record an album five years ago? Well, it just wasn’t the right — it wasn’t like we were all in a room together staring at each other, saying ‘What the hell? Why aren’t we recording?’ So at the moment that it does happen, you think ‘This is amazing! It feels perfect.’ Yeah, it would have been nice to do this a few years ago, but I think it’s better that it’s happened now.”


Within hours, Spin published a blog post that reported straight that the record was delayed because White started using heroin — ignoring the word "deadpans" in the original Irish Times story.

This claim would have seemed odd to hardcore Jack White fans. In numerous interviews since his band the White Stripes broke out, White has spoken out against drug use, though he has used alcohol and cigarettes. (The topic is addressed on a White Stripes fan site.) More recently, White has even famously shunned smartphones due to their addictive qualities.

In the old days of journalism, a claim like White's would have probably warranted a phone call for clarification, or to be handled a bit more sensitively. A major rock star who has famously shunned drugs now succumbing to heroin? It seems that in the clickbait economy, though, the rules are blog first, ask questions later.

Also, this is the same guy who came right out of the gate deadpanning to music journalists that his bandmate and ex-wife was actually his sister. Clearly the media has learned nothing.

Anyway, White later clarified with a statement posted to his Instagram account on Sunday. "I've never done heroin or any other illegal drug in my life and anyone close to me could confirm this," he wrote. "If you'd actually read the article in full, you could see that I was joking." In a follow-up comment, he wrote, "Also, for a full understanding of the kind of guy I am and where I come from, please try my cold brew beverage — link in bio." The link goes to a video of White making "nature's cold brew" by mixing dirt and water — another deadpan joke. The Irish Times and Spin both edited their stories.

It's not the first time White has joked about drug use and the Raconteurs. In a message written as a conversation between White and Benson and posted on the band's MySpace page in 2007, White joked that the band's forthcoming record was "drug-fueled" — among many other falsehoods:

Brendan: “Jack, why don’t you want to tell people about the new album we’ve got cooking?”

Jack: “I’ll tell them when the time is right.”

Brendan: “What time is it right now?”

Jack: “OK, the time is right. The ‘teurs have a lot of new songs in the works people, the writing and structure of them has dissipated and reinvigorated and many times over since we came home from our last shows.”

Brendan: “We got into the studio as soon as we could, or as soon as LJ (bass player Jack Lawrence) would let us.”

Jack: “Yeah, matter of fact little Jack won’t let us do much without his blessing — and trying to get his blessing is like draining blood from a stone.”

Brendan: “Is that why the recording sessions were ‘drug fuelled’, Jack?”

Jack: “I was just kidding when I said that Brendan, don’t believe everything you read. Fact of business; don’t even believe all the things I tell you when it’s just you and me in the room. If little Jack‘s there though, then it’s all true.”

Brendan: “Well, if you consider acidophilus powder a drug, then yes the tank is full of fuel!”

Jack: “If I was to ever take a drug for pleasure, I would want that drug to be aspirin for all the headaches I get from second hand acidophilus powder and flax seed smoke.”


Still, maybe we shouldn't joke about heroin use.

The Raconteurs are set to perform back-to-back shows at Detroit's Masonic Temple on Friday, July 12, and Saturday, July 13.

also, for a full understanding of the kind of guy i am and where i come from, please try my cold brew beverage- link in bio.