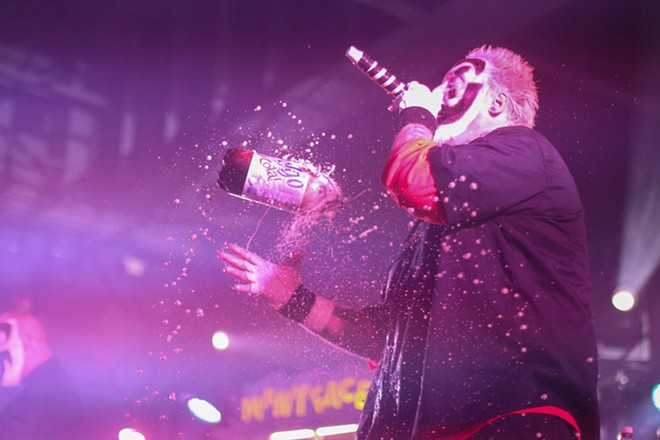 The thought of being sprayed in our Juggalo painted faces with Faygo from a bottle someone just put their mouth on just hits different during a pandemic. But that's not stopping Juggalo royalty Insane Clown Posse from throwing a Christmas party at Detroit's El Club on Wednesday, Dec. 23.

For Wednesday's Big Ballas Xmas Party, which is not a full-blown performance but rather a livestream with a small live audience, ICP had originally planned on giving tickets to 100 people who participated in an auction of ICP gear via the group's Psychopathic Vault. But now, the event has been scaled down to an audience of 50 fans.

The change in capacity comes after correspondence with El Club's management, who said they initially believed that the event rental was for a livestream only, not an in-person event.

Michigan allowed entertainment venues to reopen earlier this month, with a maximum capacity of 100 people (who must wear masks), but once El Club management spoke with ICP's team for clarity, the number of tickets was reduced to ensure the safety of El Club's patrons and staff. The Big Ballas Xmas party is a private event, open to only those 50 people who won the auctions. Anyone who is not a ticket-holder will be turned away at the door. (ICP has also since edited their original social media posts from offering “100 tickets” to “limited tickets.”)

Though management says El Club will likely not formally reopen until next summer as long as they are legally allowed to do so under state-wide orders, they're preparing for the Wednesday ICP event by having a door person check temperatures, provide hand sanitizer, and enforce masks. Management says should anyone remove their mask at any point aside from adjusting the face covering, they'll be removed from the building. In accordance with the state-wide order, which bans concessions and in-door dining, El Club will not sell any food or drinks.

Normally, capacity for the venue is 500 people.

The ICP Christmas party might be the duo's first in-person event (that we know of) since postponing this year's Gathering of the Juggalos, the annual Psychopathic Records-hosted event dubbed “the biggest family reunion on the planet.” This year's Gathering was slated to take place Aug. 5-8 in Garrettsville, Ohio, at the Nelson Ledges Quarry Park, where thousands of Juggalos, well, were expected to gather in face paint, sporting hatchetman apparel, joyfully submitting themselves to sticky Faygo soda showers. But ICP pulled the plug on the 2020 festivities in April after they issued a promise for a “stronger, bigger, and better than ever” Gathering in 2021.

“With tens of thousands of deaths due to the COVID-19 outbreak, we can't possibly in good conscience even consider trying to put on a gathering during these difficult times,” ICP's cancellation statement read. “The bottom line is simply that we refuse to risk even ONE Juggalo life by hosting a Gathering during these troubling times.”

ICP's Big Ballas Xmas party is part of their Hell Fresh Holidays Livestream series, which has included a Juggalo cook-off, 20 years of The Gathering podcast, and more. The series will conclude with what is being referred to as ICP's "Pointless Pizza Party" on Dec. 30. The cost for access to these streaming events is $65 a month, according to ICP's Patreon.

Ticket auctions are live as of noon Tuesday and continue until 10 p.m. via PyschopathicVault.com. The Big Ballas Xmas Party will also be live-streamed for subscribers through ICP's Patreon page.