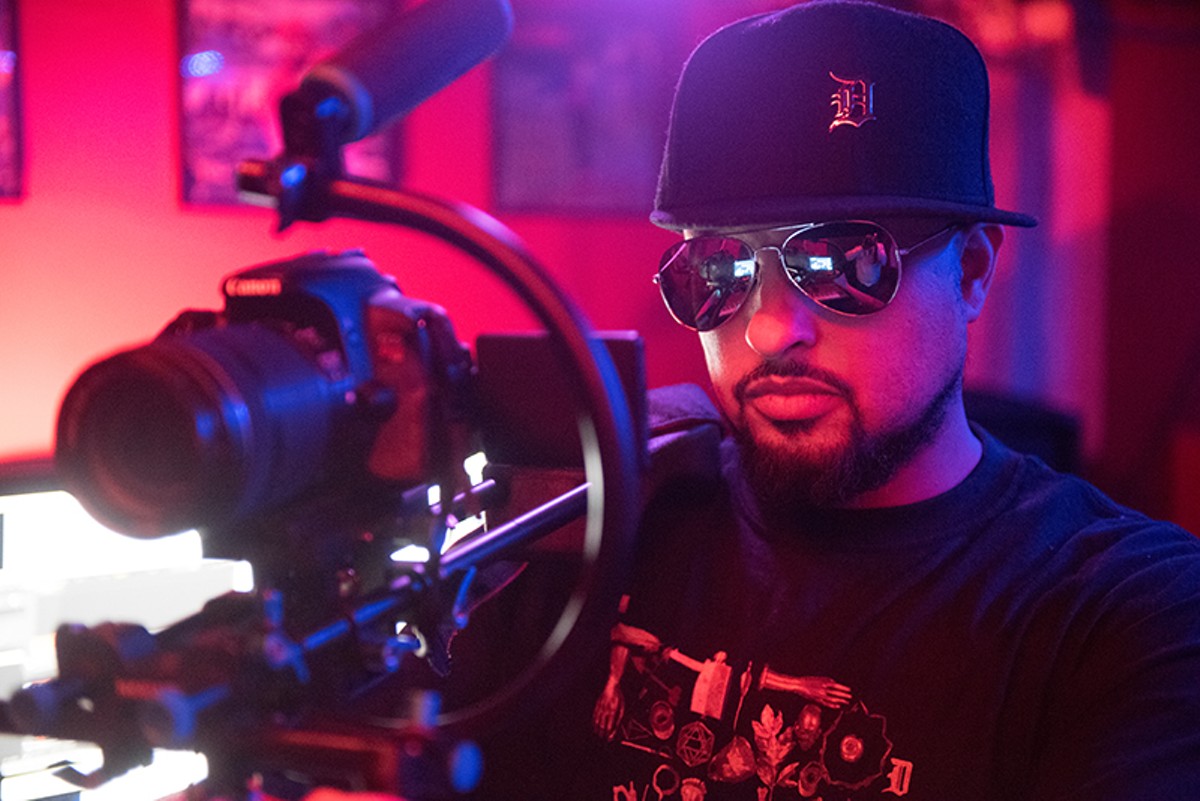 Ken Baxter's home studio space looks too chaotic to be productive. He's sitting in front of an Apple computer with about 9 million apps and tabs open. A turntable deck with a laptop in the middle is sitting to the right spinning, lit up, waiting for the needle to drop. A painting courtesy of Sheefy McFly, a portrait of the Mother Mary, and a framed X-Men comic book cover hang on the walls under the glow of a low-wattage red bulb.

"I tend to have a lot going on down here," Baxter says through a laugh.

Baxter, who goes by DJ Kage, has more than "a lot going on." A few clicks around YouTube and you'll see J-Nutty da Don's video "Back on My Bullshit" which Baxter directed, Wrexx Wright's "Zoning" video that Baxter also directed, and Lokye & Queez's "Been on the Block" on which Baxter produced the track and directed the video. And then there's the litany of his own songs and collaborations he's released, along with being a husband and father.

"I just try to stay focused and do everything at a high level," Baxter says.

But Baxter wasn't always everyone's favorite "go-to" guy for beats, DJing, and video filming. In the '90s Baxter started playing trombone in his middle school band got into making pause tapes using a Radio Shack mixer, and by high school he had built his first turntable. Back then, Baxter says he was motivated by ghetto tech just as much as he was by hip-hop.

"I was working at Coda in Eastland Mall," he says. "This was back in the days of Damaged and Used jeans. I used to play my mixtapes there. DJ Polo walked by and heard the music and was like, 'Who's music is this?' Baxter says. DJ Polo became a mentor to Baxter and he went on to meet DJ Flex, DJ Godfather, and DJ Ill Will. It was the height of ghetto tech and all of them were top DJs and heavy influencers as Baxter was still honing his craft. "Ray 'O'Shay was the first club owner and I believe it was DJ Motion who showed me my first DJ competition video," Baxter says.

Baxter graduated from Denby High School in 1995, went to Wayne County Community College for a couple of years and then transferred to Ferris State in Big Rapids. "I started getting hired to work parties up there," he says. The more opportunities he got to DJ, the more in demand he became. Baxter points to his degree in visual media production on the wall. "I started getting gigs at Grand Valley and Central, making 300 to 600 dollars a week," he says. "Man, I credit DJing with paying my way through college."

However, after Baxter graduated from Ferris in 2002 he decided to take a break from DJing. "I went into retirement," he says. "I was a DJ that had two turntables, a mixer, lights, speakers, and four crates of wax. That will kill your shocks loading up all this stuff. I kind of put that on the back burner."

Baxter bounced around the job market for a while until he landed at Jackson Dawson, a marketing agency where he currently does video production. However, the creative itch started to slowly creep back in, but this time he wanted to expand in to producing and not limit himself to being just a DJ.

"My music background was mostly drums and trumpet. When I started producing, I started teaching myself keys, bass, and a little bit of guitar," he says as he points to a Kramer Strat lying against the wall.

He did a few DJ gigs here and there, filmed Cheddah Boy Malik's video, "We Do It Big," and did some production work for Ruler Syph. But, overall, getting his name back out there was a lot harder than he thought. He never made a name for himself in Detroit as a DJ, as most of all of his previous gigs were on college campuses. He also wasn't truly promoting himself.

"I used to work for a lot of artists that would just come over and they would take beats and go out with it," he says. "I would never take credit for it. I felt as an artist I wasn't where I wanted to be to put my name on stuff."

Baxter released a series of mixtapes called "Random RMX," where he used popular songs and replaced the beats with those of his own. It was a way of showcasing his skills and getting his name back out there. Soon, Detroit hip-hop veteran ChampTown made Baxter his official DJ and he turned the other relationships he was making into a collaborative album called D-Imports Vol. 1 that he released in 2014. The album featured Ruler Syph, MonoChrome, Ice Water Mike, KANO, Siias Rage, Cheddah Malik, Candyman Fatal, and 10 other emcees. What made the album unique was the combination of artist that participated — there were traditional boom-bap emcees, street emcees, old school artists, and newbies.

"I just asked everyone I knew or had worked with for a verse," he says. "I didn't always tell them who else would be on the track but I did tell them to trust me."

Baxter released a sequel, D-Imports Vol. 2, in 2016, which was even more diverse and bombastic than Vol. 1. It featured 33 artists over 25 tracks and was highlighted by the single "Song of Victory," a head-nodding boom-bap track punctuated by sampled horns from Earth, Wind & Fire. The project received solid reviews, but a Donald Trump slipup in 2016 gave Baxter the biggest hit of his life.

"He was giving a speech here and somehow got 'town' and 'cities' mixed up and it came out 'Titties like right here in Detroit,'" he says, trying to hold back laughter. "I knew this was ghetto remix if I ever heard one."

The song, "New Massive Titties in Detroit," went viral almost immediately. The song was picked up by The Root and Fader, and Okay Player thanked Baxter for "Making American Jit Again." His Bandcamp page crashed and his social media numbers went up.

"Till this day I still get downloads of that track," he says. The song led Baxter to create more ghetto tech anthems and add collabs with Sheefy McFly to his growing catalog.

Currently, Baxter is finishing up D-Imports Vol. 3, a mixtape for Negus Arubis, and "Jitz 2" with DJ Dash. He's filmed more than 30 videos and produced well over 100 tracks, and he makes sure he balances his life as a producer and filmmaker with fatherhood and being a husband.