HAVING A WILD WEEKEND

In case you haven't heard -- and you'd probaby have to be a hermit with no access to the media or the Internets to have not heard -- the big gig news tonight is the Friendly Foes' CD release party for their new Born Radical album, being thrown at the Berkley Front in, duh, Berkley. The trio -- the brainchild of Thunderbirds Are Now! honcho and frequent Detour/occasional MT contributor Ryan Allen (in the same way my fingers automatically always want to type "Matthew Sweet" instead of "Matthew Smith," those same fingers sometimes want to type "Ryan Adams" instead of "Ryan Allen"...even though Ryan Adams is a dick and Matthews Smith, Sweet and Ryan Allen aren't) -- have assembled some choice power-pop on the new disc, which Laura Witkowski weighs in on in next week's issue.

Speaking of "dicks," Bush-supportin', "artsy-fartsy" neocon director/actor/"musician" Vincent Gallo will be at the Crofoot in Pontiac tomorrow night...but why anyone would care is beyond me. I was hoping I wouldn't have to hear much about him after leaving Hollyweird but he's been here twice in a little over a year. The dude -- certainly one of the models for insufferable director Billy Walsh on HBO's Entourage -- sucks, although speaking of sucking, you do have to give him some credit for getting Hollywood backers to finance a horrible indie film (that would be The Brown Bunny) solely for the purpose of him getting Chloe Sevigny to give him a blowjob on screen. The guy certainly has a talent for persuasion, if nothing else...

And, oh, yeah, our friends the Hard Lessons are at the Blind Pig in Ann Arbor tomorrow night. It's one of their final gigs with The Anvil before the powerful drummer heads off to the Golden State, so it should be a slightly bittersweet performance. Mick Bassett & The Marthas are at the Magic Stick. And the Cetan Clawson Revolution is at the Lager House tomorrow as well. The Detroit guitar hero is working on a new album...but more on that in a future post.

Finally, North -- the brainchild of UoM alumni Joseph Mancuso and Markus Nee -- will be celebrating their CD release (the guys' first after more than a decade of performing in Southeastern Michigan) with a show at the Ark in A2 tomorrow night. The duo are rounded out on the new disc by local folk veterans Jim Roll and Brian Lillie, who've played with a wide variety of regional folk-rock projects like the Witch Doctors, Blue Tango, Los Gatos, Delta 88, Great Lakes Myth Society and Orpheum Bell. 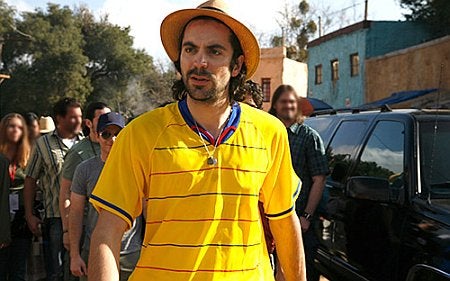