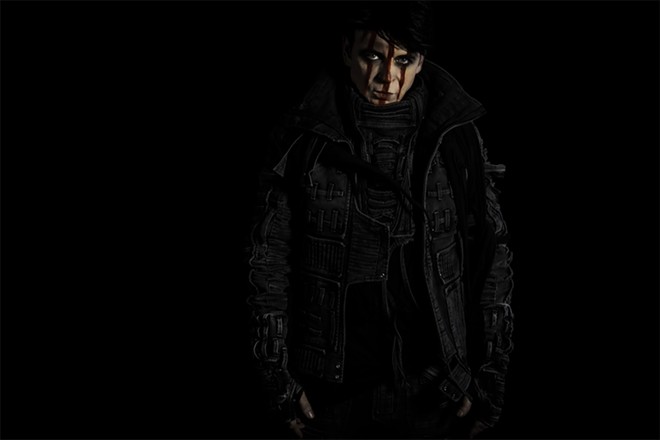 English musician Gary Numan’s career has spanned decades. Coming to the stage with his new wave band Tubewave Army in 1977, in 1979 he released his solo album, The Pleasure Principle, which arguably changed music forever.

Numan is a godfather of electronic music and inspired multiple artists along the way, selling more than 10 million records and winning awards for his achievements. The “Cars” singer will make a stop at Detroit’s El Club for a pair of shows in support of Intruder, his 21st studio album. Metro Times caught up with the 64-year-old electronic music pioneer to learn about the unexpected inspiration for the record.

Metro Times: Intruder centers around climate change, while your previous release Savage was a science fiction-themed piece. What inspired the change to switch from fantasy to reality, and how do these albums complement each other?

Gary Numan: Savage is set in the future. … It is very much science fiction, but it is based on a possibility of what the future could be like, should we not get on top of climate change in the coming years.

[For Intruder] I tried to find a different way of thinking about it, [which came from] my youngest daughter, Echo. She wrote a poem two or three years ago called “Earth,” and it was very lovely. The poem was the planet Earth speaking to the other planets in the solar system and explaining why it was sad, and what terrible things are happening here. She was only 11 or 12 when she wrote it, so it is a child’s view of it … and then I thought, well, that could be the way the Intruder works, where every song in the album is sung from the point of view of the planet — if the planet could speak, what would it say.

She’s very clever. It’s not just the ability to be able to put the words together. It’s the understanding, and the sympathy, the empathy, that came with it. I’ve had our album printed out on every format so that the first thing that people see is the cover, but as soon as they open up the album, her poem is the very next thing that you see. It was such an inspiration for the album I thought it was only fair and proper that the poem should be in there as well, because that’s what started the whole thing.

Metro Times: The sound of Intruder is so dynamic, and seems to pull inspiration from traditional Turkish music.

Gary Numan: I was inspired by a Turkish musician. I was talking to a fan a few years ago, and we were talking about how I’ve often had a hint of Middle Eastern melody and instrumentation in the albums before, but never a big, powerful kind of statement. But it’s always been there, little flavors of it. And he said there’s a man called Gorkem Sen that you should listen to, who’s a Turkish player who invented an instrument called the Yaybahar. He said it is, as far as I know, the only one of this kind in the world. He’s spent much of his life developing it. He’s the only one that can play it. And it was amazing, absolutely amazing. So we got in touch with him, we sent him some messages. And then I just said to him, “I’ve seen what you do, I’ve seen a session that you did with an electronic keyboard player.” I said I wanted to do much the same sort of thing.

To begin with, he was a bit suspicious. I think he was worried that I was going to get him on the record and then sample all of these amazing sounds that he makes and then go off and sell them. I felt a bit like a thief in the night … so we had to write out a contract where I promised I wouldn’t do anything untoward, and then he was happy when he got to know when he was fully involved, and he felt confident we weren’t going to steal anything. He was amazing, and he absolutely threw himself into it. He played on three songs, the first few songs in the album, actually. And I just think it’s a really amazing contribution to the record. It just adds textures to it, which no other instrument can do. It really was brilliant.

Metro Times: Intruder has a cinematic quality. What was the process for building the world of this album?

Gary Numan: I am a minimalist, but it’s the most capable studio I’ve ever had. I have one very large screen in the middle, which is like a giant iPad. There is a computer, which you can’t see, that’s hidden away. So there’s one big screen and a keyboard, and that’s it, and two speakers in the corner, and the chair, and that’s pretty much what’s in my studio. And yet within that computer, there is an absolute world of sounds and capability. So I sit at the keyboard and usually, I just bring up a general piano sound, and I just come up with tunes and start to weave them together, and that becomes the skeleton of the song. And then I start to explore all the different sounds that are in there, bit by bit. It’s very much like walking in the dark with a small torch — you’re looking for something, and you know it when you see it. So you just start to explore.

I’d like to say that it was all great fun, and it’s all very exciting, and I look forward to doing it every day, but that’s not entirely true. It’s often very stressful. You know that it needs something, and you cannot find it, or you find something and it’s amazing but you cannot make it fit, and it’s really frustrating. I write something in the morning, and I just go, “Oh that’s just fantastic, I love that.” And by dinnertime, I’m not quite so sure, and by early evening, I think it’s an absolute pile of shit and I don’t know why I wrote it in the first place … so it isn’t always fun. It is sometimes quite tortuous and painful.

Metro Times: Your daughters provided some background vocals on the album, so is it safe to say it’s all in the family, and can we expect a release from the girls anytime soon?

Gary Numan: Yes, definitely. The youngest one, Echo, who wrote the poem, she’s not heading in a musical direction, but she wants to write, she wants to write stories, she wants to write poetry. So I firmly expect her to be published at some point in the not too distant future. The other two are very musically driven, and they both want to be making albums. They write songs all the time. Raven was writing a new one last night, Persia just wrote one … I would be surprised if, within the next year, they don’t have things out somewhere. It might be on Bandcamp or something.

Romanian import and Greek school dropout Konstantina Buhalis was born in Bucharest, Romania, and came to Detroit in December 1995, where her first few years of life were enjoyed on the east side and Greektown. Buhalis spent her early years reading the Detroit Free Press, Teen Vogue, and Rolling Stone and began...
More
Scroll to read more Local Music articles
Join the Metro Times Press Club