From public access to 'Tim and Eric,' David Liebe Hart has no idea what's going on — and neither do we 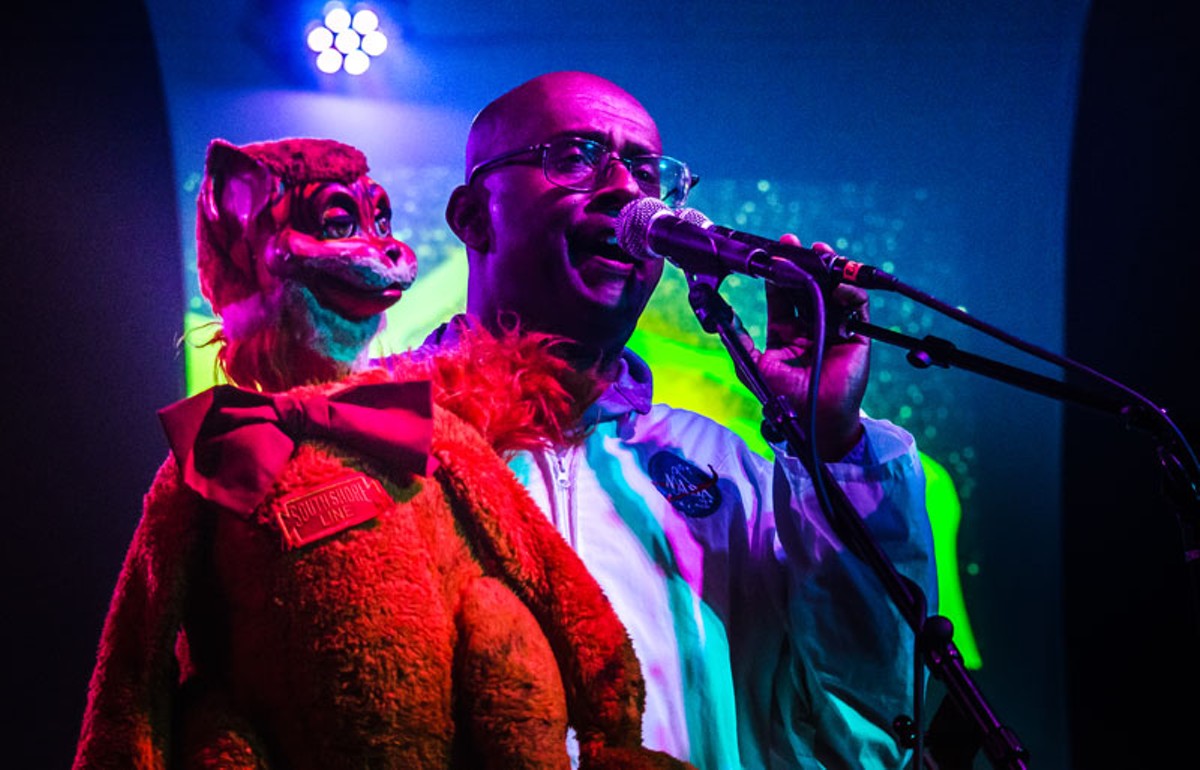 David Liebe Hart cares about three things: trains, aliens, and finding love. But mostly, trains — as nearly 30 minutes of our hour-long conversation were spent discussing the Chicago Milwaukee North Shore Railroad which, to his dismay, discontinued rail service in 1962.

Hart's is far from a household name. But for fans of the eccentric puppetry and off-key vocal talents of the 61-year-old musician, puppeteer, and devoted Christian Scientist from his recurring appearances on Adult Swim's surrealist sketch series Tim and Eric Awesome Show, Great Job!, Hart is more than a household name — he is a cult comedy icon.

Engaging in conversation with Hart is a bit like some sort of ADD Olympics. Posing a question as simple as "how is your day?" will spur a meandering diatribe.

"This trip has been very rough on me. It hasn't been a good tour," Hart says, while (speaking of trains) boarding a train home. "I had a fan watch my merch and they ran off with my expensive Apple phone. I have a free Obama phone from when I was unemployed. I was unemployed for a while."

Posing a follow-up question, however, will likely go unanswered because the guy never stops talking. Hart artfully derails every topic by providing a detailed list of people who have either betrayed him or owe him money, often including their middle name, street address, phone numbers, and the exact date on which the alleged betrayal occurred or the amount of money was owed — sometimes both.

Oddly enough, this is what makes Liebe Hart so incredibly endearing. Nothing is taboo (with the exception of watching pornography, but more on that later) and no amount of off-the-wall claims make him feel uncomfortable. In fact, he's almost excited to be able to tell you about the time he claims he suggested to Pizza Hut that they make a breakfast pizza and when they did, many years later, they failed to give him credit or any money.

"If you have any ideas, keep them to yourself because there are a lot of thieves," he suggests.

During a 2012 panel discussion at Sundance, Tim and Eric's Tim Heidecker and Eric Wareheim credited the bottom of the audition pile when it comes to sourcing the show's revolving door of uncomfortably off-the-wall characters. "We dig through the bottom of the pile and find them, then give them lots of lines," Heidecker said. "We cast some legitimate character actors, as you saw, some real funny comedians, and then some people that — we like to say — put a headshot up online and forgot about it, maybe."

What is made immediately apparent is that Liebe Hart believes there may be some grand conspiracy against him in Hollywood and abroad. He tells me that he auditioned for a role that he was promised but went to Denzel Washington. There are a dozen instances of similar alleged casting injustices, too, though he often botches the names of the A-List actors who "stole" his gig.

But for every glimmer of "maybe he's telling the truth," there are seemingly infinite unfounded claims. Among these unfounded claims, for which there is little to no proof: that Jim Henson was his Sunday school teacher, that Robin Williams was his roommate, and that he has appeared on The Gong Show, The Dating Game, and Star Search. A low-quality YouTube video reveals that he was in fact on Good Times, though only for a few seconds during the end credits.

Where Liebe Hart really flourished was as the host of Los Angeles public access show Junior Christian Science Bible Lesson Program, of which there is amazing, recorded evidence. For 20 years, Liebe Hart and his puppet friends "Chip the Black Boy" and "Doug the Dog" provided a safe space there, "where all are accepted and none are rejected."

Writers and fans alike have speculated that Liebe Hart 's behavior could be part of a longer con, much like the performative comedy of the late Andy Kaufman. For someone who says he attended the Goodman Theatre in Chicago, the Art Institute of Chicago, and the University of California, Berkeley, to study music, this doesn't seem wildly off base.

"I like playing piano. I'm a church organist and I write religious music, but unfortunately the Christian Science Church I was raised in told me they didn't want any music from a Negro. I wrote beautiful new hymns," he says.

He also writes about his many brushes with paranormal activity. "Ghost Frog" details a field of glowing ghost frogs who he says were displaced by suburban sprawl behind his childhood home that would often move things in his room and stare at him through windows. And then there's "Pickle Man and Mr. Moose" about two German shepherd dogs that were murdered on the south side of Chicago. "They came back as ghosts and haunted me and tickled me and played with me," he says.

Liebe Hart says he remained friends with La Rent for a long time. He says he was even invited to Starkorendor, a planet 1,100-light years away, and would visit while he would watch Bewitched or I Dream of Jeannie on TV.

"I was abducted, and samples of my skin were taken and I was operated on by aliens and I was gone for two weeks in 1968," he says. "I would be lonely by myself and they would appear and they were my best friends, and now they don't contact me anymore."

Usually, when conducting an interview, you're given a very strict time frame. Often 10 minutes, 15 if you're lucky, 20 if the subject's manager or team is not listening in to reel in a conversation that has coasted off the rails. With Liebe Hart, he could have talked for the entire duration of his train ride from Oregon to Los Angeles. But hidden deep within his many complaints and his otherwise sad string of bad luck, there is a guy who just wants to make it — the ultimate Hollywood story. Even if his tale is some elaborate, lifelong ruse, not even Denzel Washington could fake loneliness this pure, and for that reason, we have no choice but to root for Liebe Hart as he continues to live his dream. (Even if it's only in his head.)

Liebe Hart says his dream is "if I could meet a beautiful lady in my life who is single and attractive to my liking, who is a musician and an artist like I am." His other big dream, "is to put the Chicago Milwaukee North Shore Railroad back in business."