Ferndale Radio stands on the shoulders of 20 years of protests, pirate radio 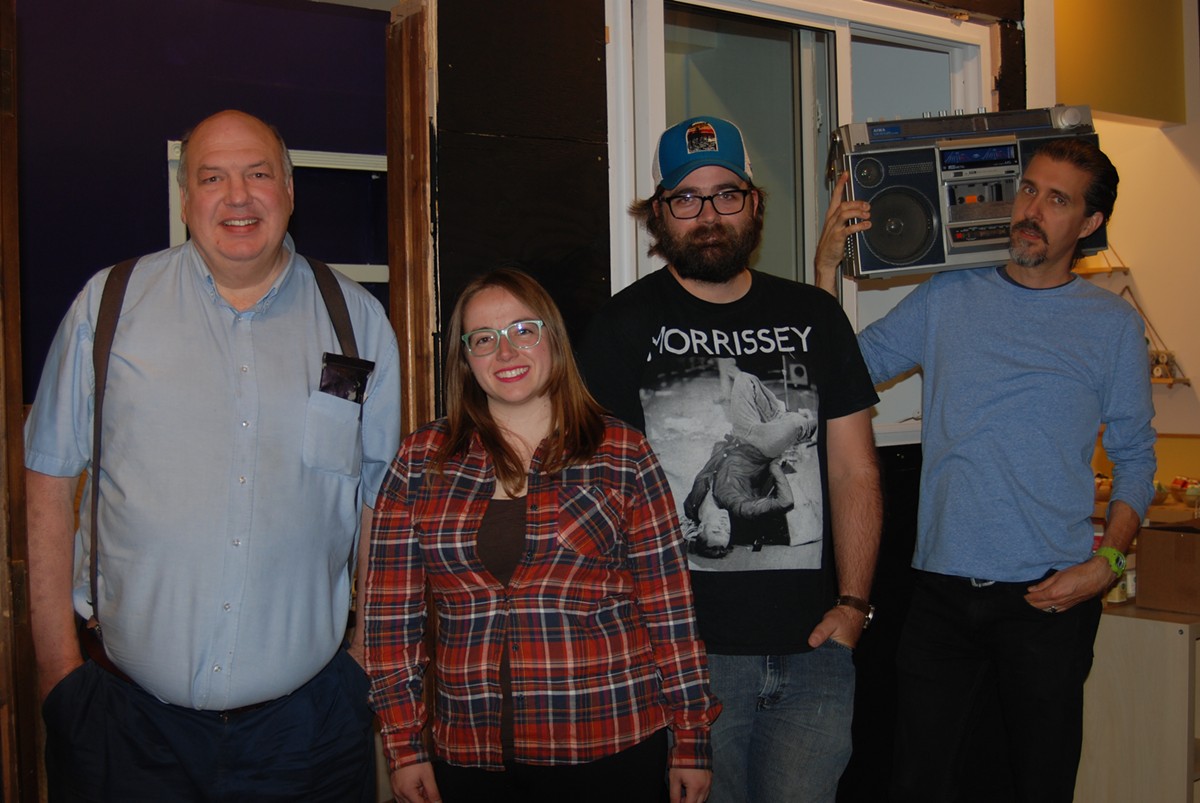 On Friday, a group of radio nerds will see a dream realized and make Ferndale history when Ferndale Radio begins broadcasting live from the Rust Belt Market on 100.7 FM. Ferndale Radio, or WFCB, is a Low Power FM (LPFM) radio station, a noncommercial service that can operate at a maximum power of 100 watts, providing coverage of roughly three miles in any direction. These types of stations are rare; in top 50 radio markets they are rarer yet, and those associated with a city — like Ferndale Radio is, rather than a school or college — are virtually unheard of.

It's the goal that Michelle Mirowski, Dave Phillips, Jeremy Olstyn, Keith Fraley, and Dave Kim have been working exhaustively to bring to fruition for seven years. The station has been on-air since August with pre-recorded shows while they constructed their studio space at the Rust Belt. Live broadcasting hours will be the same as market hours, and shoppers will be able to look into the studio's windows and see local DJs playing a mix of music, talk shows, and event coverage specifically focused on Ferndale and surrounding areas.

Olstyn, who has also managed Cousino High School's radio station, Exile Radio, since 1999, describes some of their ideas for live, on-air shows. "We want to start "Talk-o" (or taco) Tuesdays, featuring a variety of local talk shows, some of which are currently local podcasts," he says. He also says topics like local high school sports and coverage of local events like DIY Street Fair and Pig & Whiskey "will surely find an on-air home at Ferndale Radio as well."

Mirowski, Ferndale Radio president, elaborates, saying, "We also want to partner with Ferndale elementary schools, high schools, even colleges in the area and do something with them. We'd like to air local sports games, too."

The planning and executing of the station has been a juggling act of engineers, architects, city approvals, FCC applications, and building permits — elements that were dizzyingly dependent on one another. As recently as this summer, the project still could have come crashing down, had they not managed to raise the money for the station antenna, install it on the Rustbelt roof, and get the station signal on the air before the FCC deadline.

"There were points where I felt like I was working two 40-hour jobs, trying to juggle everything, sleeping like three hours a night," Mirowski says. "Everything was so time-sensitive at certain points."

Though the station met its deadline and raised enough money for its equipment, it will require around $5,000 yearly to run. They are accepting ongoing donations and also looking for more businesses to be underwriters.

The push for LPFMs goes back much further than Mirowski and her crew. Stephanie Loveless — the publisher of the now-defunct Jam Rag, a Detroit music and politics magazine — was on the ground floor of the movement for legalizing LPFM radio stations when she formed the Michigan Music is World Class (MMWC) campaign in 1996.

"The local bands, like always and everywhere, were having a hard time getting their music out and getting noticed," she says. "We called for a series of weekly meetings and a consensus quickly emerged that the best thing by far would be to try to get a little airplay for our local independent bands. Our first project was to hold a three-station 'radio-rally.' We owned the news cycle on all three local stations that day! From that, WRIF launched a weekly local music show."

MMWC was part of a larger movement across the U.S. in which activists protested their lack of access to public airwaves. Amplified by the Telecommunications Act of 1996, the broadcast market's drastic deregulation enabled corporations to gobble up media companies, shoving the industry toward dumbed-down, homogenous programming devoid of diverse voices and local content.

In the midst of this media climate, MMWC focused its efforts on garnering support for the FCC establishing an official LPFM service. It organized public demonstrations, collected support letters from 10,000 individuals, and convinced about 40 local municipalities to pass resolutions in support of their efforts. It also supported the pirate radio LPFM stations who didn't wait for FCC approval and, as a result, were being raided by the agency at an increasing rate.

The years of effort paid off, and in 2000, Congress and the FCC bowed to public pressure and voted to create low power FM radio service. The victory, however, was incredibly short-lived. Lobbyists from the National Association of Broadcasters and, surprisingly, National Public Radio as well asserted tremendous pressure on Congress, and a few months later, the ruling scaled back by about 90 percent. New regulations, which increased the distance that LPFMs had to be from other stations, left no room for LPFMs to squeeze in on the dial in congested top 50 markets, and LPFMs were left to mostly rural areas.

"It was an extremely frustrating and politically eye-opening experience for us," says Loveless, who dropped out of the movement in the early 2000s.

Activism continued over the next decade, including studies that proved LPFMs would not cause interference to larger stations. On Jan. 4, 2011, President Brack Obama signed the Local Community Radio Act, loosening the rules enough that an LPFM station in metro Detroit was finally possible.

After the signing of the legislation, those hoping to start LPFM stations had to wait two and a half years for the application window to open. In the interim, the Ferndale Radio group established the nonprofit Underwood V Radio and got to work gathering support. It set up their Chuffed account and made an exhaustive amount of in-person visits to Ferndale businesses to raise the $15,000 it would cost for a transmitter, antenna, and other necessary equipment. Mirowski says she has personally spoken to a majority of Ferndale business owners regarding donations. Some became underwriters for the station and will receive on-air plugs in exchange for their support. There were also those who sought Mirowski out themselves to donate.

"The Ferndale community has been amazing. Everyone has been so supportive," Mirowski says. "There were a few Ferndale residents that were like, 'Here's $1000, we really believe in this and we want this to happen," Mirowski says. "We are forever grateful for them."

The FCC approved the group's application for a building permit in 2014. Around this time, Mirowski and Loveless connected. "We were thrilled beyond words when Michelle introduced herself by way of announcing they had received a construction permit for an LPFM station, not just in metro Detroit but in our hometown of Ferndale," Loveless says. "It looks likely to be the only LPFM station in this area [in] probably forever."

With the permit in hand, the group now had to secure a suitable location for the station with a nonexistent budget. After a spot in a government building turned out to be not enough space, Loveless connected Mirowski with Rust Belt Market owner Chris Best.

"Jeremy and I met with Chris and after like 30 minutes of talking we were like, 'This is perfect,'" Mirowski says. "It was one of those things, like a really good first date. That was exactly how it felt."

Best offered Mirowski an exchange; the station would be housed at the Rust Belt Market, rent-free, and the Ferndale Radio would plug the market, including any event they host, as payment. "It was actually in our business plan to have a radio station in here, but we didn't know anything about FCC guidelines or any of that when we started," Best says.

Olstyn, Ferndale Radio training and program director, sees Ferndale Radio as an opportunity to serve the local community in a way that commercial stations don't.

"When I got into radio in the early '90s, the medium was still pretty comfortable as the only game in town when it came to impacting and molding listening habits — pre-internet, right?" he says. "But in commercial radio, it didn't matter what radio market you were in, you would kind of always hear the same thing; radio stations were treated more like real estate transactions than reflections of community that would 'serve the public good.'"

Olstyn left commercial radio in 1999 to work at Cousino High School's radio station, WPHS, Exile Radio, in Warren, as a night manager. "That was really my first taste of what a community radio station could sound like. I was hooked," says Olstyn, who still manages Exile Radio 18 years later. "It was really this high school station that renewed my faith in what radio could be, serving a specific community, sharing stories, turning listeners on to new music in a variety of genres. So when you look at a city like Ferndale, I think an LPFM station makes perfect sense. It seems to me that if there is going to be an LPFM station anywhere in metro Detroit, of course it would have to be in Ferndale."

More information on Ferndale Radio is available at chuffed.org/project/ferndale-radio.