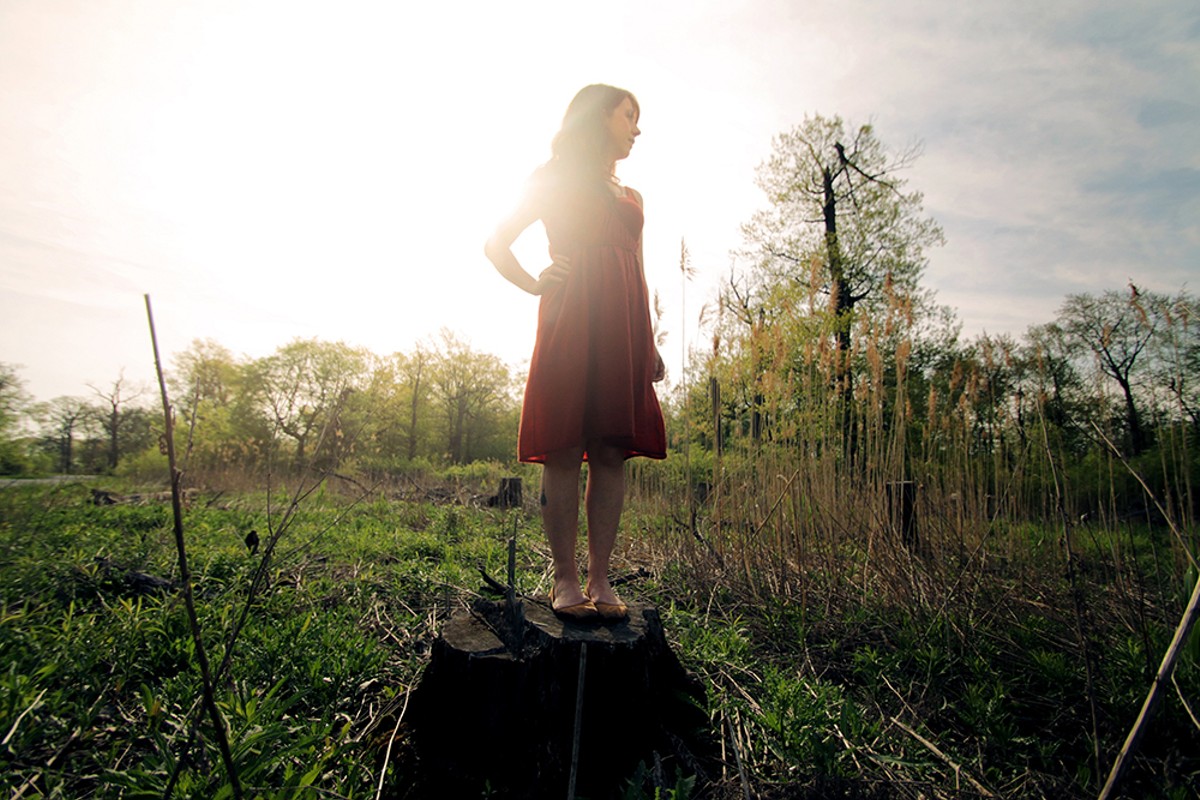 Emily Rose admits she's a perfectionist. Not that everything has to be perfect, but her songs, and even more specifically the stories in her lyrics, need to feel just right — they each need to find and address a truth, or a struggle, or an ineffable urge of the soul. That struggle isn't always resolved on her new album, Wake Up Brave, but a hopefulness is always located.

And when I posit that as a theme connecting her nine new folk songs, she lets her easy laugh prelude an appraisal that "...that's a cheesy way to end an interview!" I tell her interviews can often feel cheesy, but Rose then goes on to regret some of the wording of her previous responses. Like when she compared herself and her fellow songwriters to hens in a coop, with some prolifically producing eggs, while others, like her, wait for the proverbial golden one.

It's been seven years since the Detroit Music Award-winning singer-songwriter's last album, Porchlight Tragical. And while the title of her latest, Wake Up Brave, suggests one's springing up and into the next day's sunlight with an unthinking and courageous propulsion, the truth is many of the characters and plots of these "new" songs have been restlessly waiting all that time for Rose to be ready to pull off the covers, as it were. Not that we should overthink the metaphors here — that's something Rose admits to doing enough of with her songs.

"But Wake Up Brave isn't exceptionally metaphorical," Rose said. "For one, it's actually a lyric from a song, 'Missouri River Bridge.' It's just that the word 'brave' was tumbling around in my head because a lot of the songs are about taking risks — like taking the risk to love, being one who gives fully even though you could end up losing your heart. And it can depend on what 'bravery' means to because sometimes foolishness and bravery look the same."

Brave's songs were recorded with the measured accompaniment of guitar, drums, and softly pressed keys from a humming organ. But the focus is on Rose's own acoustic guitar strums as they serve her tender voice and tuneful narratives, as she sings in a breathy lullaby style that declines any showy balladry so as to keep the focus on the lyrics. She's already proven her vocal strengths on the poignant choruses from Porchlight Tragical, but this time around, as she puts it, "I'm not trying to impress. Because that just creates," she pauses, "a pressure. It's the story that brings the focus to the words. I want the story to get heard. When someone says I have a nice voice, I always say, 'Thanks,' but I really want to ask: 'What did you think of the song?'"

Rose has been recording Brave for almost three years, and it took until just weeks ago for her to find the right album title. Words are paramount for Rose — every verse's syllable is ripe with potential for moving the story in the perfect way, or the most perfect way possible. So she hopes you're listening closely, because every song is based on a true story, or are verbatim retellings of her own experiences. Each is a unique tale, set to the melodies on her guitar, reflecting on a risk.

"To me, [Wake Up Brave] is about deciding to take the risks," she says. "At the end of any segment of your life where you come to make some judgment calls for yourself, I know that I'm always going to wish that I would have taken the risks, regardless of the pain they caused. At least, then, I know the outcomes. I won't have to wonder what could have been, because I traveled the course. I got the splinters."

Rose said that the early morning is when she struggles most with anxiety and depression, which not only ties into the overarching meaning of the album title for but hopefully strikes a chord with anyone listening. There's suspense in every morning, not knowing exactly how your plans will go. "And that takes it away from being proud, like, 'I'm so brave that I took a risk and got hurt!'" she says. "It's more down to earth and just encouraging you to try your best."

Listen to a story sung by Rose and you realize that we're all just trying our best, even if we're not successful in romance or even finance; these songs are always letting the light in with their last lyric — a hopeful refrain.

She says that as she's evolved as a songwriter and performer, her ideal concert environment would otherwise be unamplified, outdoors, with an audience set close enough to hear every word. The possibility that everyone is listening with an equal amount of attention that she herself gives to each word encourages her "to write songs that have some element of light to them," she says. "Even if there's an overtone of a tragedy... which, there often is with my music."

Her radiant laugh breaks any tension with a note of self-deprecation. "It's not sunshine and daisies!" she says. "But the audience does encourage me to let the light in, so I would like people to walk away from the show feeling good. Or at least better than when they came in!" And that winsome laugh returns. "At least not worse!" She repeats it like a mantra: "At least not worse!"