Earl Slick on what he misses most about David Bowie 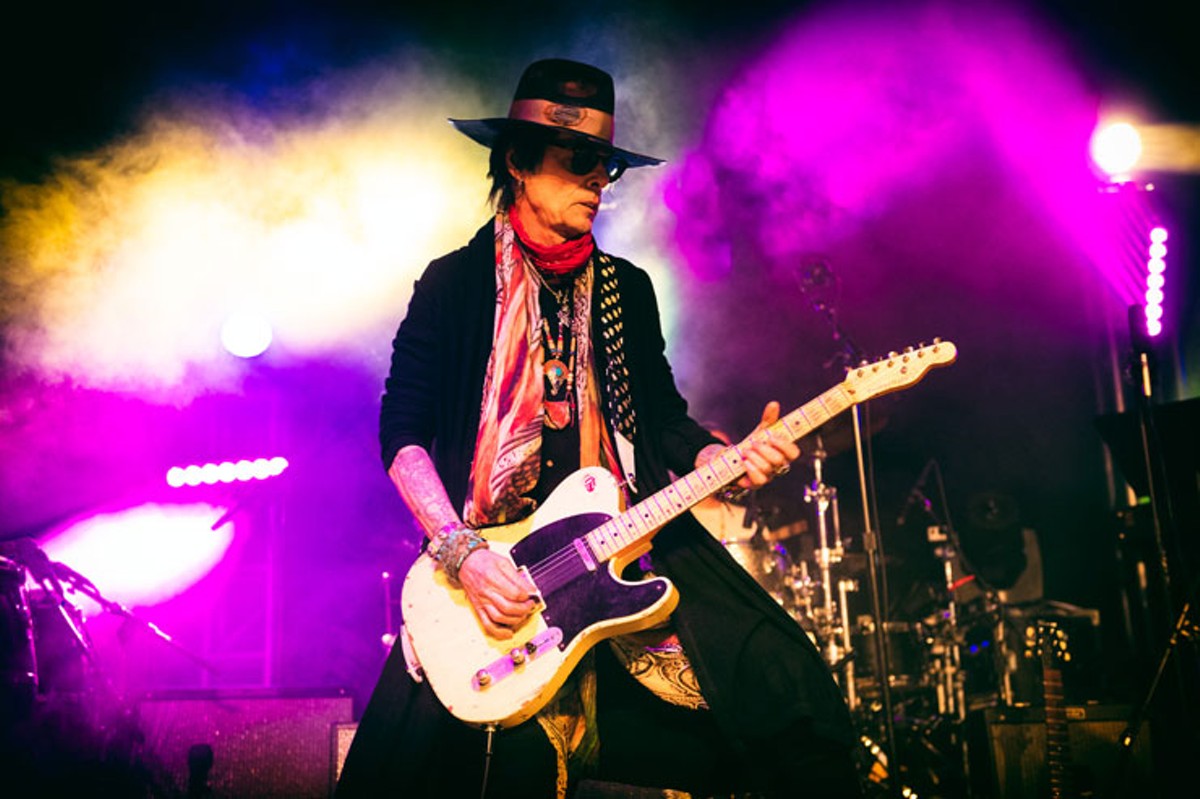 Guitarist Earl Slick spent the better part of his adult life as David Bowie's go-to guitarist — a tall order, but one that Slick was more than ready to take on. And the 65-year-old is still Bowie's earthbound sideman, two years after the icon's death — we caught up with him between rehearsals for the Celebrating David Bowie tour in North America. Though the material is, at this point, a marriage of muscle memory and the preservation of legacy, of all the obvious challenges, Slick admits his No. 1 priority is to get it right. For some, this is the closest they will get to a Bowie performance. For others, it's a time capsule of rock 'n' roll's golden years. As for Slick? It's a celebration.

Metro Times: For most, tackling David Bowie's material would be a daunting, perhaps an impossible feat. What goes into preparation for the Celebrating David Bowie tour?

Earl Slick: Well, my phone hasn't stopped ringing since 7 a.m. It's been hectic. But with rehearsal, the biggest thing we have to contend with is picking the right material. That way the audience gets what they need and what they paid for. My priority is always the people that work hard for their money and come to see us play. And they come to get what they need. We try to put a set list together that will accommodate that as well as give us what we need to be happy.

MT: What is it that you need?

Slick: Just a few key songs here and there. Like "Station to Station," which is long, but people love it. Once we can stretch out a little bit — we don't want to, you know, [play] a two-hour greatest hits set. We throw some odd ones in there. There will be certain cities where we'll have to do certain songs. I would say maybe every few cities we will pull out a few and swap them out. Like "Panic in Detroit," for you guys and "Young Americans" in Philly.

But with David it was insane. He would walk into a dressing room before a show, suddenly half the set was gone and there would be a whole new bit in there with no notice.

MT: How do you put a new take on old songs? What's the trick to performing familiar material?

Slick: Vocally, you want to capture his essence. What you don't want to do is try to be David Bowie. That is going to disappoint the audience. We have Bernard Fowler and he's been one of the main backing vocalists for the Rolling Stones for the past 30 years, he does all of their vocal arrangements — but he's one hell of a front man. People love him. And you know what? he's nothing like David. He doesn't sound like David, he doesn't look like David.

We kept it as close to the bone as we could. I think I coined the phrase "Bowieoke." I said that to David when he was still here. Bernard and I were doing the Station to Station tour. I didn't know he was ill at the time but I called David and told him that we were going to do this and if he was cool with it. And the first thing he said was, "Who's singing?" I told him not to worry, it's Bernard Fowler. David was laughing, and kept thanking me. And I said, "You don't have to thank me, because there was no way I was going to go up there with a clone of you." And that's when I said no Bowieoke. He got a big kick out of that.

That would make a good T-shirt. "No Bowieoke." [Laughs.]

MT: It's possible that the most iconic Bowie riff happens be one you came up with. Do you remember the production of "Golden Years"?

Slick: I stole it. [Laughs.] Part of that riff is from Eric Clapton's "Outside Woman Blues," which is on an early Cream record, and the other part is "Funky Broadway" by Wilson Pickett. To be honest, at the time, I didn't realize it. It was years later when I was like, "Oh, I ripped a Clapton lick." But Clapton ripped some licks, too. We all do. [Laughs.] If you listen to the song, you'll see what I'm talking about.

When it came to recording, I would walk in and David would have a framework ready and we would sit in the coffee room with some acoustic guitars and bang them around until something happened. It was always a collaboration.

MT: Was there ever a point where you felt you might not be able to perform David Bowie songs without him? Or has the Celebrating David Bowie project been a cathartic healing process?

Slick: To be honest, I was nervous about it. It was like, look. David is gone. But Mike Garson has been here since 1972, and I joined in 1974. We have original members. That made me feel better. I didn't want it to look like, OK the boss is gone now, it's time to cash in on that. That was my biggest battle.

You know what happens when someone passes away in this business, everybody tries to grab a buck off the dead guy. Once I did a few shows I realized it's OK. I saw how the fans reacted. And just from a soulful point of view from me, it feels good playing the songs. Not in a nostalgic way or a sad way, but just because I love the damn songs. The experience feeds everybody.

I think David would absolutely love what we're doing because we're doing it the right way.

MT: What do you miss most about David?

Slick: I spent, on and off, my entire adult life with him. Since I was 21 years old. That's a long time. I miss those smiles on stage. Either I would do a really great solo or I would make the biggest mistake on the planet and he would laugh. He was easygoing like that. I would make a whopper of a mistake and he would just laugh. We used to stop at truck stops a lot and we would buy really stupid things and play with them on the bus like kids. I miss that part.