Plus: A walk on the wild side with Rebecca Goldberg 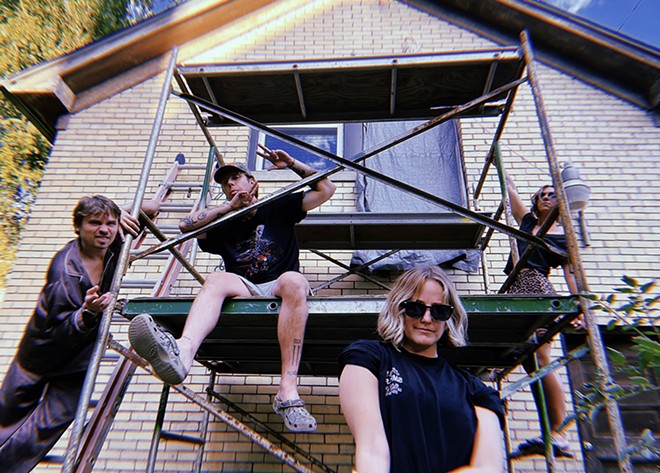 Double Winter’s solstice show returns: Released in the throes of the 2020 March lockdown, Double Winter’s latest full-length offering It’s About Our Hearts finally delivered a whole picture of the band, dabbling in space rock with retro psychedelic and ’50s surf sounds, and lead vocalist Holly Johnson also taking a cue from the ’90s lyrical stylings of Kim Deal and the Breeders. Prior to this long overdue proper LP, the band earned a great reputation for its live shows over the years, with regular slots in all the usual Detroit bar venues and local fests like Hamtramck Labor Day Festival. After returning to the stage with a renewed lineup this year, the band is ending 2022 with its Double Winter solstice concert at Outer Limits Lounge. Of course, the show happens during the Dec. 21 winter solstice, and the band may have a couple of special surprises to mark the occasion. An opening set from Rachele Eve’s dreamy band will set the tone, and regular Outer Limits DJs Haven’t You Heard? will keep the seasonal celebration going into the evening. Tickets available at the door.

Detroit Frequency soundwalks: If you’re looking for a post-holiday mind bend, look no further. Detroit’s own “313 Acid Queen” Rebecca Goldberg is leading a series of six bimonthly soundwalks called “Detroit Frequency,” and her third installment will focus on the sounds and textures of Detroit Industry at Fisher Body Plant 21 from 2-3:30 p.m. on Monday, Dec. 26. Originally built in 1919, the Fisher Body Plant 21 is a 600,000-square-foot former General Motors auto plant on a 4.7-acre parcel of land owned by the City of Detroit, vacant since 1993 and located at 6051 Hastings St. In her own words: “Expect a walk where you focus on the sounds around you, immersing yourself completely in the environment that you’re in. Soundwalking can be a very rejuvenating and meditative experience. As an ecological practice, soundwalking can be an entertainment or a method of inquiry, a call to action or a meditation. Deep, active listening can enrich and stimulate creative responses in day-to-day life, as well as inform the design of our built environment.” You can register at eventbrite.com.

Werewolf Jones drops sophomore album: Detroit punk outfit Werewolf Jones is a staple of the local music scene, and its sophomore album Rot Away is a prime example of why. Brimming with energy and reckless abandon, the record is an unrelenting ode to grit and glory, representing impressive growth in songwriting and musicianship since the band’s debut Premium. The music makes you want to lift a 12-pack from your local liquor store and shotgun them with strangers on the street, laughing maniacally all the while. From the Big Neck Records Bandcamp page: “The band has always oozed the very essence of their hometown of Detroit and Rot Away only cements them as one of the most exciting and authentic punk bands wreaking havoc in the midwest today. Full of grime and sweat, partying too much and sleeping too little, Werewolf Jones invites you to join them in the dirt and you would be a fool not to accept the offer.” The trio had their release party at UFO Factory on Friday, Dec. 16th, along with pals Toeheads, who were also celebrating the release of their recent EP A Cruel Winner’s World, and the whole affair was a hell of a good time.

Get familiar with the electronic jazz of Jihoon: With Detroit being the birthplace of techno, and a key influence on 20th century jazz, Motor City artists take inspiration from those eras and often meld the two genres together. As is evidenced by all the original songs on Theo Parrish’s recent DJ-Kicks compilation, there is a seemingly infinite number of new local artists taking this hybrid, genre-agnostic approach to music production (and doing it extremely well). Jihoon is the label boss of One Spoke, which often features a collective of like-minded musicians playing together to create electro-jazz freeform jams. His latest offering Explanations, released digitally earlier this month, is a small collection of songs performed in part with Eric and Omar Meftah with a remix from Thomas Xu. Composed mostly of groovy keys, equally groovy bass lines, tight drum licks, and a few gorgeous flute flurries, the EP is another example of this fruitful music scene in the city. Available for download via the One Spoke Bandcamp page, you can also find the vinyl in record stores locally and worldwide online.