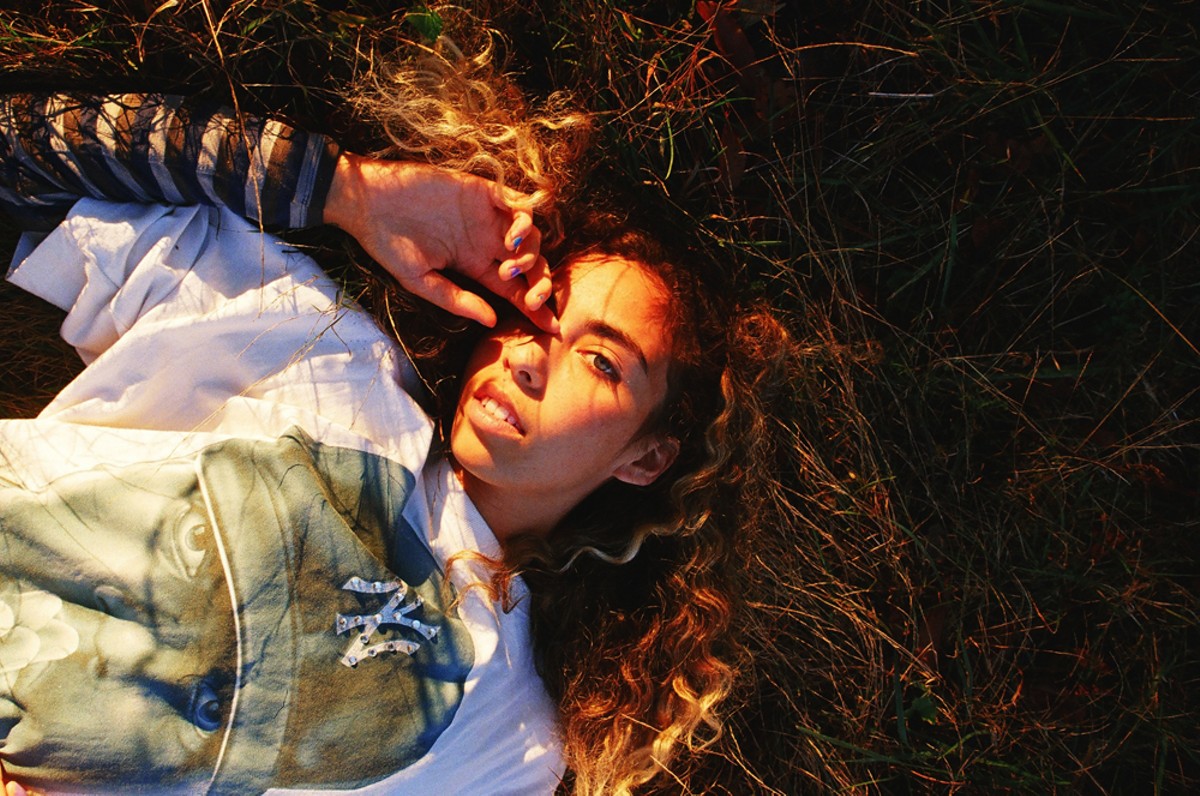 The Asheville, North Carolina singer-songwriter broke through with her 2018 debut record, I Love My Mom, which found the then 20-year-old confronting the weight of first-times as she did on the album opener, "How I Get Myself Killed" and on "Sick in the Head," where De Souza explored nostalgia tied to fleeting moments of teenage rebellion. Then there's "Home Team," a song that resurrects the term "going steady" before confessing, "I don't like fucking boys who need to know what to say when there's silence in the room." And on "Ghost" De Souza delivers perhaps the best line in reference to a millennial/Gen Z dating phenomenon:

"If you ghost on me again, these tits will ghost on you forever."

None of these examples would lead you to believe that, amid the flurry of emotional lo-fi — which is in the same emotional songwriting vein as Lindsey Jordan's Snail Mail, fellow-Asheville-ian Angel Olsen, with some of the gloomy ruminations of Phoebe Bridgers — I Love My Mom was written as a therapeutic means to ease De Souza's crippling anxiety. Even less detectable is the fact that De Souza and her bandmates Owen Stone (bass), Ethan Baechtold (guitar), and Jake Lenderman (drums) released the record on a lark.

"It's been a wild ride," she says. "We kind of just put that out for fun, and then it took on a life of its own. And we started touring, which was something I had never done before. Now there's just a lot more going on in my day-to-day life than there used to be. I used to have a normal job also, and now I have music."

Before I Love My Mom, De Souza held down random jobs, one of which was with a hemp company. From the age of 9, De Souza was encouraged to make music; she performed her first show at 11 years old. Only in the realm of making art, writing, and performing her songs — which she says often comes from a place of "heightened emotion"  — was she able to ease the anxieties that kept her from being fully functional, struggling to accomplish seemingly mundane tasks like customizing sandwich toppings when ordering food at a restaurant.

"It used to be so hard for me to go even into a grocery store and, just, being in the environment with all of the really bright lights and society doing [its] thing as a whole, and the beeping and old people with their walkers and babies and children pushing around those little customers-in-training carts," she says.

"That album [came] after a huge breakup ... so I think that, if anything, I've become, like, a very functional person at this point. And I've had to be because of touring. It's like I've come out of that bad season. I feel just very able to do things very functional and a lot happier."

Perhaps the only glimmer of De Souza's apparent trove of anxiety on the record can be found, and felt, on "I Had to Get Out," the solemn and sparse album closer that finds De Souza questioning why everything seems to happen at once, going on to apologize for being heavy and "crushing" someone again. "I thought I was patient/ waiting for the seasons to change/ but nobody else in this Bible Belt was standing quite still enough for me."

Once you cut through the deeply embedded anxious tones, the record's confident defiance, and the unexpectedly catchy hooks ("Take Off Ur Pants" is particularly hypnotic), the heart of the album and De Souza's fountain of creativity is right there in the title: her mother.

Having grown up in a conservative town under her mother's care after her parents divorced and her older sisters had already moved out, De Souza says she was always a bit different, and her mother's boldness rarely served as a camouflage for the youngest De Souza.

"When I was in school, she had this red truck that had naked Barbie dolls and action figures, like glued to it on the hood and on the top," she says. "Like, they were all just hanging out. And she had painted flames on the side and painted bombs on the side with [the] names of countries that had been bombed. She used to pick me up from school in that, and it really shaped my schooling days because I was already made fun of a lot for being just very different. ... The truck really just let everyone know that, you know, this girl comes from something that's very different from everybody else."

But since the days of Barbie's nightmare truck, De Souza has fallen in love with her mother's determination mind and creative drive. When asked what it is about her that she finds inspirational, De Souza delivers a winding and glowing review of all things mom.

"Anytime she has an idea — I mean, she has millions of ideas, but I guess, like, a thousand of those ideas that she's had in her life she's just absolutely brought them to completion," De Souza says. "Everything she does is just amazing and colorful, and she's a painter and a hairdresser, and she's opened, like, five different restaurants, and she's opening a mini-golf course this spring, and she just recently opened an art gallery that's an artist residency space, where artists can live and work on their art, as well," De Souza says. "We're kindred spirits."

De Souza admits that it took some time for her to fully appreciate her mother's creativity and unabashed displays of uniqueness. She jokes that, yeah, she was pretty angry at her mom for a while because of the whole truck thing, especially because she owned another "normal" car she could've picked her up from school in. But it wasn't until she relocated to Asheville at 16 that she realized it was the small town that was weird, not her or her mom.

"I guess that's why I named the album I Love My Mom, because I wanted her to know how much I love her and how much I appreciate her," she says. "That's kind of more a recent thing, my being, like, very proud of her."

In the coming year, De Souza and her bandmates will wrap up some solo dates and embark on a brief jaunt supporting Chicago surf-pop outfit Beach Bunny next month. As for new music, that's coming, too, and as De Souza says, she's leaning into the possibility of less anxiety and embracing having weathered the storm. Of course, she's still learning and still feeling all at once.

"My songwriting has definitely changed a lot, but also it hasn't at all," she says. "I think that because I feel better ... I've definitely written some really, like, happy and empowering songs, which is a little different from I Love My Mom. I feel like most of those songs came from a place of severe pain, and now I feel like some of my songs that I've written for the new album have come from a place of hope, but I don't know."