It’s 6:30 p.m. GMT. Richie Hawtin (Plastikman being his studio persona) plugs in his dying cell phone just in time to explain a couple of things: He spent the whole weekend playing in Frankfurt before taking the train this morning to Cologne to go record shopping at the Kompakt store, and now he’s just landed from a delayed $60 Rhine-jumper to Berlin so he could sit in his new downtown apartment for the obligatory Detroit interview — it was important that he didn’t feel rushed for this one. Sounds relaxing (if you’re a fugitive), but that’s how he does. Having left our continent indefinitely, the Windsor native who began his ride into techno stardom more than a decade ago at the Shelter is now stationed within two hours of 80 percent of his yearly gigs.

“This weekend I played over 30 hours with Ricardo (Villalobos),” he explains in a surprisingly coherent tone. “Now I can run to the studio with the inspiration from that night instead of being jetlagged for three days, then trying to remember what the hell inspired me in the first place 72 hours ago.”

At 33, Hawtin’s living faster than ever. Apparently, he’s just trying to keep up with the voices in his head. His new album, Closer, is a Plastikman-guided (mutated vocals and all) tour de synapse through the back alleys of Hawtin’s psyche — it’s personal and brooding with continuously modulating stretches of confusion, clarity, indecision and release.

It’s 10 years since the first Plastikman effort, Sheet One, saw light. Everything was going Hawtin’s way back then; his career was taking off faster than he could get his shaved head around it, he had a girlfriend, he was living with his visual-artist younger brother in Windsor, both his Plus 8 label and its parties hit legendary status, and he had a cat called Spaz.

Suddenly it’s a decade later and he knows he’s going to mark the occasion with a Plastikman record. Things happen: his epic relationship with his girlfriend crashes, his bro splits for London, and his cat dies. His support network is fractured and it takes making a few uninspired tracks for Hawtin to realize something has to give. That is, if he’s going to measure up to his fans’ and his own expectations.

“I decided to move to New York,” he explains. “I had time to walk around the city and think about where I had come from and where I was at in my life. It’s a crazy life; it’s totally fast-paced and fucked-up. I’ve lost a lot of people along the way just because they couldn’t deal with me being in and out of their lives or the sheer pace at which I live.

“Some of my friends were saying that I was having an early midlife crisis,” he continues. “I stopped and took a couple of months to figure out what happened, who I’ve become, and where I wanted to go next. Sheet One had a lot of talk about being crazy, being on the edge, being in darkness, being alone … but this was the first time in my life that I felt I was really on the edge [laughs]. I wasn’t sure which way I was supposed to go personally, creatively or mentally.”

Something clicked and for the first time in more than a decade, Hawtin allowed his hair to grow. Some of his closer friends (and lackeys) who knew he was staying in, tethered to the studio, suspected something was up. The end result of his New York-then-back-to-Windsor-to-record phase is now the deepest-cutting album of his career.

Sheet One mostly defined the early ’90s acid zeal (the insert was even printed on dry blotter); Musik sealed down Plastikman as the bona fide superhero of the era of acronym dubs; then Consumed pulled the plug on the alien imagery thing and darkened it with the sparse bleeps and thumps of actual space. Yet Closer (which hits the stores Tuesday, Oct. 21), unlike the other full-lengths, demands both a patient mind and the mind of a patient. More than just a therapy session for Hawtin, it’s hypnosis for his audience that’s somewhere between Basic Channel, Pink Floyd and Plastikman (whoever that was/is). Lyrics that look trite in print (“My mind works in rewind/why was I so blind?”) are numbing in context; a haze of sounds spans a blurry chunk o’ years.

“The one thing that was really important — with the use of vocals especially — was that this record had to be saying exactly what was in my head,” he says. “I couldn’t put a wall up or pretend or do it half-assed.”

Hawtin conceived the album as a “running train of thought” that flows through the abstractions of thought processes into the uncertainties of a man at the crux of something big, only to conclude that each decision is just as imperfect as uncertainty itself (got it?). Still, every time you pick this puzzle apart, putting it back together becomes that much easier until the nuances of the recording are all you hear.

“I’m a product of our society and the technology age,” says Hawtin when asked about the album’s themes of disconnection. “My creativity is put forth through technology and I’m only able to get around the world by using other technologies. But as much as we think of technologies as connecting us, they also disconnect us. Sometimes we’re disconnected from our friends and from relationships and ourselves because we allow technology to rule our lives. How far can you use technology to connect to others when you’re disconnected in the first place?”

Hawtin’s comments and his album could easily sound pretentious, or worse, boring to anyone who doesn’t know that his music and words are simply a kind of robotic backlash to some precarious party benders. And without sounding pompous, Hawtin is an extremist, and he carries that intensity into the studio. No joke.

And with Closer, Hawtin’s hoping to fill a void he sees in electronic music lately. He thinks that electronic music’s become less introspective — a viewpoint that’s hard to argue in a time when chugga-chugga techno has all but dug its own grave as younger folk are busy pushing to out-weird the next geek’s laptop patches. Anyone expecting obvious studio innovation for its own sake probably won’t dig Closer.

But really, what always gave Detroit’s electronic sound backbone was when it didn’t bang-bang-bang, when it dug in deeper and didn’t shy from emotional turmoil.

“Out of anywhere in the world, there’s the highest number of people interested in electronic music here,” explains Hawtin of his move to Berlin. “There’s an energy here that totally reminds me of Detroit in 1988 and ’89.”

It wasn’t too long ago that Hawtin was the punk white kid from Windsor tryin’ to be all techno by dropping Nitzer Ebb over UR (Underground Resistance) tracks. Good or bad — and whatever the old guard of Detroit techno had to say about Hawtin — he was relentless, releasing his first record by his 20th birthday and always pushing things bigger, louder and darker.

“I’m looking for the me of 10 or 12 years ago to challenge me,” he blurts out. “I want that challenge and I totally welcome it. Not only am I craving that, but I thought that if I didn’t do it now, maybe 33 would be the point that I would stop craving the unknown, settle down somewhere and stop progressing as fast as I wanted to. For me, it was make or break. Fuck it. If I’m ever gonna move away over to the other side of the planet, now is the time. Home will always be there.”

In conversation with Hawtin, one gets the impression that this whole Plastikman persona was a phase, a cycle or a really long increment of a moment that’s passed and gone, a moment many people (in the Midwest especially) shared, but don’t necessarily need to relive — the parties, the confusion, the blind euphoria, the cop-dodging, and the what-the-hell-just-happened, early-morning stupors. It almost takes moving across the world to escape the echoes of that much reverie turned noise.

“I still want to create new moments,” he says emphatically, “and maybe something that would be good enough to be worth wanting to relive, but I really, really hate reminiscing too much.”

No kidding. Closer is the result of steadfast, honest reminiscing, but it’s only done so the hypnotized and the hypnotist can move forward … wherever that may be. 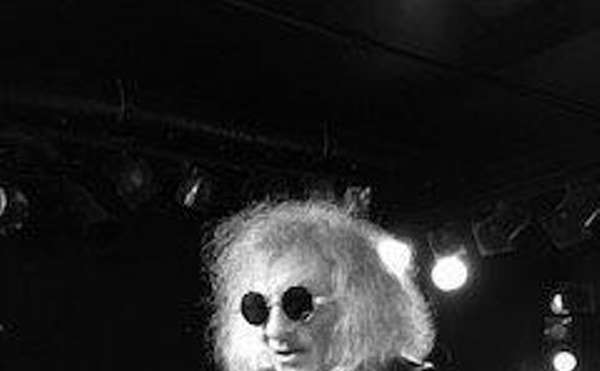