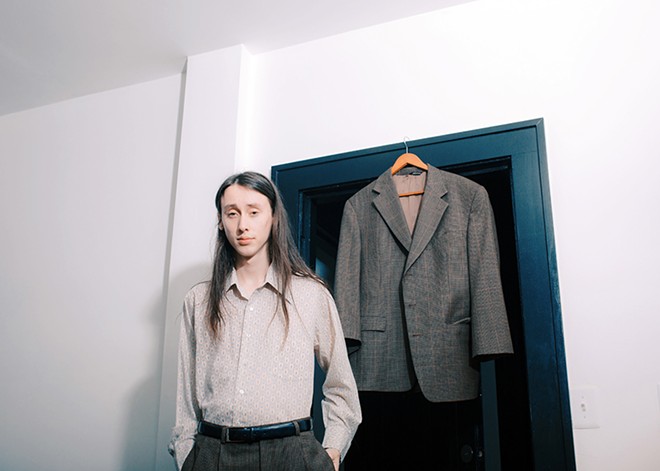 At 21 years old, Mark Whalen is an unapologetically huge Steely Dan fan, an admission most people might only make while in their therapist's office or in conversation with a clergy member.

"They're probably, like, one of my favorite bands of all time," Whalen says. "They write songs that are really out there or strange and sometimes not even enjoyable, yet blend it in a way that is, as a whole, enjoyable. The old joke is that Steely Dan has been giving jazz music to rock fans without them knowing it."

If you haven't guessed by now, Whalen is as far from a typical 21-year-old musician as you can get. He listens to a lot of Donald Byrd and El Michels Affairs, dreams of working with producers like Mike Dean and Mark Ronson, and he doesn't let the fact that he has 73,000 monthly Spotify listeners really get to him. In fact, he thinks the streaming giant is pretty evil and defines success as having health insurance and being able to pay his bills with music, if possible. You know, the new American Dream.

"Regardless of what I do, being the man or the guy has never really been something that I really wanted," Whalen says. "If it happens, it happens, and I won't fight it; that'll be cool. I'll also be happy if I have a decent-paying job where I can make money and have health insurance and have time to keep writing music," he says. "I'm gonna be making music pretty much forever."

The music he has made both solo and with his band the Buttermilk Boys is shimmering bedroom R&B reminiscent of Jason Schwartzman's Coconut Records, Lettuce, Ambrosia, and, yes, Steely Dan. (Hey, it's a compliment!) Whalen's tastes are an amalgamation of his musical upbringing, his independent exploration, and his extensive music education.

"I was born into a kind of musical environment," he says. "My mom is a really talented musician. She's classically trained in a bunch of different instruments. She plays the piano, violin, viola, the harp, the accordion. And my dad was also a musician. He was really into bluegrass music. So growing up from a young age, I took piano lessons and I was in orchestra. And they really pushed the music stuff — not in a forceful way. but they really took a lot of initiative to get me into music," he says. "And I gotta thank them for that."

After he joined orchestra in fifth grade, Whalen and his family went all-in on his musical aspirations, including securing a private instructor, which meant practicing on weekends and performing in orchestras in school and outside of it. As he migrated toward college, Whalen felt the natural next step was to go to school for music where he thought he'd try to land a major orchestra gig and work his way up. So he did — almost.

"I think it was exactly how I thought it was gonna go," Whalen says. "It was really super intensive. I had a really great private instructor in college, Larry Hutchinson, who was the principal bassist of the DSO for, like, 30 years. I loved taking lessons with him. I mean, he was a man who just knew so much, and it was so great to be able to pick his brain and learn from him. But it was also pretty intensive, and I found out pretty quickly, like, hey, this isn't what I want to spend the rest of my life doing," he says. "I have a lot of respect for people who devote their entire life to really just mastering either one instrument or, like, multiple instruments to do it at, like, the highest level possible."

The Wayne State University senior, who will wrap up his music technology degree by the fall, is working on his follow-up to 2018's Morning Glory — the culprit behind all of those Spotify streams. He's in no rush to get it out, but at the same time, Whalen says he's sort of behind, which seems very on-brand if you take a sonic stroll through Morning Glory, an album that would feel at home in a '70s roller rink, or in a foggy car parked at your hometown's makeout spot, or a movie montage where the main character is getting shit done but can't help getting distracted by persistent thoughts of a certain someone. In other words, Whalen's output is universally applicable and is like combining incense, coffee, and silk underwear — you know, like Tame Impala on CBD.

"Everyone writes music differently, but for me, sometimes it's a little backwards," Whalen says. "I love the feeling of, like, listening to new music and when something cuts in or something really grabs your attention or you're like, whoa, like, what's going on here? I really love that feeling of hearing something that's interesting, not to say interesting as in complex," he says. "So I think a lot of stuff on the new record comes from just trying to write cool arrangements and cool parts that I found and interesting that others can enjoy."