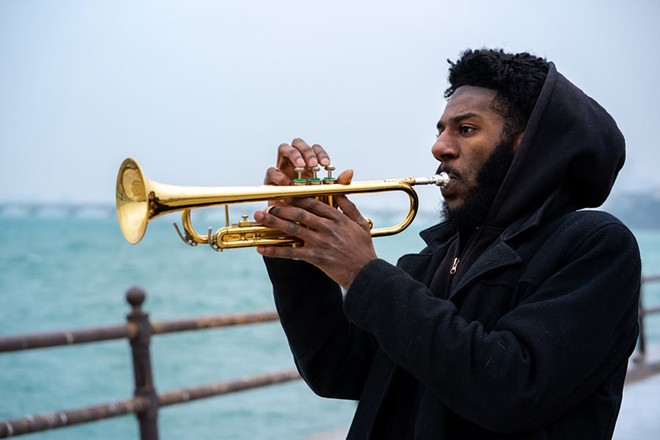 2Lanes collaborates with Jonah Baseball: After his breakthrough 12-inch single on Portage Garage Sounds (“Baby’s Born to Fish” backed with “Impish Desires”), underground favorite 2Lanes is wading into the physical realm again. This time it’s on his own Auto Shop label, with a four-track scorcher with fellow Detroit musician and DJ Jonah Baseball “recorded over many sessions during the past year,” according to the artist’s Bandcamp page. Per these two producers’ reputations, the EP runs the full gamut of sounds you’d expect to hear at the late-night gigs they typically play. The first singles offer thumping techno DJ tools, mid-tempo soulful house moments, and downtempo melodies for when the starts to come up. Other guest musicians include Ji Hoon (previously featured on 2Lanes’s “Impish Desires”) on saxophone, L.A.-based singer Jia Pet, and also Jonah’s father David Julian Gray lending clarinet to a track. The “Standing Waves” EP is released digitally on Dec. 5 via 2Lanes’s Bandcamp page (with three exclusive bonus tracks), with the physical vinyl arriving in shops worldwide soon after.

Vinny Moonshine ends eight-year hiatus: Kevin McGorey released his first cassette as alter-ego Vinny Moonshine in 2014, and quickly thereafter was unable to tour and support the album due to illness. That album Live at Waxwing (not actually a live album) went on to receive a late burst of critical acclaim, thanks in part to getting reissued in 2020 via Metaphysical Powers. Now, eight years after the debut, Vinny has emerged from the depths to give us Mass Extinction Fairy Tale, 12 cavernous tracks of his signature haunting vocals over blissed-out, dreamy loops. The new album offers the same gorgeously simple melodies fans loved on the debut, with a heavy dub influence that recalls some of the more skeletal songs Panda Bear might write. CD and digital versions of the album are available now via the Metaphysical Powers Bandcamp page, with a release show happening on Dec. 2 at Grey Area, an art gallery in southwest Detroit that has been hosting great DIY and punk concerts as of late (4200 W. Vernor Hwy., Detroit, greyareadetroit.com).

Wetdogg’s new video: On her latest video for “EMO SWINGSET,” a track inspired by a middle school diary entry, Wetdogg conjures pop styles both old and new and blends them into a sentimental and mysterious rumination on emotional uncertainty. Over a minimal club beat, complete with blown-out kicks and echoing percussive textures, Wetdogg’s voice twinkles sharply in a stark juxtaposition that somehow results in remarkable harmony. The video is charming as well, contrasting VHS-style shots of rollercoasters and swing sets with clips of the artist’s early-2000s inspired attire and an over-the-shoulder peek at the act of journaling, as if you’re trying to understand what the song is about as a concerned friend. Reminiscent of early work by fellow Detroit artist Tammy Lakkis, as well as some contemporary work by the likes of Hyd, “EMO SWINGSET” is an intriguing offering that primes the listener for more experimental offerings to come.

Allen Dennard’s debut album: One of the most prolific young jazz talents in the city of Detroit right now is Allen Dennard. As a frequent collaborator with a variety of artists, including Bruiser Brigade affiliates Gulley and Apropos as well as DeSean Jones, to name a few, it seems like Dennard always has something new to offer. Coming off of a stellar year where he performed with his band on the main stage at the 2022 Detroit Jazz Festival, Dennard has just released his debut album, Flashback, celebrating the occasion with a performance at the Detroit Symphony Orchestra’s Cube as well as at a show this past weekend at Motor City Wine. The record hit some delays through streaming services, but you can check out a selection of tracks via his SoundCloud page, and be sure to keep an eye out on his website and Instagram for updates on physical and digital distribution. Expect a crisp, refreshing take on contemporary jazz that soundtracks Dennard’s life as a trumpeter, composer, band leader, and activist.