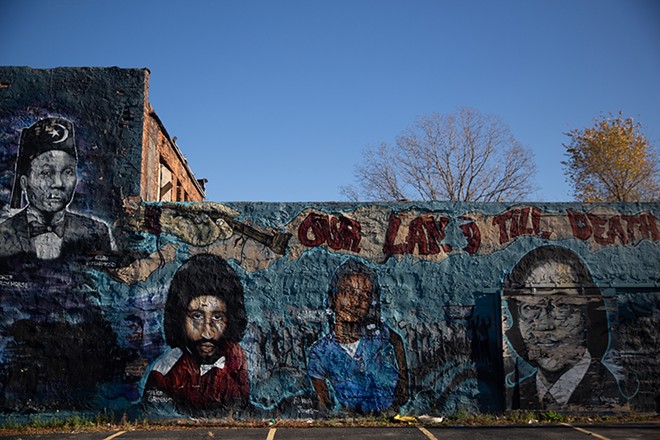 An iconic mural that pays homage to Detroiters who were victims of racist violence is slated for demolition next month as work continues on Allied Media Projects' new LOVE Building complex.

But street artist Sintex, who created the original "Our Land Till Death" mural at 4641 Grand River Ave., has been tapped by Allied Media Projects to not only re-create the mural but also update it for its new headquarters.

"It's cool that they want to actually re-create it," Sintex tells Metro Times. "Some of the murals come down, and they just come down. A lot of people remember them and have pictures of them, but it's cool when they can be re-created."

Allied Media Projects acquired 4641 and 4731 Grand River Avenue as part of its new LOVE Building, which will provide a home for the social justice-oriented nonprofit and its various partners. Construction on the project began in September and is expected to wrap up next year.

Sintex, who used to be a tenant in 4731, has done many other murals in the neighborhood. He originally painted "Our Land Till Death" in 2015, based on another mural he did in 2012 that was painted over by another street artist as part of a "graffiti war" along the corridor.

"I'll try to re-create the same emphasis on the message behind it," Sintex says. "And I'll probably just bring like a whole new feel to it."

The mural includes the likenesses of people killed by police violence, like Malice Green and Aiyana Stanley Jones, or racism, like Vincent Chin, as well as other figures from beyond Detroit like Crazy Horse. Sintex says he's thinking of adding figures like Malcolm X to the new version of the mural.

"As it stands now, it's such a powerful memorial and tribute to ancestors," Allied Media Projects executive director Jenny Lee tells Metro Times.

Lee says AMP has created an "Art & Archive Advisory Council" to work with Sintex on a redesign of the mural to incorporate other figures from the community. AMP will also work with the council for programming events in the LOVE Building's community center. 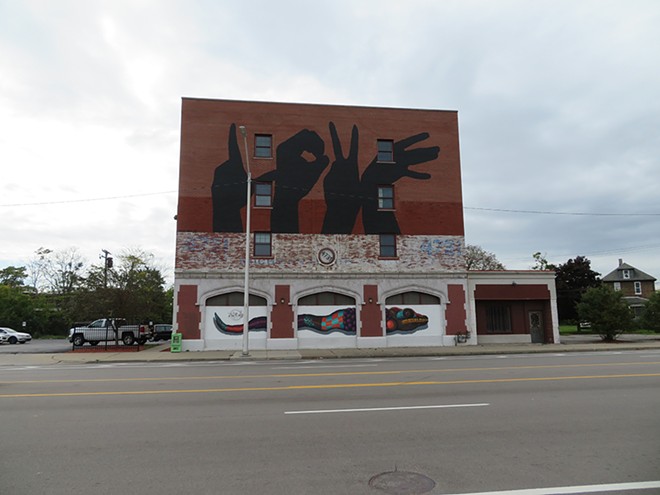 Designing Justice + Designing Spaces
4731 Grand River Ave., the future home of Allied Media Projects' new LOVE Building.
News that AMP was moving into the space that has long been a haven for artists who were now being displaced led to accusations that the social justice group had, ironically, become a force of gentrification in the neighborhood. But Lee says this is an inaccurate characterization; she says that AMP worked with the artists, allowing them to stay rent-free for several months while they found new studio space. And beyond the advisory council, AMP also has a community benefits agreement with the surrounding neighborhood to help make it a facility "truly for the community" in a way that its previous incarnation, as a hub for artist studios, hair salons, and tattoo parlors, was not.

Lee says AMP acquired the buildings because real estate was getting expensive in several of Detroit's other neighborhoods. "It was a moment in the Detroit real estate market where basically, if you didn't have a million dollars in cash, you weren't going to be successful in buying anything," she says. The two parcels on Grand River were for sale but had not yet hit the market yet.

Lee says shortly after AMP purchased the properties at 4641 and 4731 Grand River, they learned that 4641 was deemed a dangerous structure by the city and required demolition. She says initially AMP looked into ways of preserving and relocating the mural, but it just wasn't feasible. Not only was it expensive, but the mural might not even survive.

"We decided well, rather than invest $170,000 in something that might actually still crumble and not be safe, we were like, 'let's invest in recreation,'" she says.

Since 2011, AMP has been based in the former furniture factory in Midtown, where Cinema Detroit also resides. What is now AMP started about 20 years ago originally as a Midwest conference for alternative publishing, aka zines, in Bowling Green, Ohio. In 2002, it was incorporated into a nonprofit, and Lee came on around 2006 to relocate the organization to Detroit, where it took on more of a social justice bent, due to the influence of elders like the late Grace Lee Boggs. Lee became a co-executive director of AMP around 2010.

"I would say in the shift to Detroit, the conference and the organization became much more rooted in social justice movements," Lee says. There, it wasn't a big leap from alternative media to media-based organizing. "It really took on this tone of media as a tool for movement building," she says.

Today, AMP provides financial help for about 150 smaller organizations, including the Detroit Narrative Agency, a community organization dedicated to centering Detroit's story on a Black and Indigenous voices, and Detroit Community Technology Project, which has helped fight "digital redlining" by bringing internet connection to underserved communities. As part of that, AMP and DCT plan to provide WiFi hotspots to the surrounding community of the LOVE Building.

Other nonprofit allies that will be part of the LOVE Building include Detroit Justice Center, a community-oriented law practice, and Detroit Disability Power, an organization dedicated to making the city more inclusive for people with disabilities. Paradise Natural Foods, the brick-and-mortar location for AMP's longtime caterer, will also be part of the headquarters to provide a deli-style lunch options.

The current "Our Land Till Death" mural is now slated for demolition during the week of Dec. 7. Sintex hopes to start painting his new mural, which will be located on the north wall of 4731 Grand River, by the spring.