DARK SIDE OF THE KIELBASA!

The ever-popular Polish Muslims will be one of the headliners at this weekend's 27th annual Hamtramck Festival, which kicks off Friday night at 6 p.m. and runs through Labor Day until 10 p.m., and will spotlight an assortment of music on two separate stages. The last time the Muslims performed, several weeks ago in Oakland County, the gig featured an appearance by former Motor City Mutants multi-instrumentalist Pasadena, so maybe there'll be a repeat performance this Friday night. Also on the bill is a Muslims spinoff, fronted by Dave Uchalik, called the Earworms, which plays Friday at 6:30 p.m. The headliner that night will be Rare Earth, one of the few white rock bands signed to Berry's Motown back in the day which had several Top 40 hits with rockist remakes of Temptations tracks, including "Get Ready" and "(I Know) I'm Losing You" (Rod Stewart was apparently paying attention). Powertrain also plays Friday night. Saturday's festivities are headlined by those great Polish Americans, Question Mark & the Mysterians (or good ol' Rudy Martinez, originally from Saginaw, Michigan, and later "from Mars," as Rudy himself has often proclaimed) of "96 Tears" fame. That would be the very first band ever to have the word "punk rock" applied to them, courtesy of one Dave Marsh in CREEM Magazine. Local rocker Danny D opens for the motley crew. Sunday is dedicated to Polish Palooza, with the Muslims headlining a slew of local polka bands. The night will also feature a "Polka with the Stars" contest and the famous pierogi-eating contest. The annual Polish Day Parade kicks off Monday at 1 p.m., with Polka Floyd (which performs Pink Floyd classics in a polka fashion) as the musical headliners that evening, with several other local rock acts also set to perform.

For more info and a full schedule, go here. 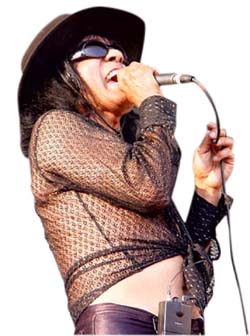 Question Mark: the most famous Polish-American from Mars?