Well, at least according to a few writers and editors in Boston, they are...

For the second year in a row, alternative weekly the Boston Phoenix has picked the "best new band" in each of the 50 states. And according to this year's poll, Detroit's own Child Bite is "the best new band in the state of Michigan" (those of us who actually live in Michigan don't exactly think of the bearded wonders as "new," of course...but, hey, maybe they're "new" if you live and write in Boston...)

Here's what the newspaper has to say about our local champs:

SONG THAT GOT US: “Never Ending Mountain Slammer”

ON THE TUBES: MySpace, Web site

WHY THEM? Rare is the no-wave band that sends you home with a big smile and a few hooks to remember them by. Sure, there’s the sly funk and manic yelps while guitars limp through inadvisable harmonies and splat off-key chords. But just when you think you’re not gonna make any friends at this show, Detroit’s Child Bite toss you a rope with a triumphant sing-along chorus from a Madness throwaway or the cruising shards of a hair-metal anthem. Lore goes that their songs are cobbled together from recorded bits of unwieldy jam sessions on Shawn Knight’s computer, and then re-learned as though they were, well, actual songs. This goes a long way toward explaining Child Bite’s unique damage, which goes way farther than art.

Go here to check it out. And click here to read the bands named for each of the other 49 states. 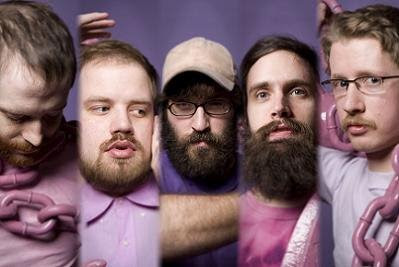