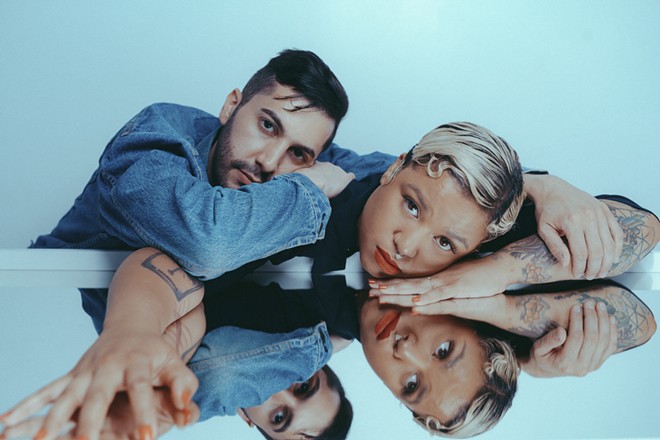 Drama — not to be confused with the British rock band, or, for that matter, the 1980s Norwegian boy band, or the ’90s rapper, or the DJ, all of the same name — is sort of blowing up and has been selling out tour dates left and right. (Talk about drama, eh?)

Since 2014, Chicago-based producer Na’el Shehade and vocalist Via Rosa have discovered new ways to pair contemporary R&B with soft dance-pop. On Dance Without Me, Drama’s first release on Ghostly International and the follow-up to their 2016 independently released debut, Gallows, the duo channels, like, Sarah McLachlan circa Brokedown Palace soundtrack with some bright, crying-at-the-club new-wave-tinged electronica.

Rosa, a Texas native who grew up surrounded by Afrobeats (her parents were in a touring reggae band) teamed up with Chicago-born Shehade, who has worked in the studio with Chance the Rapper, Kanye West, as well as on projects for MTV and Bravo, in 2014. Chicago rapper and prison abolitionist Ric Wilson, who was voted one of the best live performances in 2019 by Chicago Tribune, will also perform.