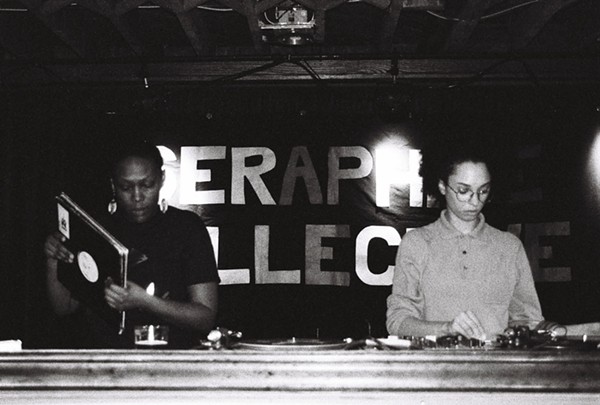 Seraphine Collective in action. Courtesy photo.
We’re big fans of feminist group Seraphine Collective at the Metro Times — their music festival, BFF Fest, now in its fourth year, is a highlight of the end of summer in the city, and Seraphine-affiliated post-punk band Casual Sweetheart graced the cover of this year’s annual winter issue, in which we chose them as a 2017 Band to Watch.


Seraphine Collective recently became Knight Arts Grant Challenge finalists, but the catch is that they must match the funds they were awarded ($15,000) in order to receive them — so they have been feverishly fundraising since winning, and will continue to do so until the Halloween deadline. (Current estimates would place them about halfway there!)

The collective is always hard at work booking and promoting shows that feature underrepresented musicians, but their work has become even more expansive with the first Beat Match Brunch Workshop that was held last year. Diana Nucera, who you may know as DJ and electro-soul performer Mother Cyborg (find out more about her in our interview earlier this year) taught the 4-week course focused on teaching female-identified people how to DJ.

Sophia Softky and Nandi Comer (also known respectively as the DJs Beige and (____) STACKS) are two women who took the original course; both had life-changing experiences, and now are extra hard at work fundraising to make sure they match the funds, on top of their day jobs and other creative pursuits!

Support their efforts this weekend by attending Beat Match Benefit Brunch + Afterparty at Bank Suey in Hamtramck on Sunday, June 4. Doors are at 11am and the event is planned to go until 8 p.m., with a free after-party to follow at Trixie’s. Tickets are $75 each and include brunch, beverages, and entertainment. Paid reservations are required, and tickets will be available right up until Sunday.

The Knight Arts Challenge win is directly to support future iterations of the Beat Match Brunch Workshop, which provides affordable and accessible means for women/femme/non-binary aspiring DJs to learn the foundations of record mixing on quality gear, in a supportive, low-pressure, and collaborative environment. Seraphine estimates that funding will provide for at least three full sessions, although they have high hopes that with the equipment and space made possible through the grant funds, the program will be self-sustaining for years to come.

We should add, however, that the workshops will happen even if the fund matching is not met; the program will just be that much easier to permanently maintain if they do ultimately receive the funds.

We support diversity in music and art, at all levels, and really think you should too, which is why we strongly urge you to attend the Benefit Brunch at Bank Suey. If you can’t make it to the brunch, consider checking out the after party at Trixie’s.

Seraphine has plans to launch a GoFundMe at some point soon to collect donations to help match the grant funds, but for now the best place to make a one-time or sustaining donation to Seraphine/the Knight match is here, at Allied Media’s website. If you can’t make it to either event, consider giving them some cash-love online!

In addition to the Benefit Brunch, you can also catch more Seraphine-supported music at the Get Down, Stay Ready event at Marble Bar on June 16, a night of music collaboratively co-presented by the Seraphine Collective and Sterling Toles, an Eastside-bred, Cass-Corridor-educated Detroiter who views himself as a healer with sound. The party coincides with the 19th annual Allied Media Conference, and entry is free to registered AMC participants.

Last, but most assuredly not least, Sofky and Comer are also going to be kicking off a new monthly DJ brunch series at UFO Factory. “It will be semi-open, bring-your-own-records for women, femmes, non-binary, and gender-nonconforming folks,” Softky tells us. The first one will be kicking off Sunday June 11th — be there or be square!

Seraphine Collective in action. Courtesy photo.
Some food for thought as to the importance of all of this is the fact that women make up 51% of electronic music festival attendees, but less than 10% of bookings. (Movement has never had a female headliner that we are aware of, and women have never made up more than roughly 3% of performers.)

If you think that should change — and we really hope you do — come out to the Beat Match Benefit Brunch + After Party this weekend, check out Softky and Comer’s new semi-open DJ brunch at UFO, and follow Seraphine for all the latest shows and events that feature female/non-gender-conforming DJs, performers, and artists of all kinds.

See you on the dance floor!

Third-annual BFF Fest aims to show its 'Softer Side'