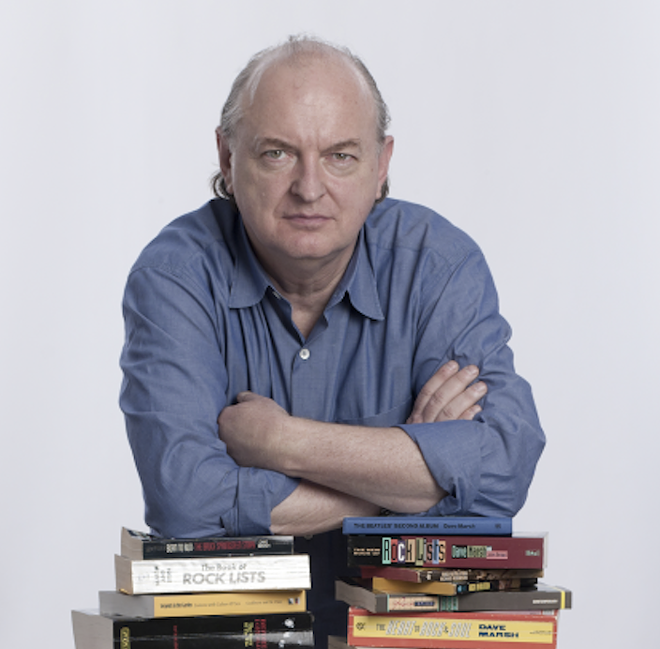 Courtesy of Land of Hope and Dreams: A Celebration of Dave Marsh's Work and Vision
Creem magazine co-founder Dave Marsh will be honored during three-week virtual celebration.

When “The Boss” shows up you know shit is serious, and by serious we mean seriously rock 'n' roll, because Bruce Springsteen is just one of several notable names coming together to celebrate pioneering music writer — and Detroit native — Dave Marsh.

Marsh, 71, the celebrated activist, author, and founding member of Creem magazine — who may have coined the term "punk rock," who absolutely played the Who's "I Can't Explain" 23 times in a row during his stint at a college radio station (which got him fired), called drummer John Bonham Led Zeppelin's “insurmountable flaw,” and dared to describe Freddie Mercury's voice as being “passable” — is the honoree at the upcoming “Land of Hope and Dreams: A Celebration of Dave Marsh's Work and Vision” conference.

“Dave has always been a tireless advocate of justice, human rights, and rock n roll,” Rage Against The Machine's Tom Morello has said of Marsh. “His pen and voice are an important player in the history of the music we love and the struggle for a more just and decent world.”

The three-week virtual conference, which will take place throughout the weekends April 30-May 15, invites musicians, writers, and political activists to celebrate Marsh through a series of pre-recorded performances, Zoom-based panel discussions exploring the origins of rock writing, activism in music, the art of listening, and music education, as well as intimate spotlight conversations, including one between Marsh and writer Daniel Wolff on Friday, May 14, which will be simulcast on the Rock & Roll Hall of Fame's YouTube channel.


The celebration kicks off at 8:30 p.m. on April 30 (which just so happens to fall on the 39th anniversary of famed rock critic Lester Bangs' death) with a discussion between retired rock critic Jon Landau (who was the first editor to publish Marsh's work in Rolling Stone, by the way) and music writer, archivist, and Patti Smith expert Caryn Rose (she's currently writing Why Patti Smith Matters, which we will absolutely be reading).

Anyway, on May 6, Little Steven and Jackson Browne will chat with Rock & Rap Confidential associate editor Danny Alexander and on May 8, Bruce Springsteen and Nona Hendryx will join in conversation with senior director of music at NPR in Washington, D.C., Lauren Onkey. Onkey will also host a keynote panel focused on the pressures of rock criticism featuring music and culture writers Robert Christgau, Greil Marcus, Ann Powers, and Greg Tate.

Naturally, there is a Detroit-focused panel, too, which will explore the impact on music and rock journalism moderated by author Peter Werbe and will include MC5's Wayne Kramer, activist John Sinclair, and writer and labor activist Marsha Music.

Though registering for any or all of Land of Hope and Dreams virtual events is free, organizers urge donations to support The Kristen Ann Carr Fund, which honors Marsh's late daughter by raising funds for sarcoma research.

To register for programs, view the full schedule and list of speakers, as well as some thoughtfully curated reading list to accompany each discussion, visit landofhopeanddreams.co.