Break my own heart. 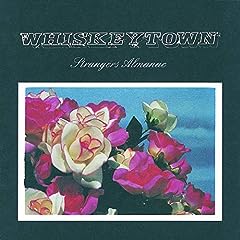 I don't know what prompted it, but this morning on the way out of my house I grabbed Whiskeytown's Stranger's Almanac off the shelf, a record I hadn't listened to or even thought about much since 1998 or so. Maybe it's the weather outside, as every day wilts closer to autumn and the crinkly burnt-sienna leaves look so great against the brilliant blue and white of the sky. Whatever I was thinking, Almanac sounds perfect this morning.

Maybe it's latent respect for Ryan Adams. Dude's off the deep end these days - you can't listen to his music without deciding first whether or not he's an asshole, and thanks to a bumpy run of live shows that found him acting like a petulant runt ("Hey! I'm gonna play the same cover song...twice!")and a glut of releases that could've benefited from an editor, he's at a point where we forget what he's always been capable of.

Which is great songs, of course. And on Almanac anyway, those are "Inn Town," "Houses on the Hill," and the "Dead Flowers" nod "Dancing With the Women at the Bar." Songs that hew close to the vest influence-wise, but still ring with something true, and the crispness of an autumn morning.

Not too bad for a Tuesday.