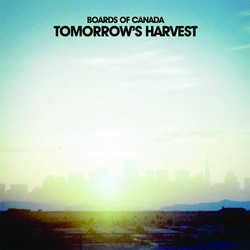 Boards of Canada rmake inhumanness intriguing. A pair of Scottish brothers who are a little leery of the limelight, they’ve spent almost two decades mastering electronica — a murky umbrella of music genres. Their music is trippy, as the two have fun with ethereal samples from obscure educational films and never shy away from droning out airy synth hums or bending their tones toward the eerie, ominous, even the creepy.

Like a half-remembered dream, just provocative enough to keep you thinking, just unsettling enough to grab you, their songs sound just fuzzy enough to flit away as the album plays out, (“Come to Dust” is a telling song title in this regard). Despite the lack of  earworm melodies or hooks, the music can hold you: the indelible beats, the spacey bass grooves, the warbling synths. Like a dream (ambient music often qualifies as “dreamy”), you also can’t discern its meaning.

The duo’s “image” and “aesthetic” is, by design, amorphous, so Tomorrow’s Harvest, like almost any previous Boards of Canada release, is free from certain expectations. The best part about the album is that it sounds like music that doesn’t seem to care whether you like it (or even get it).