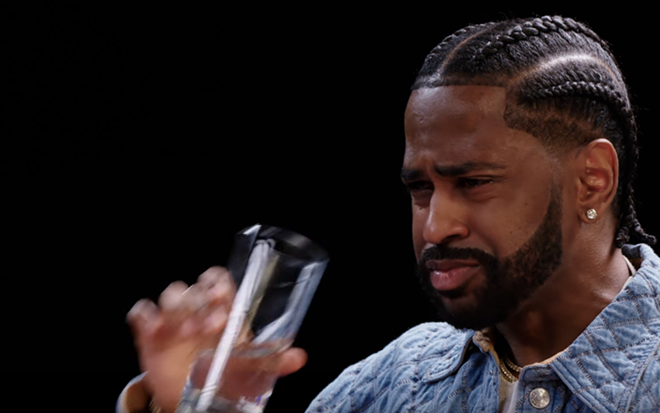 Let's hope Detroit rapper Big Sean — and his mouth — can “Bounce Back” after his appearance on the latest episode of the internet's spiciest and most expertly edited show, Hot Ones.

For the uninitiated, a typical episode of Hot Ones goes a little something like this: Hot Ones' esteemed host who happens to have a mouth of steel, Sean Evans, poses a series of well-researched questions to some major celebs, which have included Charlize Theron, Gordon Ramsey, Idris Elba, and spicy daddy Jeff Goldblum. Simple, right? Well, not quite.

Each guest is then tasked with answering the question while taking on a chicken wing slathered in increasingly spicy hot sauce — and not just your run of the mill Frank's Red Hot, either. We're talking hot sauces that are off the charts on the Scoville scale. Sauces that have names like Ghost-reaper, Widow Maker, and, like, fucking Chocolate Plague. Anyway, with each hot question comes an even hotter wing, concluding with what Evans' refers to as “the Last Dab” which clocks in at 3.3 million Scoville Heat Units.

As you can imagine, what starts out as a totally normal interview reduces renowned and respected celebs into drooling, snot-filled, expletive-hurling, milk-chugging puddles of disoriented gibberish as they attempt to maintain some semblance of sanity and control while their mouths — and gastrointestinal systems — are engulfed in lava.

Now that you're all caught up, Evans and the Hot Ones crew flew out to Detroit to grill telemarketer-turned-Grammy Award-winning rapper-in-hiding Big Sean on everything from Detroit's beloved Sweetwater Tavern — which Big Sean praises for having the best wings in town — to Coachella coronavirus concerns, Carhartt, Sada Baby, and that time Elton John called on the “Blessings” rapper's birthday to dole out some soul-searching wisdom.

Big Sean, who was slated to perform at this year's now-postponed Coachella music festival, is disappointed but understanding.

“I was definitely looking forward to Coachella being now,” he says. “I was very excited for that, (but) I understand, you gotta be safe.” He also says he's been “wiping down” his seats on planes and has been a “germaphobe” long before coronavirus struck the U.S.

Perhaps the most telling moment of the entire interview is when Evans asks Big Sean why he thinks Detroit “consistently punches outside of its weight class when it comes to lyrically-inclined rappers” like Eminem and Royce da 5'9''.

Big Sean, amid a sweaty, teary-eyed, spice-induced coughing fit, says it's simple: “Because ... it's Detroit. You know? I need some tissues.”

Clearly, in distress, Big Sean takes advantage of a merciful dairy-packed lifeline offered to him: yogurt.

Is it enough to save him?

Watch the latest episode of Hot Ones with Big Sean below.