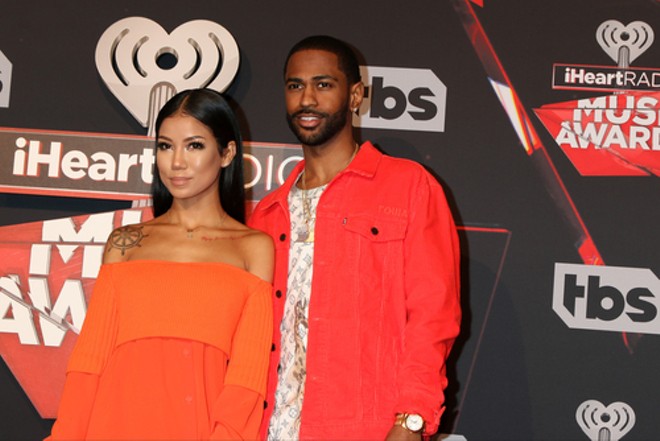 On Monday night, Big Sean was a trending topic on Twitter amid rumors the rapper and his girlfriend Jhené Aiko had broken up after Sean was allegedly spotted canoodling with another woman — but the two quickly took to their own Twitter accounts to deny the rumors.

The rumors started when a website called The Jasmine Brand published an anonymous report alleging that Sean was spotted getting physical with former Pussycat Doll Nicole Scherzinger at an Oscars afterparty. According to the source, no cameras were allowed at the party, but word had still somehow gotten to Aiko, who was reportedly "livid." Presented as proof was the fact that Aiko had apparently stopped following Sean on Instagram.

The alleged infidelity was made all the more tragic since Aiko got Big Sean's face tattooed onto her arm last year.


Art is ❤️thanks Jheńe for allowing me to share this moment.

Goodnight to everybody except Big Sean for cheating on Jhene Aiko


Big Sean had a fine, freak, faithful woman and he cheated on her. On behalf of the faithful black men association I apologize and we have revoked Big Sean’s membership.


However, shortly after midnight Aiko took to Twitter to swiftly and coolly dispel the rumors.

sorry, but nothing about you guy's fan fiction stories are true... I still love you tho 😘


Aiko then pretty much summed up the entire problem with our civilization:

the internet is a wild place 🤣 it's a whole other reality. bless the internet. amen.


So everyone please chill out, OK? Remember not to believe everything you read on the internet. In fact, this whole episode is a good example of why social media's "trending topics" are bad.