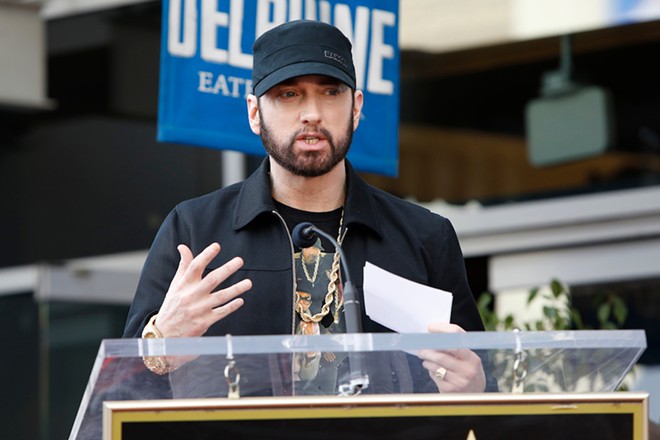 The age-old question persists: where would we be without Eminem?

Apparently, we're not alone in pondering a drab explicative-free existence, one in which “diapers” does not comfortably rhyme with “Mekhi Phifer,” because the Detroit rapper's 2002 fame-fueled celebrity diss track “Without Me” just reached a major milestone.

As of Tuesday, “Without Me” surpassed 1 billion views on YouTube. To celebrate, Eminem and company have released a high-definition remaster of the Grammy Award-winning visual which paints Eminem and collaborator Dr. Dre as superheroes sent to save us from ourselves and the musical stylings of Moby and Limp Bizkit. Oh, and Dick Cheney, because fuck Dick Cheney.

This isn't the first time the 48-year-old has smashed 1 billion views/streams. Last month, his Academy Award-winning biographical opus “Lose Yourself” became the first hip-hop song from the 2000s to surpass 1 billion streams and, in February, 2013's “Rap God” — which landed Em in the Guinness Book of World Records for the most words in a hit single with 1,560 words in six minutes — also hit 1 billion views on YouTube.


The Eminem Show, home to hits like “Without Me,” “Cleanin' Out My Closet,” and “'Till I Collapse” — which is nearing 1 billion streams on Spotify with 920 million as of last month — is also a show-stopper, as it was 2002's best-selling record worldwide and broke records for sticking it out at No. 1 for five consecutive weeks. It remains one of the best-selling records of all time with more than 27 million copies sold.

Em, if living without you is wrong, we don't want to be right.