ALL IN THE FAMILY...OR WEDDING BELL ROCK

Congratulations to regular Metro Times music contributor Brett Callwood and Toni Deville (aka Toni Jedlowski), who's one of the stalwarts across the hall in the MT sales/ad department. The happy couple tied the knot in downtown Detroit this past Sunday, May 24th, in a ceremony that was officiated over by L.A. punk hero and producer Geza X.

British expatriate Brett first met Toni when he was over here doing research and interviews for his MC5 book (which was recently picked up by Wayne State University Press). We've heard it was love at first sight...and now the poor chap is trapped. Just kidding...Actually, he's one the biggest champions of Detroit itself this city currently has.

This was such an important union to some folks that MC5 drummer Dennis "Machine Gun" Thompson also wrote about it on his website last week. (The drummer's website is indeed worth checking out, btw. Not just for some of the classic punk and Detroit music streaming there but also for lot of funny random comments, including this fave from his list of pet peeves: "People that talk shit on the Internet; where I'm from if you said half the shit to folks to their face as you do on the Internet, you would get smacked a few times over again.")

Anyway, again, here's wishing many good years together to the happy husband and wife. 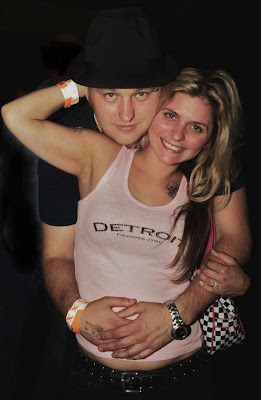