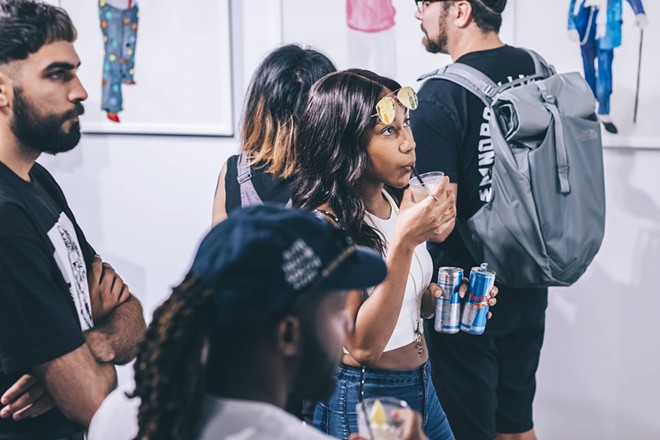 Joe Gall / Red Bull Content Pool
So long, and thanks for all the Red Bull.

But before it closes, the gallery, formerly known as the Red Bull House of Arts, will host one final art exhibition with an opening reception on Friday — and refreshments provided by its corporate sponsor, of course.

According to Red Bull Arts Detroit's Jes Allie, the building is now under new ownership, and Red Bull decided to end its lease agreement.

It doesn't mean Red Bull's presence in Detroit's arts scene is over, though.

"With our lease being up, basically, we decided to no longer have the physical space, and then to kind of use that as an opportunity to do more things within various creative communities throughout Detroit," Allie tells Metro Times.

That means it's ending its artist residency program and giving away all of its equipment, which includes a recording studio and woodshop, to local organizations. According to Allie, Red Bull is set to partner with other groups like Art Mile, Bulk Space, Museum of Contemporary Art Detroit (MOCAD), and Underground Resistance.

"I think with this space closing, the idea is, how can we continue to invest in Detroit, as opposed to just taking all your resources with you, and Red Bull doesn't really doesn't want to do that," Allie says.

The energy drink company has held many events in Detroit throughout the years, including sponsoring a stage at the annual Movement electronic music festival and hosting various sporting events.

"It's one of those things where everything kind of fell together in the most magical way," Allie says. "I have known and worked with [these artists] for a number of years."

Allie says to her, the final exhibition is bittersweet.

"I think the physical space has been something like a pillar in the creative arts community here, and we're definitely sad to close our doors," she says. "But at the same time, it's really giving us an opportunity to leverage the impact that Red Bull can have at a more grassroots level, to support other organizations and do exhibitions supporting more local artists."

Monolith has an opening reception from 5-9 p.m. at Red Bull Arts Detroit; 1551 Winder St., Detroit; redbullarts.com/detroit. The show is on view through Nov. 5.