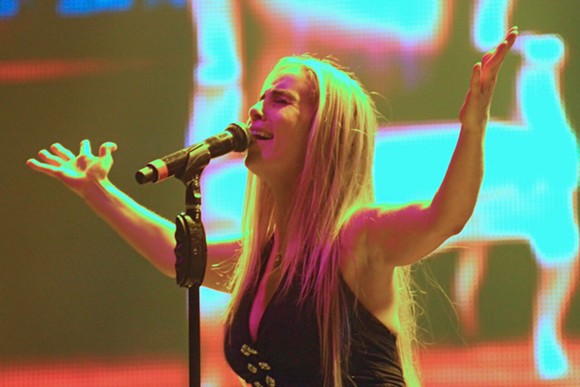 Photo by Samantha Fryberger
“We have stuff everywhere,” says Adam Lind, the self-proclaimed “guy who’s responsible for everything that goes wrong.” Lind heads up Night Castle Management, the firm that handles all of Trans-Siberian Orchestra’s “artistic endeavors.” He makes the remark as he walks through the cluttered hallways of Mid-America Center in Council Bluffs, Iowa, a small town just across a bridge from Omaha where the prog rock band rehearses each year in preparation for its annual winter tour. To say TSO has taken over the venue would be an understatement.

At the arena’s entrance there’s a table full of old, brightly colored crew T-shirts from nearly two decades of touring. They’re spread out on a table, free for the taking. One bright orange T-shirt displays the logo for 2012’s “Beethoven’s Last Night” tour — a drawing of Beethoven with disheveled hair — and a purple shirt features an image of a fire-breathing dragon and an electric guitar. A plastic gargoyle stands watch in a hallway as members of the crew whirr by on Segways and electric scooters.

You can hear wailing guitars and operatic vocals emanating from behind the closed arena doors as the band practices tunes such as “What Child is This?” and “Music Box Blues.” Inside those doors, roadies walk the empty arena floor while carrying open laptops. A giant pyramid-like contraption sits under a black tarp as if it’s a modern-day Batmobile, ready to shock and awe once the tarp comes off.

On the back loading dock, forklifts bring in the heavy equipment, and somewhere in the arena’s bowels, a crew works at cutting sheet metal and drilling the gigantic metallic structures that hold the array of lights and pyrotechnical gear together. A rehearsal stage for the East Coast version of the tour sits on one side of the arena floor while a stage for the West Coast version of the tour has been erected on the other end of the arena floor. The reason for the two stages is simple: TSO’s concerts have become so gigantic that they require two incarnations.

“The rehearsal process is the hardest part of the whole tour,” admits raspy-voiced backing singer Kayla Reeves, who joined the group six years when she was only 17 years old. “Once we’re on the road, it’s like Ground Hog Day [because band members wake up day after day to the same reality], and everything is second nature. Picture an iceberg. The top of it is just barely sticking out. Underneath it you have this huge chunk of ice. That’s like rehearsal. The show is the little top above the water. Every year, [show creator] Paul [O’Neill] keeps putting more and more chips on the table. I remember how overwhelmed I was the first year I came into the arena and saw the two stages. I’ve never seen anything like it. Every year, I’m just blown away. Paul never ceases to turn it up a notch.”

For the past seven years, the group has rehearsed in this small, centrally located town that puts the East and West Coast versions of the tour in prime launching position. A fleet of trucks and tour buses are already positioned in the arena’s parking lot. Soon, they’ll roll out and haul crew and gear across the country for the next eight weeks to bring the biggest, baddest, most over-the-top and extravagant Christmas rock show you’ll ever see to an arena near you.

Paul O’Neill: A Man of Letters

When he was young, O’Neill, the group’s mastermind, had trouble reading anything more sophisticated than Cat in the Hat. In the first grade, he was in danger of falling behind. But then his mother spent a summer teaching him phonetics, and the floodgates opened as O’Neill, whose parents forbid him to watch TV, started devouring the books around the family’s home. Now, he easily recites facts from European history and quotes Cicero.

As he was learning to play guitar, he went to see the Who perform at Madison Square Garden in the late ’60s, something he describes as a pivotal moment.

“The Who were the only band that I walked out on because they were so good I couldn’t stand watching them,” says O’Neill, who, with his black leather jacket, dark Italian sunglasses, speckled gray beard and shoulder length hair, looks like a cross between a member of the Ramones and a Lord of the Rings wizard. His dressing room includes a keyboard, two guitars and a KISS-themed pinball machine. For guests, the room also contains a few cases of Trans-Siberian swag — a stack of denim jackets with the TSO emblem on the back and CDs of the band’s new album, Letters from the Labyrinth. He gives the stuff away at such a rapid pace, the cases have to regularly be replenished.

“[The Who] were so good, I was about to throw up,” he continues. “I walked around New York City really depressed for about two hours. To me, the Who were the ones who invented the rock opera. When I first heard ‘Pinball Wizard’ on the radio, I thought, ‘Whoa!’ When I heard it on the album Tommy, it was a whole different thing.”

Later, as he toured with Aerosmith in the ’70s, he started collecting letters and developing his esoteric sense of the world. He has every letter from Thomas Edison. He bought the letters through the auction house Christies and at various estate sales.

“I have every letter from Thomas Edison to his tool and die guy about how to build the first record player — I have every single one,” he says. “I have a lot of letters from Lincoln, from Churchill, from Oscar Wilde, because when you’re holding letters that Lincoln held, that Churchill held, that Robert Lewis Stevenson wrote when he was a teenager, you feel a connection. Like I tell my daughter, we don’t own these, we’re just the caretakers of them for the next generation.
I have one letter from George Washington to Thomas Jefferson, from December 1779. He thought he was going to lose
the war. It’s fascinating stuff.”

Those literary sensibilities would inform the prog band Savatage, which originally recorded “Christmas Eve Sarajevo 12/24” in 1995. The song would reappear on TSO’s debut, 1996’s Christmas Eve and Other Stories, and launch the band into the behemoth that it is today.

“Me, Paul O’Neill, Jon Oliva and Bob Kinkel got together at what we called the kitchen table in Paul’s apartment,” says the slender, long-haired Pitrelli from his dressing room where he’s plastered a sticker that reads “roadie for life” on a black case full of clothes and gear. “We would throw ideas in the middle of the table, literally and figuratively. We were just having fun. We didn’t think it would ever sell. Who the hell would buy a Christmas record by a bunch of long hairs from Queens? Don’t ever tell the bumblebee it can’t fly. It was really that simple.”