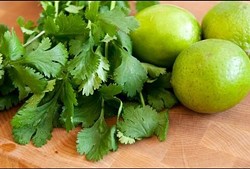 Walk down Grand River toward Harmonie Park, just past Broadway, and you might just miss the strip of pocket eateries that are tucked into itsy, bitsy storefronts, with little more advertising than a sandwich board out front.

Among those is the months-old Cilantro Bistro, a husband and wife set up that specializes in healthful lunchtime options like paninis, wraps, soups and smoothies - all made with halal ingredients, with an emphasis on veggie-friendly options.

The space is so small you'd be lucky to fit more than two or three small tables of diners in at one time. There's no formal kitchen, instead the prep space is made up of a series of hotplates and a panini press. But what comes out of that press is something special. Already a fan favorite is the Cubano panini, made up of thinly-sliced chicken breast, bacon sauteed red onions and a ghost pepper mayo. Another crowd pleaser is the creamy, roasted corn chowder, which owners Elihu Muhammad and Huda Ford were eager to share samples of on a recent spring afternoon.

The cafe is among a growing number of leaner lunch options in downtown, including Chickpea in the D at Grand River, off Woodward, Steve's Detroit Deli next door to Cilantro and 7 Greens Salads on Library Street - all of which encourage office workers to venture out of their high rises and enjoy the changing downtown landscape. Of all the consequences of gentrification, quick, healthy dining options like these are fast becoming welcome alternatives to the greasy spoon Coney's that have dominated the lunch scene for generations.