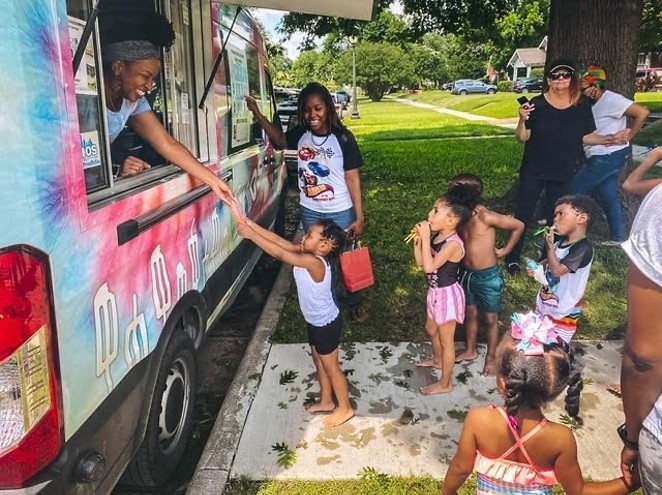 Cold, juicy popsicles are a perfect treat on sizzling summer days, but Karen Hudson can sell them out of her colorful van year-round.

“I thought, what better way to do that than by owning a business built on giving back through popsicles?” she says. “It’s important for me to help better the community I serve, along with becoming connected to people that I might not normally get a chance to connect with, and hear their stories. Being able to give back is a great way to build new connections and share love and respect for one another.”

Hudson has been involved in dessert food trucks since 2011. She is also a co-owner of the Detroit Mini Donut truck.

“Once I tried Frios, I was wowed by the flavor and knew I had to bring it to Detroit,” she says. “I knew my customers would love them.”

Hudson calls herself a “Happiness Hustler.”

“A Happiness Hustler is what we call the owner of a Frios Gourmet Pops business,” she says. “The reasoning is that we’re not only serving up delicious popsicles, but we’re also serving up smiles and sticky fingers and spreading joy across all the communities we serve.”

She adds, “I love my job and every part of it because no one is ever sad when they see me. I’m known as the ‘popsicle girl.’”

The business model is a freezer inside of a tie-dye-colored van. From there, Hudson is able to order the pre-made gourmet pops that she thinks her community would like, and serves them up at events throughout the Detroit area.

Frios offers its popsicles in a variety of flavors, from signature pops like fruit punch and pink lemonade to seasonal pops like chocolate peanut butter and even pickle. Frio also offers vegan, gluten-free, and dairy-free ice pops.

“It’s an ongoing joke that the Blueberry Cheesecake popsicle could end a small war because of how good it is,” she says.

She says one her personal favorites is the Caramel Sea Salt. “It’s amazing how the company works to create popsicles that [mimic] the tastes of desserts, fruits, candy bars, and so much more,” Hudson says.

She adds, “We have an incredible product that tastes amazing, but it’s mostly about the emotions the pops evoke. Frios brings out the nostalgic feeling of being a kid again, and allows people to experience happiness, even if it’s just for a few minutes.”

Although Hudson says sales have been successful, she says her biggest challenge is that she can’t be everywhere at once.

“There is only one of me, and I know the potential to sell to so many guests, but you can’t be everywhere at once, so I’ve learned to be present in the moment,” she says.

As much as Hudson enjoys seeing her customers come up to her truck, they enjoy seeing her too, she says.

“No matter where my truck is parked, I have found that once a person finds one pop that they like, swarms of people begin to try that pop as well,” she says. “Those are the times we end up selling out. It’s a cycle we go through.”

Hudson hopes her popsicle business will make a difference in the communities that her business serves.

“Frios has given me the option to expand on my entrepreneur journey, where I ultimately get the choice to run events and meet new people every day with my Sweet Ride,” she explains. The company has also donated funds for o nonprofit and philanthropic organizations. This summer, it ran a “Back to Happiness” contest, which awarded a Detroit-area classroom free popsicles for the entire school year.

Frios is available for catering birthdays, fundraisers, corporate parties, and other events. More information on Frio Gourmet Pops is available on its Instagram and Facebook pages. 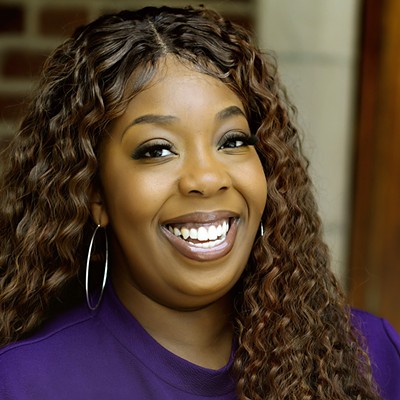 If you see Darlene, she is usually on deadline while holding a cup of coffee in one hand and chasing her twin toddlers across metro Detroit. She is a Ferndale High School graduate, a Wayne State Warrior, and a proud member of the National Association of Black Journalists. Darlene’s first love is radio. One of...
Read More about Darlene A. White
Scroll to read more Food News articles