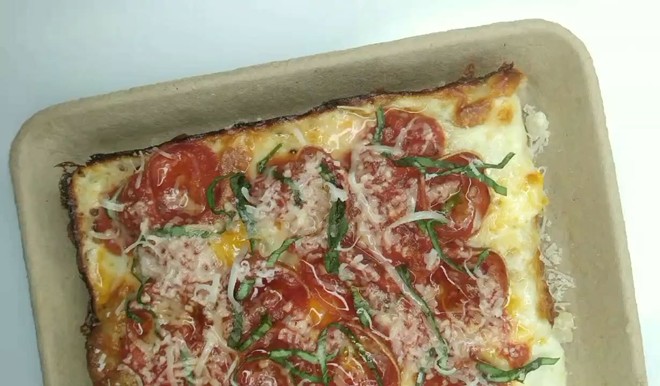 That’s the name of a Detroit-style pizza pop-up coming to Ann Arbor’s Homes Campus space starting this week. The name and menu items feature nods to the music of Eminem, including the “Sing for the Roni” pepperoni pizza, sold by the slice.

According to The Detroit News, the pop-up is the work of Joe Maino, a pizzaiolo who is just an Eminem stan and unlike Mom’s Spaghetti is not officially affiliated with the rapper, though he promises Em and fellow Detroit emcee Royce da 5’9” “eat free” on posts on his pop-up Instagram page, @slimsaucys.

Reportedly, Maino learned how to make Detroit-style pies under the tutelage of the award-winning Shawn Randazzo of St. Clair Shores’ Detroit Style Pizza Co., and opened his own spot called Hudson and Packard in Poughkeepsie, New York, before eventually returning to Michigan. Eminem dishes out his 'Mom's Spaghetti' with new Detroit diner